Videoball is a member of the growing genre of digital sports with no true basis in reality. It borrows from real-world sports like soccer and hockey, but Videoball could never exist outside of a video game. Rocket League, a comparable game, found fans thanks in part to its accessibility and balanced play, and Videoball hits many of these same notes. It and can be fun, especially in local play, but is held back in important ways.

Functionally, Videoball is Asteroids crossed with air hockey. You are a triangle that can shoot smaller triangles, charge up for a stronger shot, or create blocks to place on the field. You and your team must shoot a ball (or multiple balls) with bullets, essentially rolling it into your opponents’ goal while avoiding enemy bullets and the ball itself, which stuns you if you run into it. The structure is simple and the only input is the fire button, which gets newcomers up and running quickly. I stumbled out of the gate, but by round two I had a handle on the action and was having fun. During round three, I could already see higher-level strategies emerging.

The core game of knocking a ball back and forth by firing bullets is fun and getting four or more players together for a local match almost immediately becomes an exuberant shout-fest. The more players you have, the more the game shines. However, fewer than four is dull, making the game play like a tennis match where the ball is gigantic and moves slowly.  My local one-on-one matches dragged on, and I was happy to simply see them conclude.

Even after getting a good handle on Videoball, some aspects continued to be frustrating. Bullets move slowly, which made me feel like my attacks and counters were lagging behind my reaction time. I also found the full charge shot, which blasts the ball across the field, too easy to counter. It usually leads to you scoring on yourself – which is a frustrating loss when it happens to you, and an unsatisfying win when the tables are turned.

Different field options lead to different types of games. You choose between 35 different layouts (or use my favorite option: random), and they change the way you approach matches. Sometimes blocks in front of a goal means you have to fire from different angles, while the more extreme layouts create paths you must follow to get to the goal. Comparable games in this genre tend to stick with a single field, so I enjoyed the variety and was happy to see them provide more than aesthetic differences.

Videoball is unapologetically multiplayer-focused, but an arcade mode offers some single-player and cooperative opportunities. Early levels in this mode feature balanced fields, but matches quickly favor the computer opponent, with your goal taking up a full side of the screen while the opponents’ takes up only a portion. The mode can be played with another human teammate, and it hits a point where a second player is practically necessary. I appreciate the intention of this challenge, but I stopped having fun after the first few levels because it felt too unfair.

Online functionality for Videoball has been difficult. Few are playing online in my experience, making it hard to find games. I had to use third-party services (like Discord) to coordinate viable matches. Much like the local play, the more players present, the more fun it is – when it works. With the difficulty of finding players and the errors I encountered, I can’t recommend the game if your main goal is to play online.

With a full crew, Videoball is a lot of fun. It hits that difficult-to-balance level of controlled chaos where a lot is happening on screen, but those playing and those watching can keep track of the action. It leaves plenty of room for close calls, last-second saves, and the equivalent of the slam dunk, but playing online proved difficult and the slow firing speed kept me feeling like I was coming up short. As an inclusive party game that only takes a few moments to get fun even for inexperienced players, Videoball succeeds. But for the lone player looking to partake in a different kind of esport, options are limited. 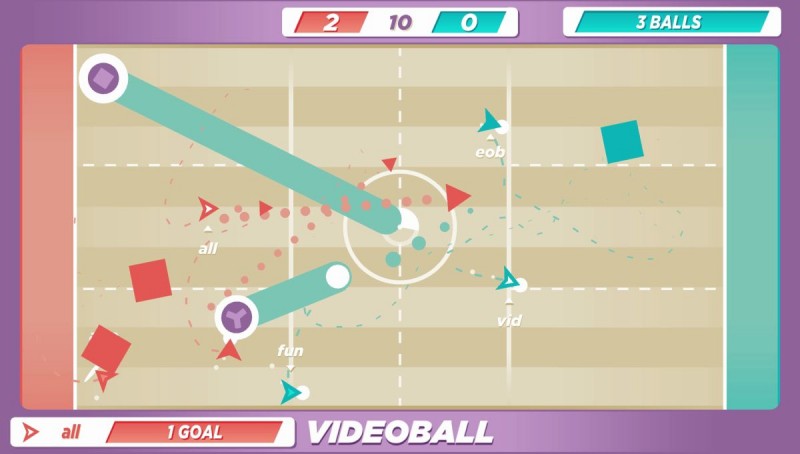 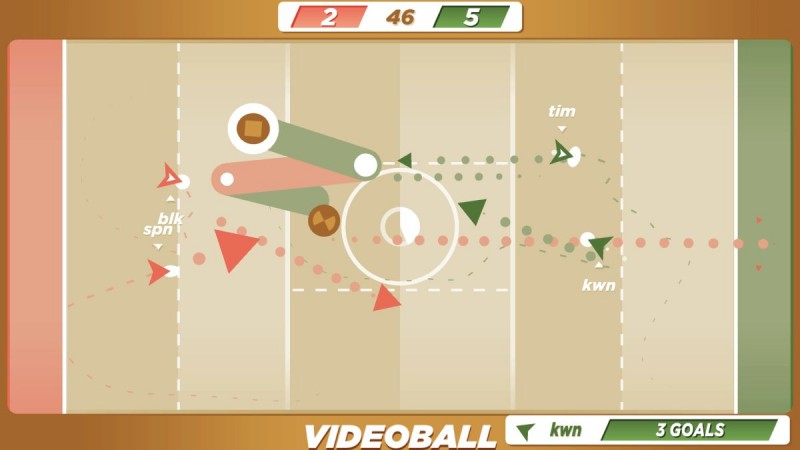 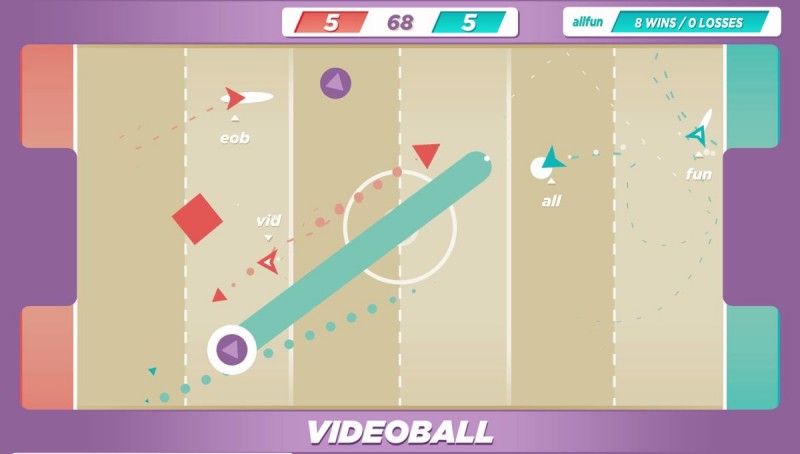 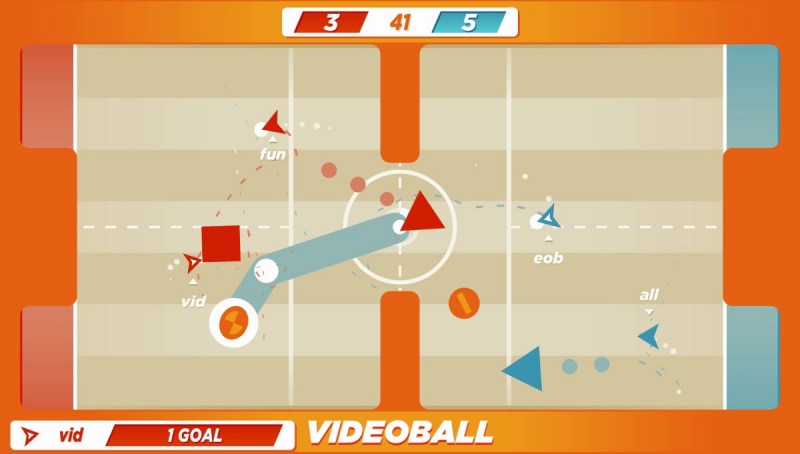 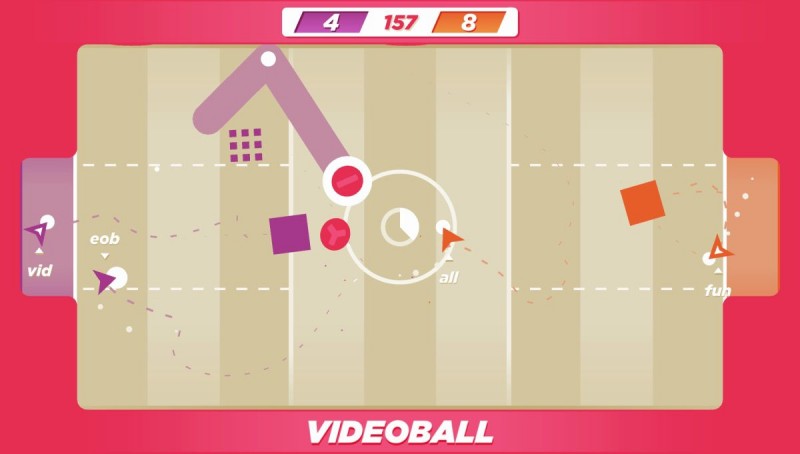 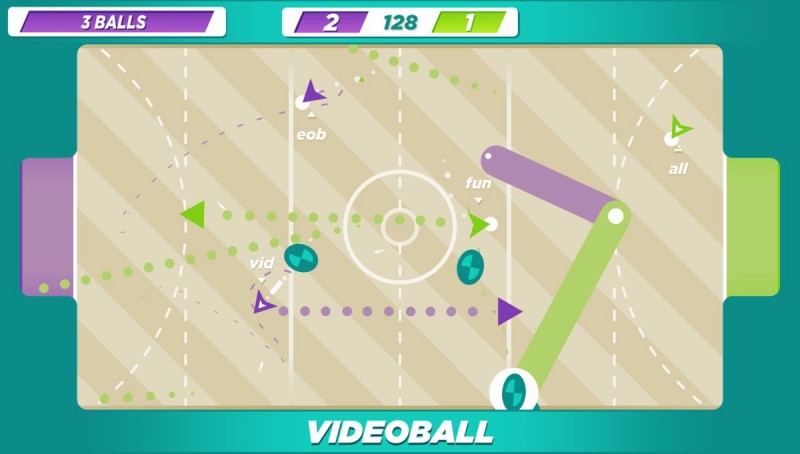 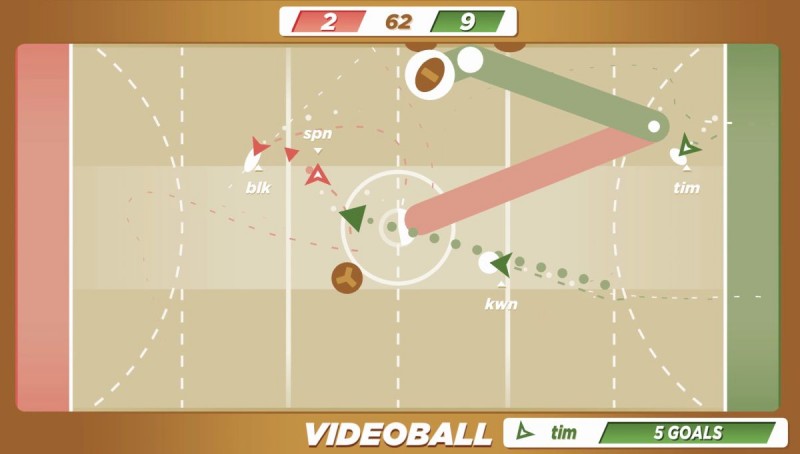 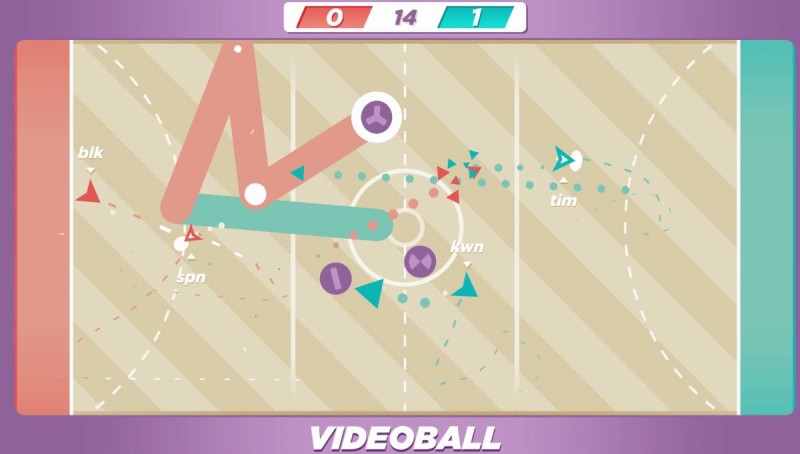 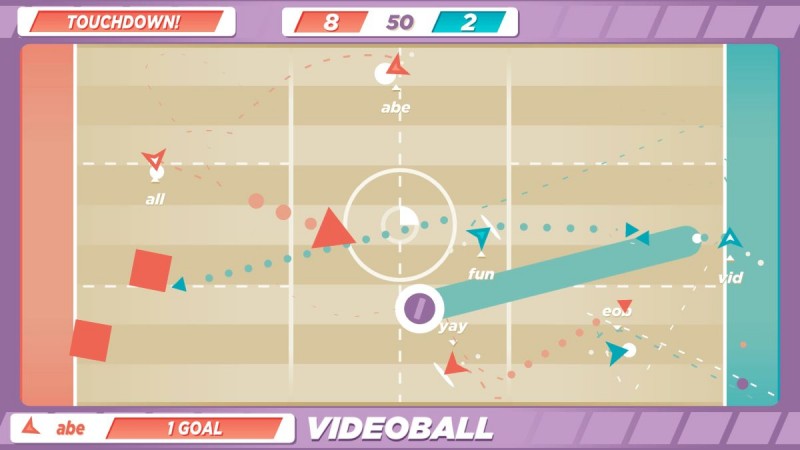 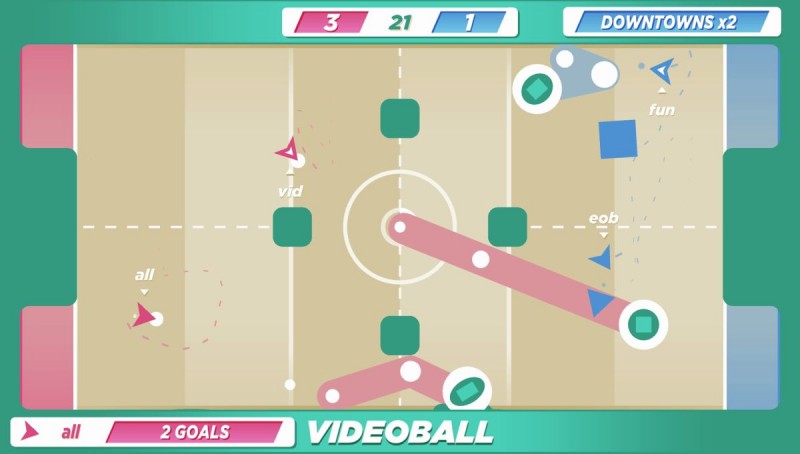 Videoball achieves fun, controlled chaos, but is held back in important ways.

Purchase More Info
6.75
i
Game Informer's Review System
Concept Take Asteroids and cross it with air hockey for a chaotic digital sport
Graphics Visuals lack character, but are clean and colorful, even though you might mistake it for a game from the ‘80s
Sound The nostalgic music recalls Pilotwings and other 16-bit compositions
Playability Controlling your triangle is smooth, but I never got fully comfortable with the movement speed of the bullets
Entertainment Getting a handful of players together for local matches leads to simple, chaotic fun, but fewer than that leads to frustration and boredom
Replay High