I enjoy when games defy easy classification, and if Velocity 2X does anything, it’s that it refuses to settle quietly into a familiar niche. Elements of space shooters and platformers are certainly present, but the focus on speed adds a racing component, some sections have light puzzle features, and an innovative teleportation mechanic adds something fresh and surprising.

Lieutenant Kai Tana is as sharp and deadly as her name implies. Flung across the universe through a singularity, she and her advanced spaceship must take on an evil alien empire, rescue prisoners, and pick up crystals to help power up her assault against the bad guys. She accomplishes these goals as she weaves her ship around enemies and through chambers of alien space stations, but regularly deplanes to dash through tight corridors filled with enemies.

Whether on-foot or in-ship, the focus is on speed. Kai is in a hurry, and the excellently mapped controls help keep her moving. When you’re running around, a short-range teleport lets her zip past walls without breaking her stride. When you’re flying around in space, the teleport lets you materialize through half a dozen closed-off chambers without letting up on the ship’s afterburners. High scores require this kind of ceaseless motion, and the sensation lends a breathless, desperate sense of urgency.

Locked areas are opened by shooting a series of switches in numbered order. These numbers are scattered across the level, both inside tunnels and out in space, and often out of order along the vertically-scrolling levels. To succeed, you need to drop long-distance teleport pods in order to return from anywhere in the level. Later stages demand constant use of this translocation ability, and result in intriguing puzzles, especially framed within the larger need for swift movement.

Velocity 2X is filled with little extras, from a collectible series of mini-game puzzles to encyclopedic notes on the game’s story and technology. However, the meat remains in the optimization of your scores on each of the 50 stages. I love the pursuit of supremacy on each level, but I wish that Futurlab hadn’t locked access to later levels by requiring high scores on earlier ones. It slows the breakneck pace of the storytelling, and may prevent some players from seeing the plot’s conclusion, which includes a final gameplay twist that’s especially neat.

Futurlab’s stellar game is challenging and unusual, and its complex controls are demanding. For that reason, Velocity 2X may not fascinate novice gamers, but experienced players will delight at its varied gameplay, spare design aesthetic, and daring speed. 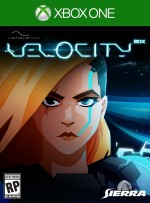 Futurlab has crafted a game of speed and precision that defies easy classification.

8.75
i
Game Informer's Review System
Concept Race through a sci-fi future that mixes space shooting with action-platforming
Graphics The smooth flow of onscreen visuals is essential for a game moving at this pace, but many of the environments look too similar
Sound The appropriately futuristic electronic beats are good, but they repeat more than I’d like
Playability Controls are immaculately laid out and responsive, but not easy to learn
Entertainment A glance at screenshots fails to tell the story; this genre-bending and innovative title is enormously fun
Replay Moderately High