In video games about war, we typically assume the roles of gun-toting soldiers who singlehandedly save the day. It’s more fun to be the hero who succeeds against the odds than a prisoner of war or an AWOL soldier, but those sadder stories are still poignant. Through phenomenal visuals and audio, Valiant Hearts: The Great War highlights the horrors faced by normal people in extraordinary circumstances – but it’s a better history lesson than a game.

Set during World War I, Valiant Hearts focuses on the crossing paths of four people and one dog. You control each of the humans at different points throughout the conflict, but you aren’t shooting up enemy soldiers. Most of the gameplay is about getting from one place to another, overcoming obstacles with your wits instead of overwhelming force. You pick items up, stay hidden from guards, and command the dog to interact with objects. It’s more of a puzzle game, focusing on atmosphere instead of combat.

Developer Ubisoft Montpelier establishes the awful conditions the characters endure through beautiful 2D art and an evocative soundtrack. The animations and character designs are instantly impressive, and the bittersweet music sets an appropriate, reflective mood. These elements come together particularly well during the sequences where you swerve around in a car trying to avoid hazards that pop up in time to thunderous classical music, but the presentation is consistently top-notch.

Despite being gorgeous, it isn’t very interesting to play. Valiant Hearts doesn’t grow as you progress; you learn most of your puzzle-solving vocabulary early, meaning that you’re often going through the motions to reach an already-obvious solution. Distractible guards, cranks with missing levers, and barricades in need of some dynamite are all common hurdles. Once you learn the basic tricks, you just repeat them over and over. Throw stuff at whatever’s dangling out of reach, have the dog pull the lever that you can’t get to, use clippers to clip the barbed wire, and so forth.

These components are rarely assembled in any challenging way, which is another issue. A puzzle game doesn’t necessarily need deep ability evolution, but the obstacles should at least require some thought. Figuring out what you need to do is usually trivial – the work comes from pushing, pulling, or otherwise getting items where they need to be. Since progressing is practically automatic, I only used the built-in hint system once in my whole playthrough (which took about 5 hours). At least the shallow gameplay gives you plenty of free time to soak up the cool events and pretty animations that are constantly swirling around you.

I admire how, despite including some major battles from World War I, Valiant Hearts puts the emphasis on atmosphere, not action. You can dig through lots of intriguing historical data from the pause menu, giving you a greater sense of the technology and hardships of the era. Actual letters from WWI soldiers inspired the events, making the whole game a tribute to those men and women who fought for their countries.

Though the message behind Valiant Hearts is noble, the storytelling is thin. Mumbles, gibberish, and pictures in word bubbles comprise most of the characters’ interactions. It’s endearing at first, but isn’t an effective way to tell a nuanced tale of love and sacrifice. Sparse narration and diary entries fill in the gaps, but most characters remain vaguely defined, which makes it hard to care about them. That doesn’t mean there aren’t some powerful moments, but they don’t have as much of an impact as they could.

Even if the starring characters don’t completely come into focus, Valiant Hearts still succeeds at conveying a human story. War isn’t all about rifles and grenades; we see soldiers playing cards, doing dishes, sleeping in bunks, and petting dogs. More than the puzzles or the overall story, these quiet moments – along with the wealth of historical background – show a mundane side of war that we rarely see in games. It may not be challenging or action-packed, but Valiant Hearts provides some thoughtful and sobering looks at what life was like on the front.

This review pertains to the PS4 version. The game is also available on PlayStation 3, Xbox One, Xbox 360, and PC on June 25.

7
About Game Informer's review system
Concept
Stories from World War I as seen through the eyes of four heroes and a dog
Graphics
Fantastic, stylized visuals make the atrocities of war memorable, but less grisly
Sound
Minimal voice work lets you focus on the somber music
Playability
Controls are straightforward and functional. You are mainly walking around, picking items up, and then using those items
Entertainment
While the puzzles and story aren’t especially rewarding, the overall tone is still interesting and successful
Replay
Moderately Low 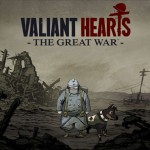