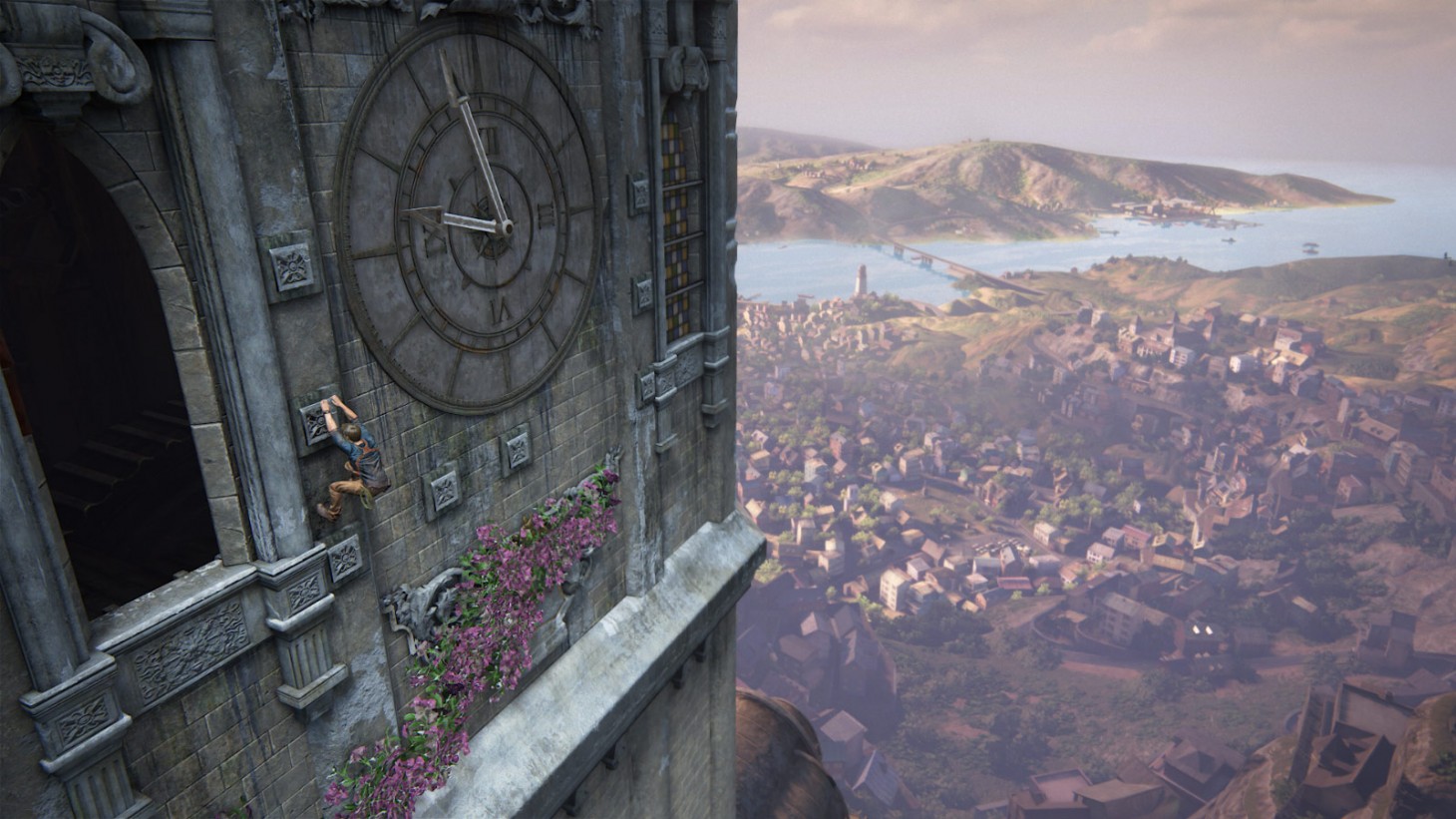 The Grim Reaper’s scythe rarely falls upon treasure hunters. The earth collapses beneath their feet, arrows fly from walls, and giant boulders give chase, but these adventurous souls cannot be stopped until they locate an ancient secret. Their expeditions are brimming with rollicking fun, but their stories always end the same way: They live another day, and one less treasure is lost to the world. We know what we’re getting from these serialized stories, and we love them for it. But unlike Indiana Jones (who is still chasing myths and legends at age 73) and Lara Croft (who is turning back the clock), Naughty Dog has said Uncharted 4: A Thief’s End is Nathan Drake’s final chapter. The subtitle alone paints an ominous picture for the famed hero, but what is it hinting at? Does he die? Disappear without a trace? Retire atop a mountain of gold?

That question turns A Thief’s End into a ticking time bomb of a narrative. As this story unfolds, we see Drake’s entire life come into frame – from key moments in his childhood that helped shape him to the ordinary days he spends at home with his wife, Elena. We get to know Drake intimately; we know what he’s sacrificing and what drives him. Drake has settled down and appears to be content living out the rest of his days working nine to five and heading home to see Elena. The unexpected arrival of his older brother Sam, who was believed to be dead, pulls Drake back into the treasure hunting game. He is reluctant at first, but Sam’s life hangs in the balance, so Drake has no choice.

Naughty Dog paints Drake in a fascinating light, giving you enough narrative rope to want to save or strangle him – and I wanted to do both at various times in this adventure, given the choices he makes. Though we’re just starting to explore new sides of Drake, and we are just meeting Sam, a sense of finality is sewn into all of the character-building.

On one hand, it feels like the start of something new, with Drake rediscovering life and the thrill of the hunt with his brother. On the other, it feels like an end, with Drake recklessly throwing everything away to hastily answer the call for adventure. The scale is constantly shifting between the two, and the emotional tension tied to these moments is one of Uncharted 4’s most powerful elements. It’s a hell of a story that shifts between Uncharted’s patented “everything is suddenly exploding and everyone is yelling” design to the slow and heavy emotional tone of The Last of Us. There’s clear inspiration from The Last of Us in Uncharted 4, and it’s a better game because of it. While Nathan and Sam are front and center for most of this journey, one of the most interesting characters to follow is Captain Henry Avery, a dead pirate who we only learn about on pieces of paper and riddles scrawled on cave walls. He's written remarkably well by Naughty Dog, turning most secrets into tantalizing story material. Avery has concocted the mother of all treasure hunts, which ends up being a fascinating reflection of a pirate in his prime, and a fun breadcrumb trail to follow.

This hunt takes Drake to hidden corners of the world, often holding elaborate puzzle contraptions that produce legitimately fun and challenging gameplay moments. The adventuring spirit is alive and well in this installment, and the revelations at the end of it all are fantastic, as they show the great lengths Avery went to protect his treasure. It wouldn’t be fair of me to list the locations Naughty Dog brings to life, but they all have grandeur and spectacle, from the scale of a scenic landscape to the wealth of detail included in a house that players don’t even need to enter.

A Thief’s End doesn’t have that big, iconic set piece moment like the previous Uncharted games did (i.e. the train on the cliff, the boat capsizing, and the cargo falling out of the plane), but succeeds as a collection of smaller “I can’t believe we survived that” sequences with houses crumbling, armored vehicles exploding, motorcycles racing dangerously, and Naughty Dog’s artists pulling out all of the stops to make every second of action look as chaotic and beautiful as possible. As visually stunning as many of these moments are, the excitement they deliver has diminished over the years. The thrill of a platform falling apart as soon as Drake lands on it doesn’t get the blood racing anymore – it’s an expected element that, by the fourth installment, seems fairly commonplace. Naughty Dog finds new ways to make things go boom – there's plenty of fun in that – but I was never hit with the that one defining moment I had to tell everyone about like I did in Uncharted 2 and 3. The action may feel somewhat routine at times, but the feeling of exploring lost worlds is heightened in this chapter. The environments are much wider, sometimes offering multiple traversal solutions and optional areas. In past Uncharted games, I just ran forward, following the linear path laid out before me. In this game, many of the environments made me pause, analyze my surroundings, and figure out how I could navigate them. They offer a satisfying puzzle element we rarely saw in the past. The player now has some ownership over how a destination is reached, and the paths aren’t always easy to pinpoint (although some object coloring is used to lead players along).

Drake’s new grappling hook enhances the exploration, and is often the tied to harrowing platforming sequences. It's also flat out fun to use. The grapple is put to good use in combat and puzzle solving. As forward-thinking as Uncharted 4 is with the new grapple mechanics, the levels offer an odd abundance of old school box-pushing puzzles, which sometimes feel like they are there just to slow player progression. The platforming is as briskly paced as it's been in the past, and is often done with the world exploding around Drake. But again, this element has lost some of its magic with time.

Some of the environments are so vast that they take on the illusion of open worlds, giving the player even more freedom to explore, often with a vehicle. These areas change up the pacing nicely and embrace the essence of adventure in a slightly different way. Since Drake is often with Sam (or other characters), light team-based gameplay is periodically thrown in (think The Last of Us). Sam helps you reach ladders and boxes, lends verbal feedback for navigation and riddles, but his greatest contribution is assisting in combat.

He can tag and grab enemies, provide covering fire, perform double-team melee moves, and is lethal with a gun. The hand-to-hand fighting is greatly improved, giving each punch a cringe-inducing (but satisfying) smack. The gunplay is still a little loose, but the enemies are smarter now, which means Drake either has to rely on stealth more (which works well and is immensely satisfying when entire zones are cleared silently), or strategically pick off targets before they advance or flank. Combat never feels like a thrown in chore. I enjoyed all of the encounters and found them surprisingly empowering, especially when the grapple swing is used to effectively launch Drake onto a foe.

A Thief End’s is the best Uncharted yet, delivering a story I didn’t want to end, and an adventure that concludes with a hell of a payoff. The “wow” factor of the world exploding under Drake’s feet has diminished in the years following Uncharted 2, but those moments are still effective, and a true showpiece of the developer’s exquisite craftsmanship for world and gameplay design. All four of Naughty Dog’s games culminate in A Thief's End in a fitting and cohesive way that fans should appreciate. I hate seeing Drake go (especially when he’s in his prime), but I’d rather see him go out on top like he is here than be tasked to find a crystal skull or some other poorly fabricated MacGuffin decades from now.

Multiplayer Worth Your Time

Uncharted 4 offers a fully featured multiplayer experience, complete with weapon leveling and a bevy of fun unlockables, like gear for all of the playable characters. The combat makes use of the same mechanics from the core game, including the grapple, which can be picked up and used as melee weapon. Thanks to nice map designs, the cover-based combat exchanges are fevered, and rarely experiences lulls in the matches. Currency earned mid-match can be used to purchase power-ups, such as henchmen that fight at your side and strange magic objects like towers that shoot ghosts at enemies.

I’m not a fan of the magical element, but I had a blast with the combat, and felt the urge to play more to unlock new content. My multiplayer time occurred solely on pre-launch servers, but even with hardly anyone playing, pre-match loading was extensive, and I was booted from queues numerous times. Here’s hoping the pre-match functionality performs better post-launch. Uncharted 4 excels as a single-player experience, but make sure you give the multiplayer a whirl. 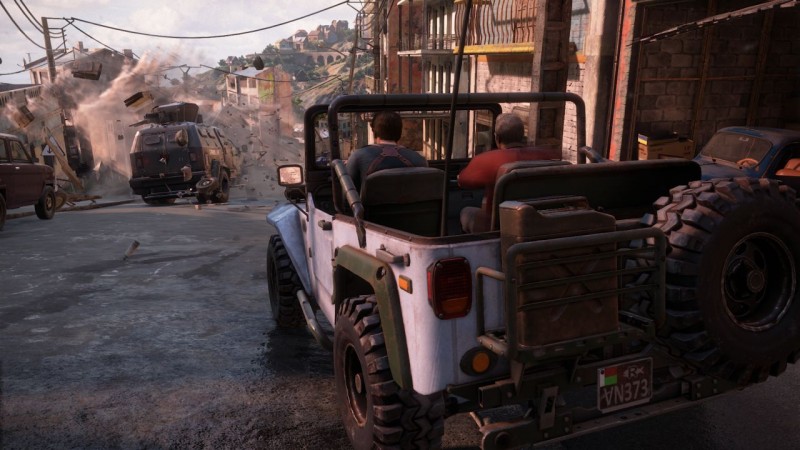 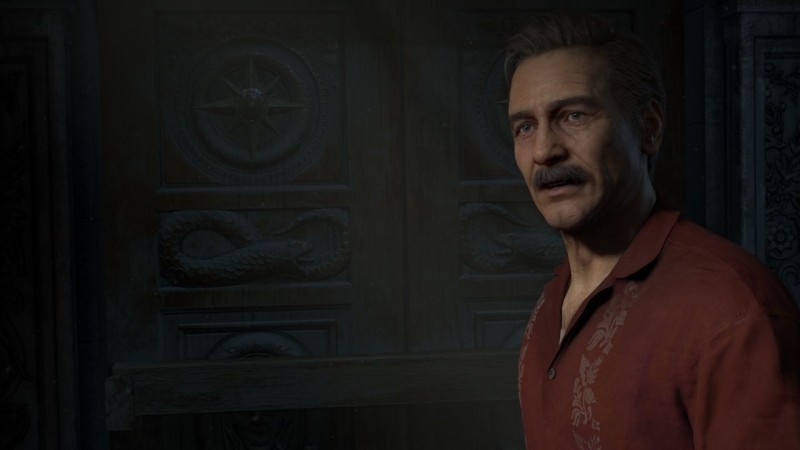 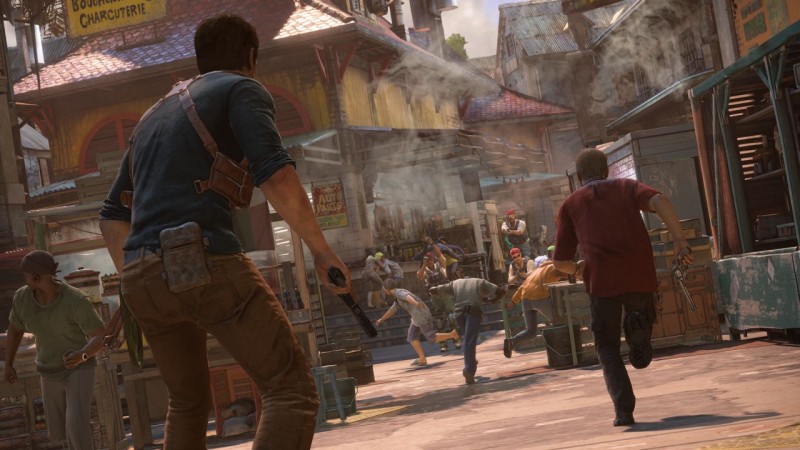 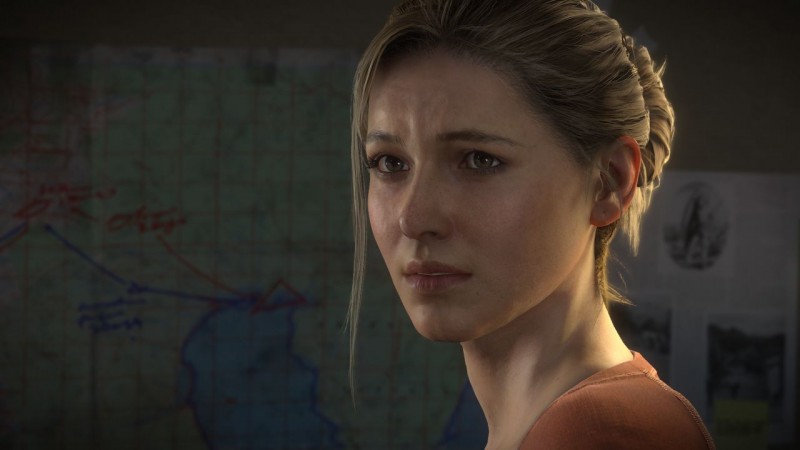 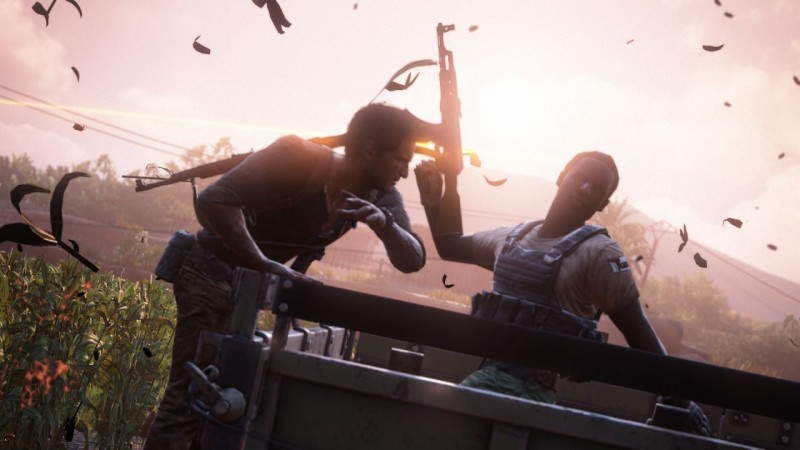 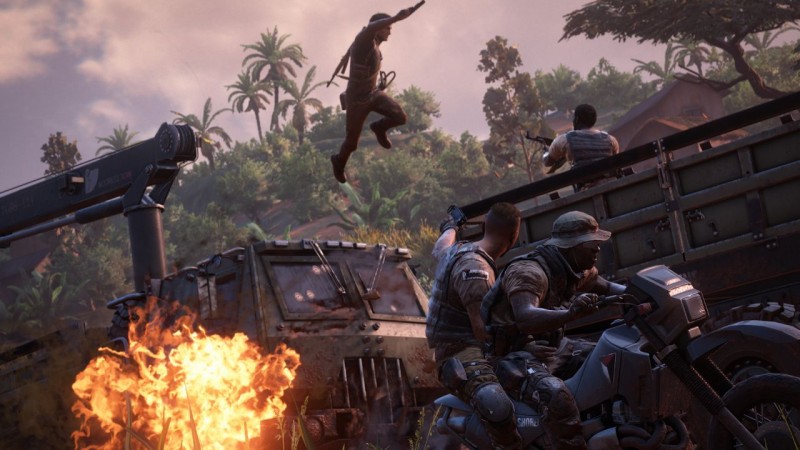 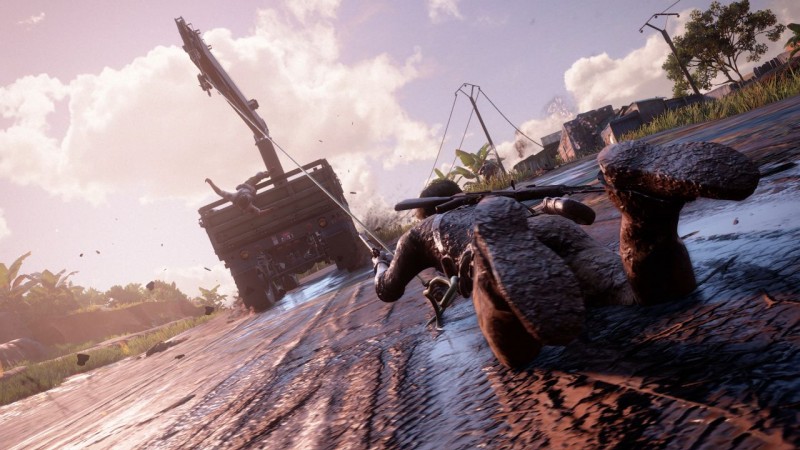 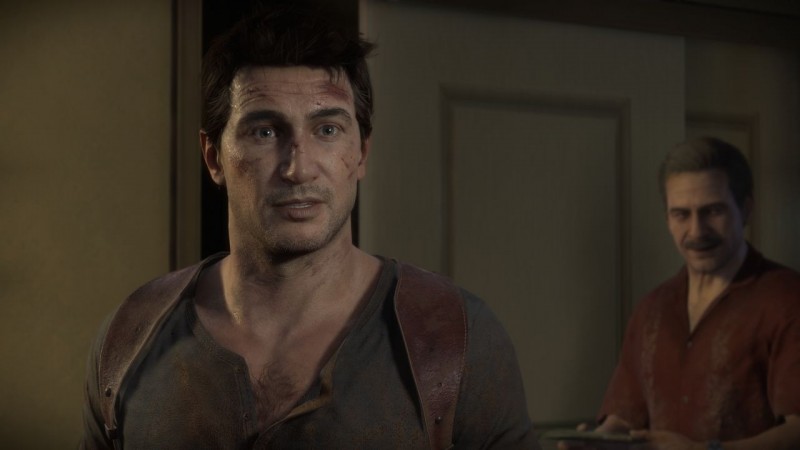 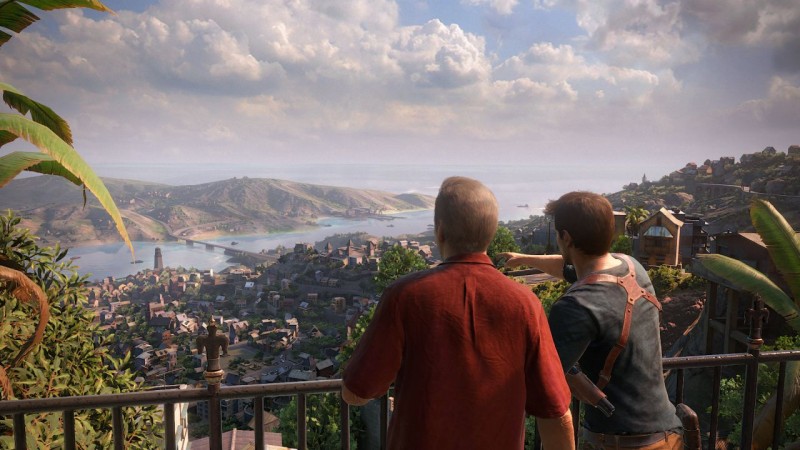 Nathan Drake's final adventure is his finest yet.

Purchase More Info
9.5
i
Game Informer's Review System
Concept Nathan Drake’s final adventure is as emotional as it is exciting, a true testament to Naughty Dog’s storytelling and gameplay skills
Graphics A work of art. Few details are spared in making the characters and world come to life
Sound Nolan North and Troy Baker make a great team, and are almost always cracking wise. The score is also used expertly for tension and drama, sometimes drowning out all sound to heighten a moment
Playability The awe factor of the world blowing up around Nathan Drake isn’t what it once was, but the combat is better, and the exploration offers more gameplay and discovery
Entertainment The best Uncharted yet. It hooks you emotionally early on and keeps you locked in place as the thrill of the hunt for a lost treasure takes shape
Replay Moderately High