UFC athletes spend months – even years – on special diets, working out, and practicing their martial arts; they train their bodies until their whole routine flows like a well-oiled machine. Anyone interested in dominating the Octagon in THQ's new UFC 2009 Undisputed will need a similar prizefighting spirit if they want to master the complexities of the combat system.

Like most good wrestling titles, UFC has a full-featured career mode that will have you training and sparring to climb the championship ranks. The game's AI is pretty easy to exploit early on, but this mode is a good way to learn Undisputed's complicated fundamentals. Retired career fighters can be taken online in a series of exhibition matches, but if you want the real deal, you can step into the skin of masters like Georges St-Pierre or Forrest Griffin in the Classic Fights mode – a collection of scenarios that let you reenact some of the UFC's more historic rumbles.

The game's wealth of combos and grapples are made even more impressive by Undisputed's nearly flawless collision detection and animation. These brawlers move convincingly like the real thing. It doesn't hurt that this is one of the best looking wrestling titles to date; I never thought I'd be drooling over a bunch of half-naked men jumping on top of each other, but THQ has proven me wrong.

The meat of the game is its deep – though not easily mastered – grappling ground combat. After you take your opponents to the mat, you'll be in a constant battle for the best position to hook them in a submission hold. The mechanics for this portion of the game feel a little awkward at first, but you'll eventually get the hang of how to deliver the pain. Once you start to go up against more skilled opponents, the ground combat becomes a strategic battle of blocks, reversals, and escapes.

Given that the standing combat and the ground game play out differently, this is kind of like two fighting games in one. You'll have to master them both if you want to be the ultimate fighter. If THQ's history with the WWE is any indication, Undisputed is likely the first entry in what will be a yearly franchise. Thankfully, the series has started off with a solid foundation. 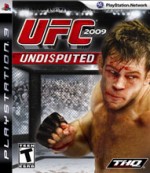 UFC 2009 Undisputed
Purchase More Info
8
i
Game Informer's Review System
Concept The rising star in professional fighting, the Ultimate Fighting Championship, gets a rich fighting system courtesy of the developer behind WWE SvR
Graphics The animation system and collision detection are impressively realistic
Sound Announcers Joe Rogan and Mike Goldberg do a great job telling the play-by-play without being overly annoying. We still wish you could knock Joe Rogan around in the ring – maybe next year
Playability A steep learning curve, but it's something that fighting fans can really embrace
Entertainment The disposable story is wrapped around a good career mode that will have you training your fighter until he earns the belt
Replay Moderately High