This Time We're Laughing With Two Worlds Instead Of At It
by Phil Kollar on Jan 25, 2011 at 06:45 AM
Publisher: SouthPeak Games
Developer: TopWare Interactive
Release: October 5, 2010
Rating: Mature
Also on: PlayStation 3, Xbox 360, PC

Ever since Jeff Cork and I fell in love with the endearing-but-broken survival horror game Deadly Premonition last year, we've discussed whether there is a place in our industry for B-games -- the interactive equivalent of low budget, badly acted (but strangely enjoyable) B-movies. Two Worlds II presents the latest argument in favor of this new style of game.

Like its 2007 predecessor, this sequel has significant problems. Though it features a new and improved game engine, slowdown occurs frequently, especially when you or enemies start slinging spells that put the in-game physics to work. The core story is generic, and the sloppy writing sometimes fails to explain what's going on or why characters are acting a certain way. Unlike the original, though, Two Worlds II is playable, with an improved user experience that shows how Polish developer Reality Pump has grown.

After a well-paced series of tutorial missions that set the stage for the story and introduce the numerous systems at work, players are dropped onto an island that comprises a small portion of the total game world but has tons of quests. The goals have plenty of variety, like go here, kill this jobs, pickpocketing missions for the thieves' guild, and exploration quests that take place in maze-like ancient tombs packed with hidden treasure. Your quest log quickly becomes overcrowded, but current objectives are highlighted on the map and are easy to navigate to thanks to a teleportation stone.

Two Worlds II's various mechanics weave together in a complex but enjoyable pattern. If you want to stick to cutting down enemies with giant blades, you can. Gamers looking for more depth can employ the crafting system, which allows you to break down and build up almost every weapon or piece of armor you receive. The spell system is even better; as you level up your various skills and collect spell cards, you can build your own set of insane, overpowered abilities. Reality Pump made the wise choice of letting players break the game's balance for the sake of fun.

As I mentioned, the overall story isn't anything new -- the big baddie from the first game is now the emperor, and the main character must join a resistance against him to try to rescue his sister -- but the tone of your interactions with NPCs is surprisingly original. From subtle references to the first game's poor quality to over-the-top scenarios such as encountering a woman who wants to feed you to her undead husband, the game's self-aware, tongue-in-cheek attitude is infectious.

The art design also impresses. Although character models look rough, environments, armor, and weapons feature enough detail that I took time to look over my character whenever I equipped something new. Where the original Two Worlds was mostly based in generic medieval fantasy motifs, the Two Worlds II environments draw from Middle Eastern, Egyptian, and Asian influences. Even if the story and the process of cutting down hundreds upon thousands of beasts is the same old thing, at least you're doing so in a lively African savannah instead of boring grasslands and forests.

If the huge single-player game isn't enough for you, Two Worlds II also contains a handful of co-op and competitive multiplayer modes. The co-op chapters in particular provide a nice distraction, but it's frustrating that equipment and levels don't carry over between single-player and multiplayer. The other multiplayer options are forgettable.

Like other games that could fit under the B-game label, not everyone will embrace the elements I enjoyed in Two Worlds II. If you're looking for a lengthy and humorous (if somewhat unpolished) hack-and-slash RPG to tide you over while you wait for Dragon Age II or The Elder Scrolls V: Skyrim, it's worth giving Reality Pump a second chance. 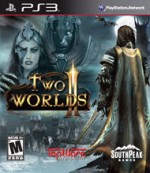 7.75
i
Game Informer's Review System
Concept Take one of this generation's worst games and turn it around with a vastly improved sequel
Graphics Environments and equipment are beautiful -- as long as you don't look too closely
Sound The sooner you learn to ignore the terrible voice acting, the sooner you can enjoy the game's quirky sense of humor
Playability Quest objectives are laid out in an easy-to-understand manner. By the time you hit level 15, you'll be taking out hordes of enemies with no problem
Entertainment A lengthy, occasionally busted, and surprisingly fun hack-and-slash RPG
Replay Moderately High