With its October 4 release date quickly approaching, fans of car combat should have their calendars marked for the return of Twisted Metal. It’s been ten years since the series has seen a full-scale console release (Head-On for PS2 was a PSP port), and the overall vehicular combat scene has been a ghost town in the last decade. Things are about to change thanks to the franchise’s imminent return, and we’ve got all the info you need to get you up to speed. Despite repeatedly stating on Twitter that he was not working on a new Twisted Metal title, David Jaffe and Eat Sleep Play co-founder Scott Campbell appeared at the Sony E3 2010 press conference with news to the contrary. Flanked by Sweet Tooth and his iconic ice cream truck, Jaffe announced that there would indeed be a new Twisted Metal, and it would be arriving on the Playstation 3.

Once the cat was out of the bag, Jaffe began to speak about previous incarnations that didn’t get much further than the concept art phase. Twisted Metal: Apocalypse was set in a gritty post-apocalyptic world, but was eventually scrapped thanks to the numerous games on the market set in similar environments. Another idea made the car combat series resemble Rockstar’s Midnight Club. On the topic of this version, Jaffe stated “The original version of this game was much more urban and Midnight Club. None of the crazy characters were there, they were much more normal. As we went through production we got our Twisted vibe back.”

Even with the team getting their “Twisted vibe” back, they didn’t forsee it becoming the full-scale retail release that it eventually turned into. In an interview I conducted last year, Jaffe told me that it was initially planned as a $9.99 or $12.99 PSN title. "As we started development, there was a sense of ‘hey, we could entertain a lot more people with this, but it means we’re gonna have to have more levels, more cars, more modes.’ Every four or five months we’d have meetings with Sony and be like ‘We really need a single player now, and we really need some more multiplayer modes.’ By the end of it, it kind of evolved into what it is now. I think it evolved because what we saw so early seemed to have so much potential,” said Jaffe. Previous entries in the series featured numerous characters, each with their own reason for entering the tournament. Upon winning, Calypso typically granted their one wish by twisting their words in an unfortunate fashion. Rather than following this oft-repeated formula, the new Twisted Metal will focus on four factions rather than an assortment of individual characters.

Each faction will be led by a familiar character - Sweet Tooth leads the Clowns, Preacher leads the Holy Men, Mr. Grimm leads the Skulls, and Dollface leads the Dolls. You’ll play as one of the faction leaders, and various live action cutscenes will tell the story as you progress. “The new [videos] aren’t CG, and they aren’t 2D Flash cartoons. They’re live action, sort of a cross between full-motion video and comic books come to life. In terms of comparing it to the other two games’ tone, I would say these aren’t as dark as Black in the sense that they’re really pushing boundaries of taste. We don’t have a preacher crucifying himself to a wall or drowning a baby, we’re not going to that level. But the actual stories themselves and the characters themselves are actually more sad and darker and twisted and the stories are a little more psychological Twilight Zone than they were in Black...I think it’s got a bit more psychological creepiness to it than the full-blown gorefest that Black was,” says Jaffe.

That quote comes from last year, before we heard the news that Twisted Metal would scrap its Teen rating in lieu of a violence-embracing Mature. Jaffe said "Without blood, it felt a little weird, frankly.” Whether we’ll be treated to Black’s “full-blown gorefest” or simply seeing a little more blood isn’t known yet, but it should give Eat Sleep Play a little more breathing room in terms of content.

Series fans are used to a small-scale mid-boss and a larger final boss encounter, but this entry promises three huge boss battles throughout the campaign. I battled the Iron Maiden at E3 this year, and it was a multi-stage ordeal featuring a gargantuan robotic doll. Racing through a canyon while this monstrosity launched barrages of explosives at me felt more action-packed than any boss fight in series’ history, and it certainly makes me excited to see what the other bosses have in store. A large variety of vehicles have been turned into scrap metal throughout Twisted Metal’s 16-year existence, and this new entry will be no different. Here are the vehicles we’ve seen so far:

Unlike previous entries in the series, your driver in multiplayer won’t determine your vehicle. You can swap between modes of transportation after you die, so you won’t be stuck with an unfortunate vehicle choice for the entire duration of the round. Many of Twisted Metal’s trademark tools of destruction will be returning this October. A handful of attacks will be new, such as the ones that involve a passenger-side driver leaning out the window. In addition, each vehicle will feature two special attacks instead of the trademark one. Here are the confirmed weapons as of this writing:

Players will also have access to an energy bar for a handful of other abilities. Rather than having to memorize a series of d-pad inputs like in the past, you can now activate each of these with only one press of the d-pad. Land mines, shields, EMP blasts (replaces freeze), and rear-fire are all one touch away, and will be moderated by a constantly-recharging energy bar. Whereas some entries of the series (2-4) featured a “world tour” theme that took the tournament to various real-world cities, others (the first game, Twisted Metal: Black) opted for an “Anytown, USA” vibe. This new edition will fall into the latter’s camp, with unspecific environments just begging to be ripped apart. “The battles are in places that you can relate to. They’re not exotic locations, they’re all places that you’ve probably driven your car before is kind of the idea,” said Jaffe. “If you haven’t driven your car through it, you’ve probably looked at it and said ‘man, that would be fun to drive a car there.’ Places in your own backyard for the most part is the mantra.”

Not all of the locations will be something you’d see on your drive to work, however. Blackrock Stadium is specifically built for the tournament, and features lava pits and other obstacles. Jaffe stresses that the areas won’t get too insane, however. Speaking on Blackrock Stadium, he said “Well, it’s not set on a pirate ship going through outer space.”

Few locations have been confirmed as of this writing. We saw an urban stage during several demos, as well as a small town location featuring houses, churches, and a movie theater. Knowing the series, we’re willing to bet at least one area will see us ramping our vehicles across rooftops. While the series attempted to bring the carnage online with Twisted Metal Black: Online, the time wasn’t right. Most PS2 owners didn’t own a network adapter, and online multiplayer wasn’t yet a console gaming phenomenon. Because of this, the new Twisted Metal will mark the first time many of the franchise’s fans will take the action to the internet. Its campaign can be played four-player either locally or online, and 16-player multiplayer modes are sure to extend its replay value significantly.

Multiplayer staples like deathmatch and last man standing will be available, but the most intriguing mode we’ve seen so far has been Nuke. Shown off at E3 last year, it combines many different objectives into one ridiculous mode. Your initial objective will be to capture the rival faction’s leader and drag them to your team’s missile launcher. From there, you have to launch them (along with the nuke missile) towards a giant effigy that symbolizes your enemy. As it soars through the sky, your rival team will need to do everything in their power to shoot it down before it reaches its target. Twisted Metal 1 and 2 were huge hits for the PSone, and Black followed up on its success on the PS2 in 2001. Things have changed in the last ten years, however. What we’ve played of the game seems fantastic, and we’re hoping it resonates with multiplayer-focused gamers in 2011. Jaffe has expressed concern over people within Sony that “don’t really get it,” but gamers will ultimately decide how much success this car combat revival sees when it releases this October. 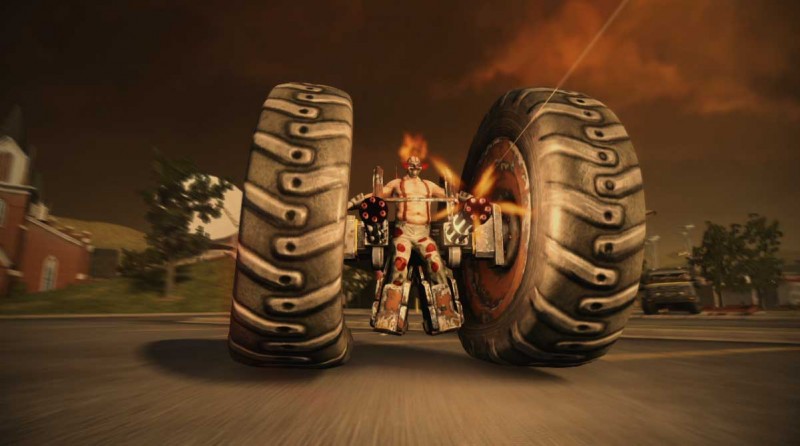 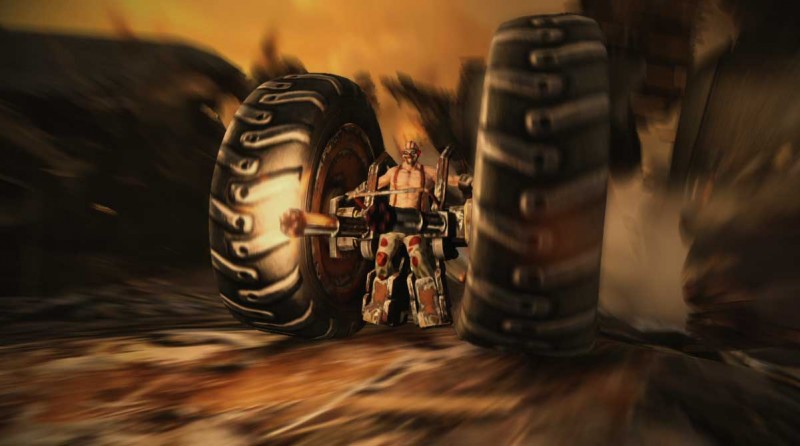