My affection for Tropico 3’s flavor of campy economic simulation is no secret; the PC version has held me entranced for months (read my review here). I’m happy to report that the delayed Xbox 360 port is nearly as good, and gives console players a chance to dig into a genre that traditionally hasn’t had much of a presence beyond the PC universe.

As El Presidente of a small country in the Caribbean, players have to juggle several factors as they try to develop their impoverished island into a viable economy through commissioning buildings, setting tax rates, issuing edicts, and the like. The several factions of your people (capitalists, religious folk, nationalists, etc.) must be mollified lest they vote against you or even rebel. The U.S. and U.S.S.R. are all too interested in poking their superpowered noses into your business, so you have to take their wants into account. Of course, the national treasury is an ever-present concern as well. Keeping all of these balls in the air lends constant challenge and tension to the gameplay, and effectively has me glued to my island for hours at a time.

The campaign offers dozens (if not hundreds) of hours of playtime in scripted scenarios that twist the basic formula in entertaining ways. One might give you dozens of unskilled refugee immigrants, while another has you choosing whether to let a superpower buy the rights to build an army base on your island. Each mission has specific goals, timeframes, and challenges. Developing ways to cope with the frequent curveballs thrown at you is half the fun.

Sandbox mode in Tropico 3 is less compelling. Once the money is flowing in from a stable, advanced economy, your problems are simple to buy your way out of. It’s amusing enough to build a functioning city, but the challenge and rewards just aren’t there.

A solid interface makes this Xbox 360 port a reasonable – though not ideal – way to play Tropico 3. A few uncommon actions, like setting worker wages and hiring foreign specialists, are noticeably harder on a gamepad. Other than that, there’s very little between you and the amusement of having your own private banana republic. 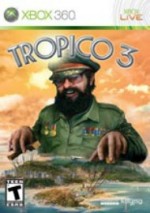 This city simulator is one PC game that makes its way to console largely intact.

Purchase More Info
8.75
i
Game Informer's Review System
Concept Build a functioning economy on a mid-20th century Caribbean island while keeping the respect of your people and decent relations with both the U.S. and U.S.S.R.
Graphics The cluttered UI isn’t ideal and some of the fancier fullscreen effects from the PC version are missing
Sound The radio broadcasts are clever and informative the first few times. The next several hundred, not so much
Playability Is gamepad control as precise or responsive as a mouse and keyboard? Of course not. It’s entirely playable, though
Entertainment The solid gameplay, variety of scripted scenarios, and sun-dappled charm of Tropico’s jungle islands combine for a solid experience
Replay High