The franchise's traditional side-scrolling racing/platforming stages, physics-based gameplay, and cartoony veneer are at home on tablets (though it is also available other iOS devices). The comforting surprise is how well the touch-based controls accommodate the series' subtle interplay of weight, acceleration, and braking, as well as its mid-air corrections and potential difficulty.

The touch controls naturally don't have the fine finesse of the console versions, but they're more than up to the task. They convey the exuberant feeling of holding onto the handlebars for dear life and instill the confidence that you're capable of a better run. That being said, the difficulty curve in Frontier is shallower than other Trials titles. The easier courses drag on for the first dozen or so levels – perhaps by design.

Trials Frontier is a free-to-play title with timers in place to mete out how fast fuel refills or the implementation of purchased upgrades. Paying real money to buy gems is a shortcut around the timers that makes upgrading easier and mitigates fuel usage. You can earn gems naturally, but paying is the only surefire way to get what you need.

You can make your way through the game without paying any money, but some of the timers are too inconvenient. Bike upgrades can take over three hours per part, and you have to wait for your fuel to replenish, too. On top of this, the payouts for the crafting missions (some of which are required) rely on a random loot wheel. Getting an unneeded part means you either have to spend precious fuel to re-race the stage, or gems to re-spin the wheel.

The unfortunate upshot of all of these layers of subterfuge is not that you may spend some money, but that you get bored re-racing tracks you've mastered. Appropriately, Frontier's progression of races is easier than other Trials games. The process is bloated to drain your resources in the free honeymoon period, with the more interesting courses not appearing until after your rider reaches about level 12. Even if you do spend some money for gems and fuel to bypass the timers, you still have to re-race tracks for bike blueprints and to craft parts.

It's not enough that Trials Frontier has mastered the gameplay of the series on its new platform. The inflated structure that surrounds it – whether you pay or not – obscures what makes Frontier worth playing.

7
About Game Informer's review system
Concept
The series makes itself right at home on the iOS/free-to-play scene, for better and worse
Graphics
The explosions, scrolling backgrounds, and track landscapes pop enough to notice while not distracting from the important work at hand
Sound
Not much for music or sound effects, but that’s not a bad thing
Playability
The touchscreen gas/brake and weight shifting work very well
Entertainment
Frontiers' absorbing core gameplay is willfully obscured by the repetitive structure
Replay
Moderate 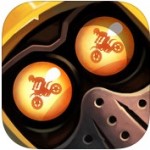