Transformers: Rise of the Dark Spark

To give credit where it’s due, Rise of the Dark Spark elicits some genuine emotion from this Transformers fan. Unfortunately, those emotions are anger and disappointment. Activision and Edge of Reality have squandered the good will established by High Moon Studios’ strong Transformers Cybertron games, releasing a product that fails on several fundamental levels. It isn’t entertaining, doesn’t remain true to either of the disparate storylines (which should never have been linked), and can’t overcome technical performance issues.

There may have been a time that this new Transformers game was planned as another installment in the Cybertron series, but has since been co-opted as a movie-tie in, even though they’re different versions of the same story. It’s kind of like doing a crossover episode of the 1978 Battlestar Galactica with the 2004 version. The story sees the Autobots and Decepticons competing over a MacGuffin called the Dark Spark. Two sections starring the movie characters bookend a larger middle section set on the Transformers’ home planet, but the occasional moments that nod to the broader lore are ruined because the fundamental crossover concept is so ill-advised.

The Transformers franchise doesn’t exactly live and die by great storytelling, so the narrative missteps could be forgiven if the action held up. It does not. The first few minutes of gameplay offer an ample illustration of Rise of the Dark Spark’s most potent problems. Within minutes of hitting start, you’re in the first of many wave-based fights that last too long. Bland, colorless buildings frame the environment as a poorly animated character runs forward along concrete platforms that exhibit little texture or variation. Metal, in particular, looks washed out and oddly reflective, which is a big problem in a game about massive robots. Enemies begin to spawn and run around in haphazard patterns that stand in for competent A.I. tactics. Balancing is shoddy at best; some enemy groups are too fragile to provide a meaningful challenge, while others include enemies that hit too hard and force a restart.

Prospects improve marginally when the story abruptly jumps to the Cybertron timeline, where Edge of Reality has liberally borrowed the creatively imagined art assets from earlier games, but somehow made them look worse here than they did in 2012’s Fall of Cybertron. Level design and encounters are still a mess during the bulk of the campaign, including a few misguided attempts at platforming challenges and several points where checkpoints are too infrequent and set before cinematic sequences – never a good idea. Many of the playable robots are retreads of characters already fleshed out in the previous game, like Jetfire, Optimus Prime, or Soundwave. It’s a shame that we don’t get more new faces drawn from the vast selection of franchise characters. The boss encounters would have been another way to introduce more memorable named heroes and villains. Instead, on more than one occasion during boss fights, the opposing foe froze halfway through the fight and stood immobile as I gunned him down. Ironhide should not be such a chump.

Most of the game sees a fellow Autobot or Decepticon running at your side, leading to the reasonable assumption that cooperative play was once planned like in the original War for Cybertron, but that this time the idea was scrapped. Even so, your cooperative A.I.-driven allies are at least as stupid as your worst game-playing friend, regularly charging headlong into a fight, and sometimes getting killed in inconvenient locations so you’re forced to wade in and revive them.

Audio is the expected mix of explosions and thumping action music barely audible behind the sound effects. Unfortunately, miscues on character dialogues abound, typified by enemy death screams that trigger over a second after the poor automaton has already exploded. In the final level, a single angry cry of “Let’s see what we got!” came from the speakers every 30 seconds for a full hour.

Rise of the Dark Spark includes the beginnings of a smart leveling and challenge system that unites the single-player campaign and multiplayer cooperative experience. XP is earned over time, and completing distinct challenges provides gear boxes that can be opened for blind rewards, ranging from new multiplayer characters to weapon upgrades. It’s initially rewarding to receive these unlocks, but the system gets tiresome. Every box provides too many items, and they must each be viewed individually. Unlock five gear boxes, and you could spend several minutes just button-mashing your way through the new acquisitions. Moreover, once you complete the campaign and play just a few multiplayer matches, you’re likely to have unlocked most of the content, including more one-use items than you know what to do with, so the drive for investment fades away.

The return of the popular wave-based Escalation mode manages better than the single-player offering. The four-player cooperative action can be a good time, whether playing with friends of hopping into match-made games. The broad selection of playable characters is entertaining for fans, including favorites like the Dinobots and Insecticons. The weapons are almost all fun to use, including everything from an electrical bola gun to a corrupting weapon that turns enemies into allies.  Nearly all of these armaments are lifted wholesale from High Moon’s previous game. New upgradeable defense installations fill every one of the eight varied Escalation maps; laying out turrets, healing stations, and decoy holograms to bolster your team’s defense is rewarding.

Escalation is not without its problems. The visual and technical issues carry over into multiplayer. Awful enemy spawn placement sometimes sees the bad guys literally charging into a hail of gunfire. Enemies drop too little ammo, which is not a fun thing to contemplate amid the endless waves of bad guys. The lack of difficulty modes means that the excitement wears off after you master the 15 waves of a normal match.

Even with a passable cooperative experience, Rise of the Dark Spark feels rushed and haphazard in execution. Making and releasing a game is incredibly hard work, and I know nothing about the behind-the-scenes decisions that led to such a poor follow-up to a solid series. Ultimately, it’s hard as a fan to feel anything beyond disappointment. If Activision cares to know, fans are indeed hungry for a new Transformers game – just not one that shamelessly tries to make us trade our hard-earned cash for junk.

This review pertains to the console and PC versions of Transformers: Rise of the Dark Spark, except for the Wii U version, which is reviewed here. The identically named 3DS title is a separate game developed by WayForward. 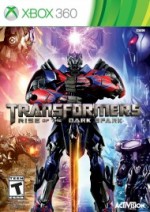 Transformers: Rise of the Dark Spark

Rise of the Dark Spark squanders the good will established by earlier games.

Purchase More Info
5
i
Game Informer's Review System
Concept Shatter the positive progress of the franchise established through the earlier Cybertron games by merging with the movie continuity and releasing an incomplete game
Graphics Muddy textures, jittery animation, overly-reflective metal – the visuals are outdated and appear hurried
Sound The gravitas of Peter Cullen’s voice acting can only carry you so far. The endlessly looping music and voice cues push far past that point
Playability Shooting and movement controls are functional, and transforming between vehicles and robots can still be fun
Entertainment A shameless cash-in attempt is only redeemed by passable cooperative multipayer
Replay Low