High Moon Studios proved that video game greatness was possible with a decades-old cartoon license. Developer Now Production offers a less inspiring vision for Transformers with a Wii U game based off the excellent CG cartoon. The result is a faithful representation of the show that suffers from unremarkable gameplay.

Most of your time in Transformers: Prime’s campaign is spent beating down Decepticons until an invisible wall drops. You play Optimus Prime, Bumblebee, and few other Autobots throughout the story, but they all play the same, save for speed. The shallow combat consists of mixing light and heavy attacks, with an occasional defense-shattering attack. You can pepper your foes with long-ranger blaster attacks using the lock-on system, but the inability to lead shots results in too many annoying misses. Despite a lack of imagination, barreling towards your foe as a semi truck and morphing into a giant robot to deliver a mid-air punch is always fun.

A few driving segments have been tossed in for variety. You’re forced to steer your vehicular form with the GamePad’s motion controls during these parts. Motion steering isn’t enthralling, but at least it isn’t broken. These driving segments are the only moments that utilize the new controller in interesting ways. You can also use the Pro Controller or remote-and-nunchuck combo, though the latter is so awkward that you’re better off skipping it altogether.

Fuzzy textures and boring level design doesn’t do the mediocre gameplay any favors. On the other hand, character models and the transformation animations look great. A bare bones multiplayer mode lets you and another friend battle one-on-one or against bots. Deathmatch is the only mode worth a glance. Decepticons and other unlockable Autobots are playable in multiplayer, but the flying Transformers handle like misassembled kites.

I consider myself a Transformers fan, but no amount of appreciation for the series makes me comfortable recommending Transformers: Prime. The benign gameplay may be a good option for fans too young for the gritty action of High Moon’s excellent series, but that’s about it. 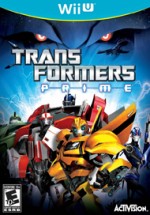 Unlike High Moon Studio's stellar Transformer titles, Prime is a bland tribute to a terrific cartoon.

Purchase More Info
6.5
i
Game Informer's Review System
Concept A simple, underwhelming game set in the universe of the Transformers Prime cartoon
Graphics Character models and transformations look good. The environments and particle effects are dry and boring
Sound Peter Cullen voices Optimus Prime, and that’s all that really matters in the audio department
Playability The combat is serviceable but boring. Using the GamePad to steer during driving sections isn’t as awful as you might think
Entertainment Die hard fans of the TV show may find something to enjoy here, but the whole thing feels like a by-the-numbers licensed game
Replay Moderately Low