If licensed titles are in one of gaming’s lower circles of hell, at least the condemned can peer down and laugh at the majority of games designed for children. Kids’ games are often poorly designed, shoddily built, and rushed to market before they’re ready. They’re also cheap to develop and dependable sellers, so publishers don’t have much incentive to reevaluate the status quo. Why mess with a successful formula?

Fortunately, Disney Interactive and Avalanche Software have strayed away from the genre’s quick and dirty inclinations with Toy Story 3 after realizing that such an approach serves no one particularly well. It’s bad for the audience, and can only diminish a license as cherished as Pixar’s Toy Story.

The bulk of Toy Story 3 is divided into two modes. The first is standard fare for licensed games, taking key scenes from the movie and transforming them into levels. A Toy Story 2-inspired section starts with Buzz Lightyear showing off his rail-shooting prowess and platform-hopping capabilities before letting him flex his brain with some rudimentary puzzles. One of the later sections in the game requires quick switching between Buzz, Woody, and Jessie as they tap their unique abilities to advance through a garbage dump and rescue their friends from a trash compactor’s gnashing metal teeth.

Exploring the levels and playing through the story is enjoyable enough, but the game really takes off with a second player on board. Reiner and I played through the game cooperatively, though at times we stretched the definition of the term. The game is designed so that skilled players can carry their partners through the experience, similar to how Traveller’s Tales approaches co-op in its LEGO games. Players can also literally carry their partners, opening the door to some hilarious moments of sabotage. It’s not unlike New Super Mario Bros. Wii, where players can knock their friends into hazards or pick up their buddies and chuck them directly into pits.

Playing through the movie’s story is fun, but it’s not nearly the most interesting thing in Toy Story 3. The second mode, the toy box, lets you hop into a Woody’s Roundup-themed zone and mess around in an open world. At first, there’s not a whole lot to do but smash barrels and pick up item-filled capsules. After getting a few missions from Hamm, Slinky, Stinky Pete, and a few others, the world opens up. You can buy new buildings and playsets from Al’s Toy Barn, some of which allow access to new areas and unique missions. After pouring a few hours into the town, I had developed a bustling little community filled with customizable people, buildings, and plenty of tasks on my to-do list. One moment I was capturing escaped bandits and tossing them back into the jail. The next, I was tossing plastic paratroopers into the air and guiding them onto their targets.

As with the story missions, the entirety of toy box can be experienced with a friend in tow. Better still, players can act independently. Every once in a while I’d glance over at Reiner’s half of the screen and see him painting a building for a mission or tossing renegade cows in a pen. Activities like races require the two players to join up, but you can play through the majority of the mode doing your own thing should you desire.

Toy Story 3 ultimately succeeds in the same way that Pixar’s films do – it’s attractive to young people who get a great surface experience and for older audiences who appreciate extra layers of depth. It also poses a challenge to those who are satisfied with churning out half-baked licensed games: You can do better, and the results of that effort are worth it.

8
About Game Informer's review system
Concept
Tell the story of the Pixar film while letting players explore the Toy Story universe in a separate, ambitious sandbox mode
Graphics
Buzz, Woody, and company look great and are faithfully animated
Sound
The score is peppy and fun, but if you aren’t already tired of “You’ve Got a Friend in Me,” you’ll want to shove Tinkertoys in your ears before the end credits
Playability
The platforming segments control nicely, and the toy box interface is simple and effective
Entertainment
It won’t convert the hardest of the hardcore, but players who are looking for a solid family game should look no further
Replay
Moderate 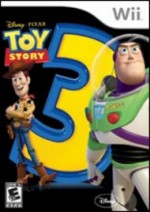