Fewer and fewer titles in modern gaming are entertaining within minutes of picking them up. Most are filled with slowly paced tutorial sections or long cutscenes, so it takes a while to get to the good stuff. Towerfall wastes no time at all. By the end of my first multiplayer match, the group I played with was screaming, laughing, and immediately falling in love with the Ouya exclusive.

Four-player competitive gameplay brings memories of Smash Bros. to mind first and foremost, but its one-hit kills and constant intensity also conjure up moments from classic Bomberman. By default, characters begin with three arrows in their quiver; one wrong move can mean instant death, and one well-placed shot can end a match.

Towerfall involves a decent amount of strategy – it isn’t just about jumping around and flinging arrows at each other. Treasure chests grant abilities like wings, invisibility, or a shield, and arrow types that explode, grow brambles, or bounce off walls can be acquired.

Tons of enjoyment can be found out of the basic options, but a large list of variants helps if you want to tweak things around a bit. Handicaps can be turned off, corpses can be set to explode, players can start with one arrow instead of three, and big heads allow for larger targets.

With this suite of variants and dozens of versus maps, Towerfall offers plenty to keep the action fresh. Though it features a variety of single-player trials that task you with destroying dummies in a set amount of time, multiplayer action is the clear focus of this Ouya launch title. It’s one of the most riotous multiplayer games I’ve seen in a long time, and it should be considered a required purchase for any Ouya owner. 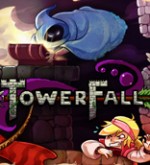 Towerfall is one of the most riotous multiplayer games I’ve seen in a long time, and it should be considered a required purchase for any Ouya owner.

Purchase More Info
9
i
Game Informer's Review System
Concept Fill your friends with arrows in fast-paced multiplayer action
Graphics A sprite-based art style fits the simple gameplay well
Sound Nothing to write home about, but nothing distractingly awful
Playability The Ouya controller can be rough, but playing with a DualShock is great
Entertainment It's immediate, undeniable fun
Replay High