This grand strategy title’s scope is a historic achievement, asking players to lead ancient Rome or another of the era’s powerful factions to hegemony through military force, diplomatic alliances, and the almighty power of money. For the sheer size that Rome II boasts, managing any empire larger than a medium-sized European country is a Herculean task. The spectacle of Roman legions clashing with barbarian hordes in real-time tactical battles is a sight to behold, but unchanging tactics and the occasional dramatic AI or pathfinding bug keep the combat layer from achieving its potential. As strong as Rome II’s bid for strategy greatness is, its lack of focus and tendency toward monotony stain its gleaming banners.

Total War’s core mission remains the same in Rome II: Conquer your way across a huge map one turn at a time, growing your economy and keeping public unrest low so your people don’t rebel against your rule. When armies clash on the map, the action zooms into a real-time tactical simulation that puts the combatants in a geographically appropriate setting. Both sides of the game are impressive in scale and presentation.

Rome II sprawls from England to Egypt. Greek city-states war constantly with one another over the ruins of Alexander’s empire, Celtic and Iberian tribesmen squabble over the western marches, and nomadic tribesmen build their own kingdoms in the windswept reaches of northern Africa. Each culture of the era is empowered with its own tech trees, military units, and buildings, giving every group a distinct flavor on and off the battlefield. Howling Hunnic hordes descend upon mobile Celtic skirmishers, while Roman legions clash with armored Greeks in deadly melees. This diversity is Rome II’s greatest strength; every faction is unique not only because of its starting position but thanks to how it develops, builds, and fights differently.

The map is constructed differently in Rome II than in previous titles. Each province has one walled capital and one to three non-fortified settlements that can be captured independently. This has the dual bonus of simplifying empire management and decreasing the proportion of battles fought across city walls. Unifying unrest and economic development at the province level dramatically reduces the number of individual decisions you need to make, while allowing the map to retain its epic scale. Despite the enormous land area, Creative Assembly has done an excellent job creating chokepoints and other terrain configurations that encourage interesting maneuvering on the strategic map as well.

Making armies only exist under the leadership of a general and sharply limiting your number of leaders sound like problematic changes for Total War on paper. In practice, the combination of easier mustering (all troop buildings are active across the entire province they’re in, so no more going all the way back to your capital for reinforcements) and much larger garrison forces results in more huge, awesome battles and fewer tiny armies being shuffled around the map. The overall effect is a big win on every level.

Unfortunately, the metagame that propelled Total War: Shogun 2 to such great heights is severely dumbed down in Rome II. Diplomacy is a minor concern at best, thanks to trade income being much less important and the constant need to expand. Given the way the AI approaches inter-faction dialogue, few options aside from “open warfare” and “brief armistice” exist. The typical strategy loop is to pick your weakest neighbor (or three, depending on how big your empire already is), conquer them, put down rebellions, and repeat. No sense of navigating tricky webs of alliances or isolating a powerful foe from their friends is present. Worse, the internal intrigue among fractious Roman families is a thin and unsatisfying layer that requires almost no attention.

Where Shogun 2 accelerated into the massive endgame war just as administrating your empire started to become tedious, Rome II slows down far in advance of a campaign’s finale. The persisting legacy UI stupidities of Total War make every turn an exercise in flying back and forth across the map to make sure that you’re not forgetting to move any armies, fleets, or agents – a far less entertaining activity than actively planning your conquests that takes up a much greater slice of your time. Province development is a slog through picking which of three agricultural buildings is most efficient and choosing between the eight tiny bonuses that different temples offer. The good parts are still great – climactic sieges, desperate forest ambushes, finally getting the new units you’ve been building toward onto the field – but the boring parts are far too prevalent.

Battle is the same as it’s ever been in Total War. When it works properly it’s great fun, and the presentation is second to none. Naval combat is still an unmitigated disaster that manages the impressive feat of being worse than it was in the last two games thanks to its absurd over-reliance on boarding and horrific unit pathfinding. Amphibious assaults would be a cool addition if landing transports didn’t end up in units bugging out during the process on a regular basis. Sieges are better thanks to improved maps and multiple capture points, but the AI still often fails to understand basic ideas like defending ladder assaults with melee troops on the walls. The cultural differences in units is wonderful, but the combination of legacy problems with the terrible naval implementation feels like a sidestep rather than a move forward for the series. Tactical multiplayer is a step back from Shogun 2’s system, with none of the persistent fluff around leveling your avatar. However, I continue to find Total War multiplayer battles less than engaging thanks to the poor UI and the fact that a single poor decision or mis-click still decides many combats. Multiplayer campaign support works fine in my experience, and it’s a great boon if you have a buddy to play with, but slowing down the already glacial pace of the mid- to late-game is rough.

Rome II does many things exceptionally well. The bright spots, like epic sieges and come-from-behind victories where each of your men are worth four of the enemy’s, are some of the finest moments in the entire strategy genre. Climbing the walls of Carthage after a long and bloody war is a great feeling. Subduing the Gallic hordes in a series of epic open-field battles that litter western Europe with corpses in the thousands when every legionary in your army has dozens of kills to his name by the end of the war is what this kind of war gaming is all about. Even so, the game is a disappointment coming off of the brilliance of Shogun 2. The age-old problems that have plagued Total War since its inception, which were mitigated with such great skill in the last game, return with a vengeance. As much fun as the battles often are, I never feel like I’m masterminding the rise of an empire against all odds – and that lack keeps any grand strategy game from realizing its full potential.

8
About Game Informer's review system
Concept
Form the Roman Empire with blood and blade, or rewrite history by uniting the ancient world under a different banner
Graphics
Total War has always boasted top-shelf presentation, and Rome II is the best yet – but your gaming rig had better be up to date
Sound
Unremarkable audio throughout the campaign map gives way to blood-pumping clashes and cries in tactical combat
Playability
The streamlined strategy layer is wonderful, but still can’t keep the mid- to late-game doldrums at bay
Entertainment
The sprawling map loses as much with its lack of focus as it gains in sheer scale and ambition. For all of Rome II’s improvements, Total War: Shogun 2 remains the series’ high point
Replay
Moderately High 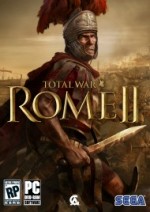