If you've ever played the original item accumulation game, Katamari Damacy, then Tornado Outbreak feels all too familiar. Instead of a magnetic ball, you play a tornado named Zephyr chosen to save the world by destroying everything in its path.

Each of Tornado Outbreak's levels, which take place everywhere from trailer parks to a Vegas clone, requires multiple passes to continue. Players must harness the power of the tornado to uncover the hiding places of Fire Fliers, fire-based creatures that have stolen the orbs of anti-matter hero Omegaton that need to be returned. In two passes across the environment, Zephyr must uncover 50 of 100 fliers housed within each level. You start as a small tornado that at first can only destroy plants and tumbleweeds, but can eventually take down entire amusement parks. Tearing through structures and leaving nothing but dust in your wake is quite enjoyable.

As part of the challenge, Zephyr must stay away from harmful solar rays. To aid the Wind Warrior, an object called a L.O.A.D. Starr casts a shadow for a limited time. It is imperative to collect the fliers and return to the shadow caster before time runs out, but without any sort of mini map, it can be difficult to find the location of the Starr in the level before time is up. Fail and you must restart the level.

Once players collect the Fire Fliers, they enter the totem battles. After racing through vortex gates to gain size and speed for the upcoming encounter, you must cross the battlefield while staying in shade spots to approach the totems and take them down with rapid button presses. Each level follows the exact same progression path, and this dull repetition ultimately makes what could have been a great tornado game nothing more than a funnel cloud. 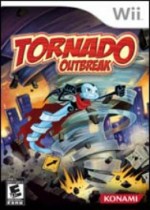 If you've ever played the original item accumulation game,
Katamari Damacy, then Tornado Outbreak feels all too familiar. Instead
of a magnetic ball, you play a tornado named Zephyr chosen to save the
world by destroying everything in its path.

Purchase More Info
6.75
i
Game Informer's Review System
Concept Build a young tornado's strength by collecting smaller items to rip through environments and help save the world
Graphics The cutesy graphics and cartoon-like cutscenes are average at best
Sound The booming sound of powerful wind gusts destroying level structures is satisfying
Playability If you've played Katamari Damacy, this will seem very familiar
Entertainment This short game can be finished in one sitting, but there isn't enough gameplay variety to maintain interest
Replay Low