Calling a game “solid” can sometimes be taken as faint praise, but I can’t think of a better word to describe 2K’s Top Spin 4. The long-running series has always specialized in a more serious-minded approach to the game than Sega’s Virtua Tennis (you won’t be dodging giant falling fruit). Its career mode delivers a comprehensive experience that emulates the trials and tribulations of being a real pro.

Top Spin 3 tried to expand the palette of control mechanics beyond the traditional face button inputs that have remained essentially unchanged for years. This was done through “risk” shots – which required you to time your shots with shoulder button inputs that controlled a moving vertical meter. I know that sounds complicated, and it was; I never felt at ease with it. However admirable the attempt was, the game at times felt unduly difficult.

This time around, Top Spin is focused on a more streamlined approach. The basic shots (flat, slice, lob, and top spin) are assigned to the four buttons. However, the duration and timing of your presses can make your shot either a control or a more risky power shot. It’s nothing you haven’t seen before, but it feels right, and that’s everything in tennis. The analog functions are scaled back, but you still have the option to use an analog serve. I quickly mastered this and found it more effective than the standard serve. Other than a few shoulder modifiers for charging the net and drop shots (which I never learned to my satisfaction), the controls are streamlined and tight.
It’s easy to come in and have success, especially in the early part of your career – maybe too easy. In my first Masters level tournament, I came up against Nadal in the quarterfinals. I expected to be dispatched quickly by the world’s top player, but surprised myself by winning. However, after I beat Federer in the semis, I knew something was up. Most of his serves were around 75 mph, and he even double faulted in a crucial point during the tiebreaker. While these AI adjustments were likely done to allow you to see more top-rank players early in your career, it diminishes the impact of meeting those icons for the first time. When I hit level 18 (the level cap is 20), Nadal became as fearsome as I expected. He tirelessly ran down nearly everything on the baseline and made me pay for my sloppy net play with ruthless passing shots.

Because it lacks the management options and coherent league structure of team sports like football and baseball, tennis struggles with career modes. Though there’s only so much you can do to make a tennis career mode compelling, Top Spin 4 does it better than any game to date. After using the deep player create mode (I always seem to come up with the ugliest players possible), you’ll begin to climb the ranks, eventually earning superstar status. The career mode works off a calendar system. Each month you can compete in one training exhibition or special event and one tournament – which you can choose a mix of fictional venues and real world locations like the French Open at Roland Garros (Wimbledon is conspicuously missing). The events range from simple practice matches to promotional events like dance club appearances and motion-capture sessions. Each event earns you XP, new fans, or both. It’s important to choose wisely because rising in the rankings requires hitting certain numbers of fans and XP. You can also improve your stats by hiring coaches; each one comes with certain passive stat bonuses and in-game challenges (like hit 50 slice shots) that lead to more stat bumps once accomplished. XP can be assigned in different areas based on three playstyles: offensive baseline, defensive baseline, and serve and volley. I ended up focusing on serve and volley, which is more effective in Top Spin 4 than in current pro tennis. With so much to do, I appreciated the way that the game explains each new feature as it appears; everything is clearly laid out in easy to understand terms.

The depth of the career mode carries over to the online mode, most notably in the World Tour mode where you take your created player online to compete for the number one world ranking. Each week is a “season,” with one player earning the top spot. Players continue to earn XP in all online (and offline) modes for their created players, which nicely ties things together and ensures that everything you do in the game provides a sense of accomplishment. While I played this game pre-release, the test matches I played against 2K staff were silky smooth. Lag only popped up in two instances, neither of which changed the outcome of the point.

While it’s not a revolution in video game tennis, Top Spin 4 provides both a mastery of the basics and the most comprehensive career mode to date. Throw in a strong roster of real-life professionals, a great online component, and Move functionality for the PS3, and this title is more than ready for center court.

Postscript: PlayStation Move
The PlayStation 3 version of Top Spin 4 includes both PlayStation Move functionality and stereoscopic 3D. The Move controls work as you’d expect: after synching the wand, your on-court movements are controlled by the analog stick and your racket is controlled by swinging. It works fairly well but failed to convince me that the Move is preferable to playing with a conventional controller. Swing detection was a problem, especially with forehands. Overall, it’s a nice gimmick, but not a meaningful addition to the game. I was not able to test the 3D functions. 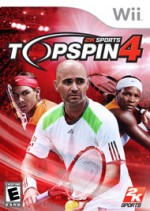 Purchase More Info
8.5
i
Game Informer's Review System
Concept Simplify Top Spin 3’s convoluted controls while adding depth to career mode and online
Graphics The pros look lifelike, and the animations are very fluid. The arenas and crowds are much more detailed, which is highlighted by the new TV-style presentation
Sound The crowd noise ebbs and flows with the match. Still lacking commentary, and I hope you like the song “North American Scum” by LCD Soundsystem. You’ll be hearing it a lot
Playability The streamlined gameplay is centered on correctly timing button presses, allowing you to focus on on-court strategy instead of mechanics. Still, it will take you a while to master the game
Entertainment From the gameplay to the career mode, Top Spin 4 does tennis right
Replay High