Imagine What Could Have Been
by Andrew Reiner on Sep 22, 2009 at 01:56 PM
Publisher: Microsoft Game Studios
Developer: Silicon Knights
Release: August 19, 2008
Rating: Teen
Reviewed on: Xbox 360 My chronology of world history might be off the mark, but I believe Too Human's conception predates the Boston Tea Party. More of an ancient relic than a new release, this game entered development nearly a decade ago, and was originally slated to be a PlayStation One title. Sliding from one console generation to the next, time turned this lost game into a pixelated Sasquatch – some people claimed to have seen it, gushing that it innovates in ways that gamers have never seen, while others heard it was going to be the largest game ever made, requiring no fewer than four discs to contain its weighty content. After all these years and stories, this mythical game is finally upon us. Like most exposed legends, the truth behind it is a monumental letdown.

Unless you find yourself waking up in the middle of the night in a cold sweat craving a Diablo-like loot fest, you'll likely never want to hear anything about Too Human again. It's not a terrible game, but even huge fans of looting will think twice about calling it average. If your fondest gaming memories consist of reworking skill trees, and enhancing weapons and armor with effects, you'll be pleased to hear that the best parts of this game are all found within the menus. You can customize everything. There are tons of weapons and armor to find and purchase, and a dizzying amount of effects you can apply to them. You can even apply a rune that changes the color of your gear so it all matches.

When you peel away the extensive customization and...well...menus, Too Human runs into a world of trouble. The main offender is the combat. I like the idea behind the analog-based system, and I did occasionally catch glimpses of why it could be brilliant. But I mostly found it an uncooperative mess that doesn't give the precision needed for specific combat situations. By tapping the right analog in different directions, you can bounce between enemy troops all day long. But what happens when you throw an enemy that explodes on contact into the mix? The logical choice is to abandon melee and use long-range firearms. This would work if you could actually target the desired enemy. All you can do is point in the general direction and hope the targeting system highlights your enemy. If it doesn't pick up your target, enjoy dying and watching the lengthy regeneration sequence. Standard battles are bothersome for all the wrong reasons, and the boss fights are so poorly designed or overcharged with hit points that they seem like parodies of real boss battles.

Too Human is an unbalanced mess. Of the five selectable classes, only the Bio Engineer can heal himself. The other classes must rely on the dumb luck of a downed enemy dropping a use-on-contact health boost. Player death for the other four classes is routine. While playing through the single-player campaign, the game seems to be designed exclusively with cooperative play in mind – with one person playing the healer and the other a tank. Co-op is definitely the way to play this game. However, you will be doing so at the expense of the story. None of the cutscenes from the single-player game are integrated into the co-op mix.

This may sound like a bad thing, but it's actually a blessing in disguise. This tale, which throws Norse mythology and science fiction into a malfunctioning blender, is a sizeable train wreck that doesn't stop. It just keeps getting worse as it goes, unintentionally turning hallowed characters Thor and Loki into stooges that you can't help but point at and openly mock. On one hand, you want the game to provide more narrative to tie things together. On the other hand, you want less, because it's hard to endure as is.

In the end, Too Human is all about players sculpting their ideal killing machines. If you enjoy leveling and looting, it's well worth a look. If you only have a moderate interest, Too Human's aggravating gameplay and irreparable plot won't deliver many thrills. Maybe another nine years of development time would have helped. 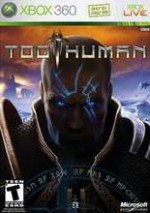 Too Human
Purchase More Info
6.75
i
Game Informer's Review System
Concept An action/RPG that tosses tons of loot at players, but little in terms of solid gameplay
Graphics The effects are vibrant, and the character models look fantastic. The environments are drab, however, and the animation is stiff in both combat and cutscenes
Sound Outside of hearing yourself say, ''Why won't he target him?!,'' the pounding orchestrated score roots you on and the voicework isn't half bad
Playability The analog controls work?sometimes. Balancing and targeting issues run rampant throughout the game
Entertainment You can dive head first into the customization, but when you try to dive into the gameplay, you run into a wall made of frustration and odd design decisions
Replay Moderately High