Tiny Metal’s simplified strategy and delightful tone scratch an itch that has been festering since Nintendo’s Advance Wars series reached a ceasefire in 2008.  Battalions of adorable tanks and warplanes engage in a series of turn-based encounters that seem like the opening salvos of an epic tactical war. Unfortunately, Tiny Metal’s action fails to evolve past the basics; its shallow strategy offers some cheap thrills, but its lack of depth is boring for battle-hardened tacticians.

Tiny Metal’s action starts off slow as you are introduced to your various units and the classic rock-paper-scissors gameplay that gives some classes an advantage over others. For example, tanks are strong against basic infantry while rocket launcher-wielding lancers will rip through those armored vehicles. Each unit’s strength is tied to its health, which creates a nice balance to the flow of battle. It also means if you can’t destroy an enemy in a single turn, you might, at least, be able to neuter its next attack. Fortunately, even weak units can still be useful in combat, because you can have them team up with other troops to attack a single foe. I found this especially helpful when taking down many of the heartier tanks and warplanes.

Tiny Metal’s tactics are easy to learn, and I never felt forced to adopt a specific strategy to progress. At the same time, I never felt like my back was up against a wall. Tiny Metal’s campaign is a breeze, largely because the enemy A.I. has all the tactical prowess of a puppy chasing down its dinner bowl. The enemy’s army rolls towards your base in evenly paced waves. However, you generate resources at a steady clip, so building a larger army and overwhelming your opponent is easy. Tiny Metal’s lack of depth compounds this problem. Since all your units only have one basic attack, you don’t make complex strategic plays – you simply match the units on your team that are strong against the units on your opponent’s team.

Despite Tiny Metal's adorable exterior, it tells a serious story about an army Lieutenant named Nathan Gries who is embroiled in a war between two fictional nations. When a famous war hero goes missing, Nathan’s battalion goes in search of him only to discover a larger threat headed for the borders of their nation. This boilerplate war story adds very little to the experience, and the main villain’s ambitions remain vague, even at the end. Area 35 expends a great deal of energy on this lackluster narrative, and each campaign mission is bookended by several minutes of characters explaining their backstory, which ultimately bogs down the flow of the action and killed some of my enthusiasm rolling off a successful mission.

Tiny Metal’s visual style pays homage to Intelligent Systems’ dormant Advance Wars series, but its under-baked action isn’t as cute. The battles never feel like a chore and I enjoyed basking in my easy victories, but Tiny Metal needs a few more tools in its arsenal if it wants to take on the legacy of Advance Wars. 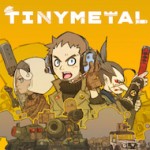 Tiny Metal’s shallow strategy offers some cheap thrills, but
its lack of depth is boring for battle-hardened tacticians.

Purchase More Info
7.25
i
Game Informer's Review System
Concept A simple, turn-based strategy game where the tanks are so adorable you almost don’t want to shoot them
Graphics The anime-inspired art style is one of the best aspects of the game. I loved seeing the designs for new characters as I unlocked them
Sound The soundtrack is lighthearted, and it matches the adorable visuals. Characters speak Japanese during story sequences, which is a little jarring since the dialogue during a mission is in English
Playability Tiny Metal’s action is simple, but plays better with a controller. I noticed a few hiccups when trying to navigate the menus
Entertainment This charming strategy game offers some cheap thrills, but the battles grow old quickly thanks to a lack of depth
Replay Moderate