I’m glad this year’s Tiger game is moving away from the golfer himself, and not because of his image. Last year’s Tiger Legacy mode faltered, so in its place Tiger 14 offers the Legends of the Majors mode that lets you play through the history of the sport itself instead of just Tiger’s career. It’s an effective approach, especially when coupled with a few small changes that tighten the overall experience.

I’m not a golf history buff, but Legends of the Majors mode is a fun way to earn coins that incorporates your Career mode golfer by having them face off against the sport’s greats at certain intervals. The mode also uses era-specific equipment, which isn’t as interesting.

This year the all-important coins, which are used to buy stat-boosting pins, are more useful since you can spend them to level up your golfer. Levels grant you attribute points and equipment for a lot less than it takes to buy a pin pack.

The expansion of the online options gives you more ways to earn coins. The Country Clubs format lets you take in more players, who can contribute to the club’s status in more ways (including a variety of tourneys and leaderboards). The clubs also feature expanded voice chat, and a new Club Loyalty Bonus that gives you coins for members playing every day.

The action on the course remains largely the same from last year, except for the new swing arcs. Like changing your club tuning, fiddling with your swing arc has its advantages. This lets you change the flight characteristics of your ball, including your power, control, and how the wind affects your shot.﻿

Even though Tiger 14 has a similar setup as Tiger 13, I had more fun with the newer game because its constituent parts mesh better. For a golfer, getting everything in synch is important.

The  Edge
Like last year, if you absolutely have to have motion controls, I suggest you go with the Move. Putting in particular is harder with the Move, but it's also more accurate in general over Xbox 360's Kinect. The Kinect motion controls are dumbed down to the point where the game does a lot of the work for you. For instance, a half swing on the Kinect will often be read as a full-powered shot. This defeats the purpose of using motion controls for a more lifelike feel.
8.5
About Game Informer's review system
Concept
Change out Tiger’s history lesson for an overview of golf itself, and add more online features
Graphics
The clouds and changes of day (including night golfing) look great
Sound
Jim Nantz’s intros for the historic Legends of the Majors challenges are cool to hear
Playability
Changing your swing characteristics is handy even if the physical swing itself doesn’t change
Entertainment
Doesn’t dramatically change from last year, but it’s definitely more fun
Replay
High 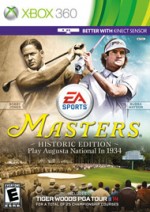