Tiger Woods 12 brought a comforting structure to the career mode, but I find this year’s new features and overall organization a byzantine maze that serves to bring you right back to where you started. The Masters career structure thankfully returns, but the larger focus is on collecting coins. You earn coins no matter which game mode you play – whether that’s the online country clubs, in career mode, or the new Tiger Legacy mode that traces his past and possible future. But like other new features in Tiger 13, the initial deliciousness of this carrot does not last.

The importance of coins in the game shapes its entire structure (including the fact that your console needs to be connected online to get them). Although you can approach coin collecting passively, the way they are so tightly embedded in the game shapes how you spend your time playing it. Coins are spent on pins you get from packs in the store. Pins give your golfer boosts in a variety of ways, and have replaced some, but not all, of the bonuses you used to get from clothing and equipment. I wouldn’t say that pins are absolutely necessary (the XP-based attribute system still exists as well), but they impart some sweet bonuses, so you’d be missing out if you didn’t participate.

If you don’t think you’re earning coins fast enough or don’t want to buy them outright, you can also explore the new Tiger Legacy mode where you play through different phases of the golfer’s life. Given that it starts out with him as a toddler, you’d think it would be a tutorial of sorts, but it doesn’t even work effectively as that. Instead, this waste of sepia is a repetitive slog of challenges that only serves as an avenue to earn more coins. Having to go through this kind of circuitous route to build your coin bank is not time well spent.

Tiger 13’s other big new feature – its host of re-jiggered swing mechanics – gives players more options to finesse their shots, but I wouldn’t call it a re-invention. I like how you can play around with different variables like swing velocity and ball positioning to suit your swing style. For instance, in order for me to swing straight and true, I can’t have too much overswing on my backswing nor follow through too fast. This changed the way I tackled courses, from my club selection to changing where I struck the ball.

But the more I played Tiger 13, the more it felt the same. It doesn’t take long to master the new swing mechanics and find yourself – no pun intended – back in the swing of things. While I don’t think that the development team made changes just for the sake of change, I didn’t play the game differently. I simply adapted to the new mechanics to bring me back to how I used to play it.

My ambivalence towards the coin system and some of the elements of the new swing mechanics shouldn’t obscure the fact that Tiger 13’s online package has some good features. Although you can’t create large club vs. club tourneys or events, I like the co-op aspect where club members work towards shared goals. The designation of a weekly club leader (which funnels into a tourney structure) and smaller daily carrots like a coin reward for playing four days in a row are also welcome additions. Coins are a key component of Tiger 13’s online country clubs, as well. Joining one gives you modifiers to earn more coins, which gets you pin packs much faster than if you were to earn them by yourself.

Golfers travel the world looking for fame and fortune, and Tiger 13 does the same thing with its various modes and new features. Unfortunately, some of it feels more like a run around than exciting content.

This is EA Sports’ first use of Kinect, and it shows. The peripheral doesn’t come close to replicating your backswing with fidelity, and it lacks fluidity and accuracy. The PS3 Move functionality fares only slightly better, but the hiccups in the backswing animation are annoying when you’re trying to gauge how much power to use during putting. I don’t recommend either of these peripherals over the normal control setup.

Tiger's Legacy Mode is prominent but not fun Coins and pins are central in the game 8
About Game Informer's review system
Concept
The game offers a new swing mechanic, the Tiger Legacy mode, and more, but for better or worse it’s largely the same
Graphics
The good looking greens use a similar 3D grass and field of vision focus as last year’s NCAA game
Sound
As always, Jim Nantz delivers on the golf commentator vibe, but I wish he delivered more context specific to your character
Playability
Visually, the new swing mechanic takes getting used to. Regardless, there are times you can’t see it because it blends into the background environment
Entertainment
There are some new hoops to jump through, but I think only some of the online country clubs features are actually exciting
Replay
Moderately High 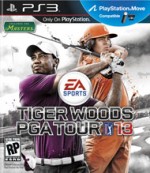