Even normal people can play on pro golf courses (assuming, of course, they let us in. But, that is another matter). We may not shoot under par on the course like the pros, but in some ways it’s the same experience. The bunkers are still made of sand, and the trees seem to squeeze the fairways to narrow strips. By adopting many of the new features of the other versions of Tiger 12, this year’s Tiger on the Wii is doing the smart thing by putting Wii gamers on the pro tour and not handcuffing them. Be that as it may, it also comes up just short of those games.

The new career structure replicates the road from amateur golfer to seasoned pro, with the end result hopefully being repeated trips to the tailor for the storied green Masters’ jacket. In the process, the game’s career portion unifies Tiger challenges and the pro tour in the same mode, and includes equipment sponsorships as well. Still, the game smartly keeps Wii-only features like disc and minigolf, which help give this version its own feel apart from the motion controller.

This game supports the Wii Balance Board, but I suggest you skip it. It records your balance during your swing, but more often than not trying to match up your balance with the indicator reticle just gets in the way of producing a good, natural swing. I also don’t feel that the game always properly rewards you with the correct balance points for good or bad shots.

Even though the Wii version replicates many of the same strokes as the PS3 and 360 versions, it’s not as good. The player skill system is the same as in Tiger 11 on the Wii, and that means it’s not as flexible as the new XP structure found in those other titles. Your XP is simply dumped in a big pool at the end of a round. Moreover, the relationship with the equipment and skill modifiers is lessened by the fact that only your clubs give you bonuses, making every other piece of clothing and equipment purely cosmetic.

I also don’t think the new caddie system is as effective here. While it undoubtedly streamlines the gameplay, gives you some good options to think about, and offers up different strategies, I found it hard to meet the caddie’s suggested shot percentages. It’s not that swinging the Wii Plus Motion controller doesn’t match with what you see on screen. Perhaps it’s because the controller swings a wider arc than the relatively short play of the analog stick by comparison, and therefore it’s harder to get the same precision. I can’t say for sure what it’s down to, but either way I didn’t feel comfortable with it. The same couldn’t be said for putting, though, which feels excellent.

Making structural changes can go a long way for a game. Tiger 12 certainly does this, but there are still a couple hiccups that get in the way. This year’s model is the best on the console, and it’s that way because of what it’s using from the other versions – namely the PGA Tour structure and the Masters. But like a local pro playing on the same greens as Tiger, it can’t keep up the pace shot for shot. 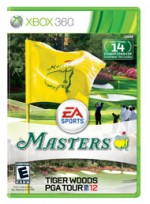 Tiger 12 on the Wii follows some of the changes of its bigger brothers, but it's still a different breed.

Purchase More Info
8.75
i
Game Informer's Review System
Concept This game structures its career mode around the Masters like the other Tigers
Graphics There’s only so much you can do with the Wii. Given that, this game looks about as good as it can
Sound Somewhere there is a very short list of Wii games with great sound. This isn’t on that list
Playability The new caddie system is all about hitting the percentages. Unfortunately, that’s not always easy with the Wii controller
Entertainment It’s great to see the Wii version keep up with the Joneses while still keeping its Wii trappings like minigolf
Replay Moderately High