Golfers are always searching for more consistency in their game. Last year's Tiger wasn't one of my favorites, but for the sake of consistency, developer EA Tiburon sticks with the concepts put in place in 09. I consider Hank Haney and the variable skill system mistakes worth correcting, but EA clearly doesn't, going forward with more modest additions instead. Tiger 10 is a predictable, yet skillful, par putt instead of a thrilling Tiger-at-Augusta moment.

Ironically, Tiger 10's main addition is the incorporation of real-life elements, whether it's Tiger talking about big moments in his career, the U.S. Open, six new courses, or the replication of tour moments (with real pros instead of EA's made-up characters) as integrated in this year's version of Tiger Challenges. I've always appreciated the series' ability to simultaneously strive for realism while at the same time not take itself too seriously. These real-life elements are subtle yet effective at putting you in the PGA without losing some of Tiger's more tongue-in-cheek principles, like getting a stat bump by wearing a bunny suit. This year the game funneled me toward playing PGA tour events quicker than previous Tiger iterations -- another small move towards emphasizing real life.

As effective as these tweaks are, they aren't monumental enough to make you jump out of your golf cart. In fact, one of the more hyped changes is conspicuous by its understated nature. The touted precision putting feature is nothing revolutionary, but merely a new HUD to represent your swing while putting. Likewise, the inclusion of rain is not unwelcome, rather it's simply strange that it hasn't happened before on next-gen systems.

Tiger 10's place in the franchise's history is such that making mountains out of molehills is necessary, because this year's game covers a lot of bases -- except for the long-asked-for create-a-course feature. The online portion is jumpstarted by continuously rolling tournaments that come in daily and weekly flavors. There's even a way you can try and match the pros' scores as they are posted from wherever the tour is that week (no putt preview or spin here). It's no online tour, but it's a step in the right direction; the kind of slow progress we're seeing in the franchise these days.

Wii MotionPlus is a great boon to the Wii version of Tiger -- the game is merely a 7 without it. The peripheral allows for fidelity of swing to the point where controlling draw/fade is easy and accurate, and taking something off your shots for a precise approach shot makes Wii MotionPlus a must for this game. The rest of this Wii version of Tiger is the same (including the online tourneys), although what it lacks in the Gamernet feature it makes up for in an older skill system that I personally prefer to the newer Hank Haney one.

8.5
About Game Informer's review system
Concept
This year's game makes a few updates to the formula, but it's not a big leap forward
Graphics
The new rain effects are welcome, and they're... gray
Sound
Tiger 10 uses the same announcing team as last year, and I don't know that people care
Playability
The new putting mechanic isn't really that new; it's simply an additional display
Entertainment
Incorporating Tiger interviews, the U.S. Open, and more emphasis on real-life golf pros is a nice touch
Replay
High 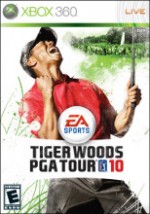