Superheroes comics had been done to death when Stan Lee, Larry Lieber, and Jack Kirby created Marvel’s Thor in 1966, so they tried to do something different. Where other superheroes had received godlike powers after getting dipped in radiation or finding a mystical amulet in their uncle's tackle box, Thor was a god in the fashion of classic myth. The Mighty Thor was never one of Marvel’s most popular comics, but the character was distinctive. Sadly, this spirit of invention was stripped from Marvel’s Mightiest Avenger when he made the transition to video games. Sega’s Thor: God of Thunder feels like it just rolled off the line at a generic action game factory.

God of Thunder begins with an army of Frost Giants laying siege to Asgard. Thor handily repels the invasion, but his companion, the Lady Sif, is killed during the chaos. Thor seeks revenge at Loki's prodding, but unwittingly sets in motion events that will lead to Ragnarok – the death of all gods. The set up sounds promising, but I must have yawned during a few of the pivotal story moments because every cut scene felt painfully stilted and most of the voice actors sounded like they were drinking horse tranquilizer during their recording sessions. While Sega’s story is a kind of movie prequel, it’s completely ignored by the film, so every action you make feels completely superfluous.

The story could be overlooked if the gameplay was at least noteworthy, but Thor’s lumbering combat is ill fitted for a god of thunder. There is no sense of power behind any of Thor’s attacks; every haymaker Thor throws feels too weak-willed to belong to a guy who’s gone toe-to-toe with juggernauts like the Hulk and Superman. There seems to be a major problem with hit detection, because many of your attacks and grabs catch nothing but open air. As the god of storms, Thor has a few lightning and wind-based powers at his disposal that add some variety to the action, but the combat feels very by-the-book and lacks polish.

Sadly, there are elements of the game worse than Thor’s unmemorable combat. Loki himself must be behind this game’s platforming sequences and repetitive trial and error puzzles. It is particularly painful to watch Thor jump from platform to platform since a disagreeable camera often sends him plummeting into an empty abyss. Thor can fly; why is he jumping across lava pits anyway? Other game mechanics, such as save stations and orb collecting, feel as archaic as a Norse myth.

Graphically this game benefits from its association with the movie, as Sega was able to steal some of the movie’s stunning character and environmental designs, but that’s about as much praise I can give this game. Sega’s flavorless texture work spoils what could otherwise have been a visually exciting game. It’s hard to recommend God of Thunder to even the most ardent of Thor fans. If you’re looking for another Thor experience after seeing the film and paging through the character’s 50 years worth of comic history, this game won’t satisfy you. In fact, you’d probably have a more authentic Thor experience if you ran through a renaissance festival with a hammer and a cape yelling “Verily!” 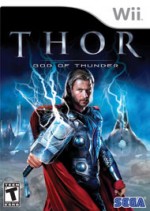 Sega’s Thor: God of Thunder feels like it just rolled off the
line at a generic action game factory.

Purchase More Info
4.5
i
Game Informer's Review System
Concept Duct tape the Thor property to every action game stereotype in existence
Graphics Take the film’s otherworldly character and environmental designs and shave off all the exciting textures
Sound Many of the film’s actors reprise their roles, but it’s clear that their hearts weren’t devoted to the process
Playability Unremarkable combat, frustrating platforming, and tiresome puzzles make Thor an exasperating god to worship
Entertainment Staring at the tiles in a community rec center basement could be more exciting than this
Replay Low