Spiritual successors are abundant in video games, and often developers hope to deliberately evoke nostalgia to remind us of the old days. Thimbleweed Park, a point-and-click adventure game from the co-creators of 1987’s Maniac Mansion, rides on that sensation, but has enough of a modern touch to feel fresh. Thimbleweed Park knows the past wasn’t always better, as it mends the flaws of classic adventure games with more logical puzzles, while still being a love letter to a bygone era. It is an enthralling, quirky game that genre enthusiasts can appreciate, but remains inviting enough for modern audiences.

Thimbleweed Park stars two FBI agents, a rookie paired with a veteran, investigating a murder in a small town. Set in the fictional Thimbleweed County in 1987, strange happenings occur as often as they would in Twin Peaks, from the whisper of “signals” in the nighttime to rumors of a conspiracy relating to a wealthy family. As the story unfolds, you play through flashbacks that unlock additional characters in present day. Once they are all unlocked, you switch between five drastically different protagonists, such as a foul-mouthed clown and a ghost looking for redemption. Seeing how Thimbleweed’s inhabitants interact with one another is fun, and so are their reactions to the world around them.

Thimbleweed County is large, with an open-world feel as you use a town map to visit places like a rundown circus and a hotel hosting a comic convention. Exploring each area is fascinating, but as the game opened up, I sometimes felt directionless with the overwhelming number of areas to consider when solving puzzles.

Although billed as a throwback adventure, Thimbleweed Park is much more than that. It plays like a modern Maniac Mansion, with a list of clickable verbs at the bottom of the screen used to interact with objects and characters. The verb list is a clunky design abandoned by most modern adventure games, but it feels at home in this homage. Developer Terrible Toybox is aware of the shortcomings of classic adventure games, and the verb list can feel both ironic and creative in certain situations. For example, a ghost character has a unique set of verbs granting him special abilities, while other actions like “despair” have no use outside of making him voice morbid complaints.

With two difficulty settings, hard and casual, Thimbleweed Park mends the flaws of older adventure games without sacrificing the charm. Hard mode features clever, multi-step puzzles that can be difficult to solve but are rarely obtuse. Listening to dialogue cues, such as a reporter mentioning that she is waiting for a call, can nudge you in the right direction. In casual mode, puzzles have streamlined solutions, removing specific steps such as no longer requiring a combination to open a safe. This makes the game feel shorter, but makes puzzles easier and more approachable.

Some puzzles are character specific, while others require multiple characters to solve, such as teaming up to disrupt a radio station’s broadcast or throwing an item into a sewer grate to aid a kidnapped character. These logical multi-step puzzles are where Thimbleweed Park shines most. However, inventory management between protagonists can be tedious, since you need the characters to be in the same location in order to exchange items.

Thimbleweed County is a strange place, with even stranger townsfolk who entice you with their bizarre but captivating personalities. I enjoyed warming up to a ghost tasked with scaring people in an elevator, and realizing the sheriff, coroner, hotel manager, and others all oddly seem like the same person except for slight dialect changes. Details like these make Thimbleweed Park an excellent comedic experience, enhanced by self-aware humor poking fun at the genre (including many nods to old LucasArts adventures). Gags like using Ron Gilbert as a fake name to check in to a hotel are endearing and pleasant surprises.

Metafictional satire is one of Thimbleweed Park’s stronger points, but Terrible Toybox overuses clever jabs pointing out genre tropes over the course of the game. This muddles up the main storyline later on and creates plot holes, warping other aspects of the narrative to feel meaningless. At its best, Thimbleweed shakes things up in creative ways, building on its classic foundation and veering off in surprising directions; it asks you to leave the game to search elsewhere in order to solve a puzzle, and prompts you to save your progress before pushing a button that results in a game over. The latter is a brilliant, satirical take on dead-ends in adventure games, which Thimbleweed Park adamantly avoids.

Thimbleweed Park revels in its humor, and succeeds in its efforts toward better puzzle design. The narrative takes some twists and turns that didn’t always hit home with me, but I enjoyed the whimsical journey nonetheless. With its stellar characters and smart puzzles, Thimbleweed Park is a joy to play from beginning to end. 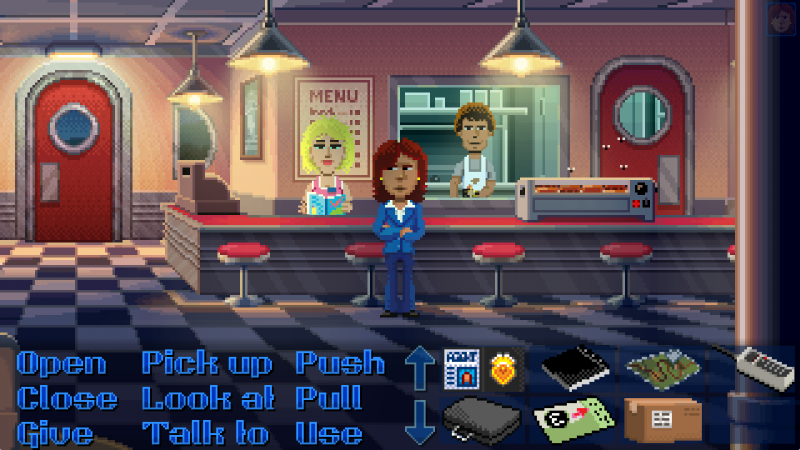 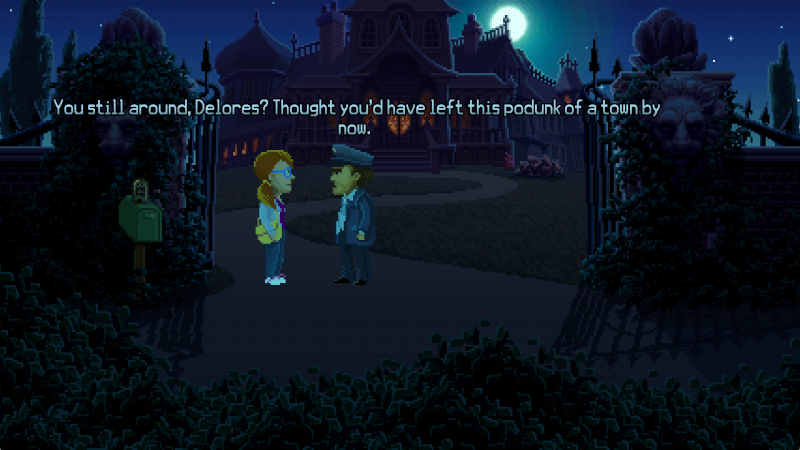 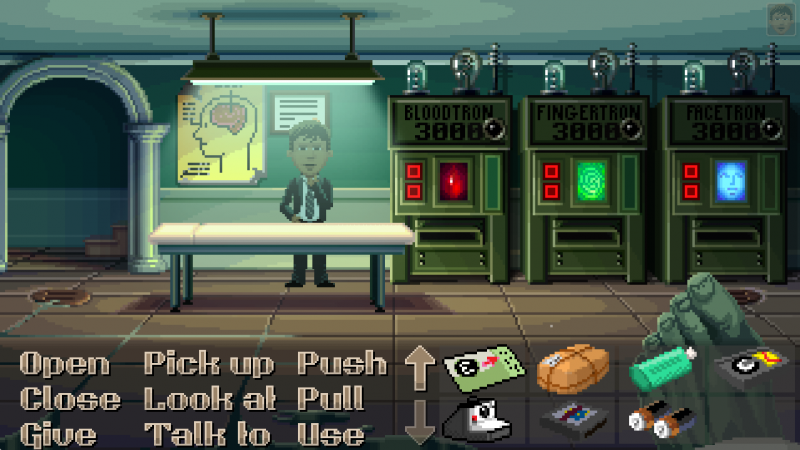 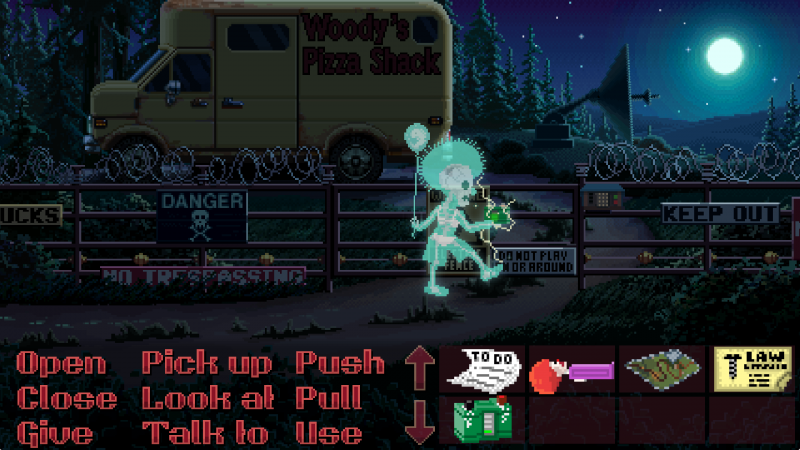 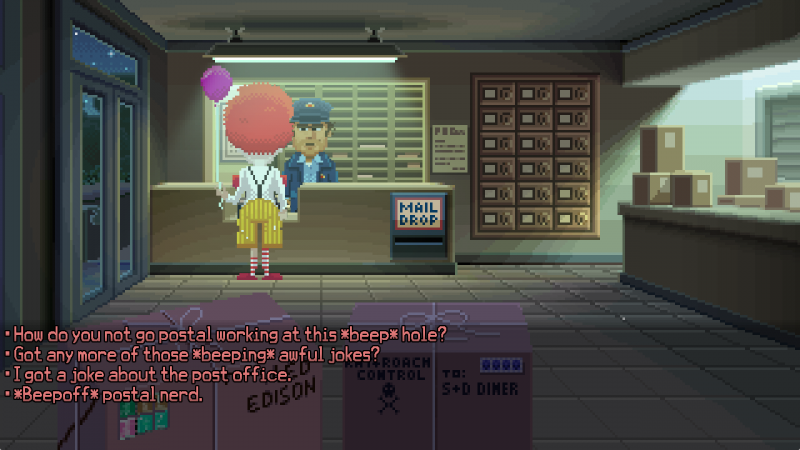 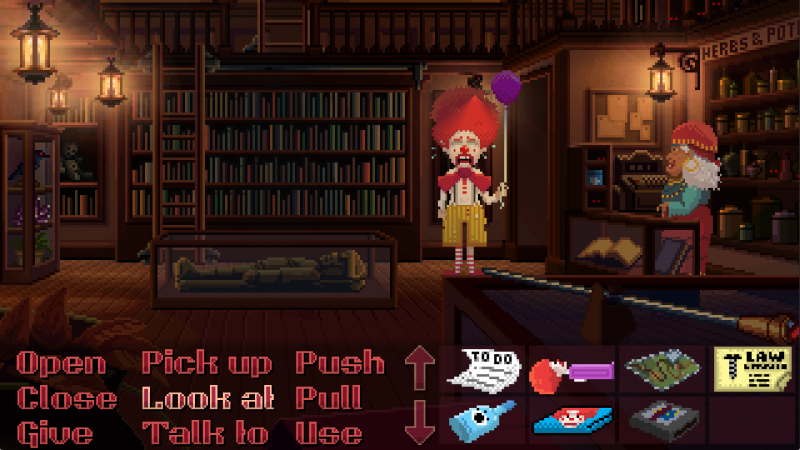 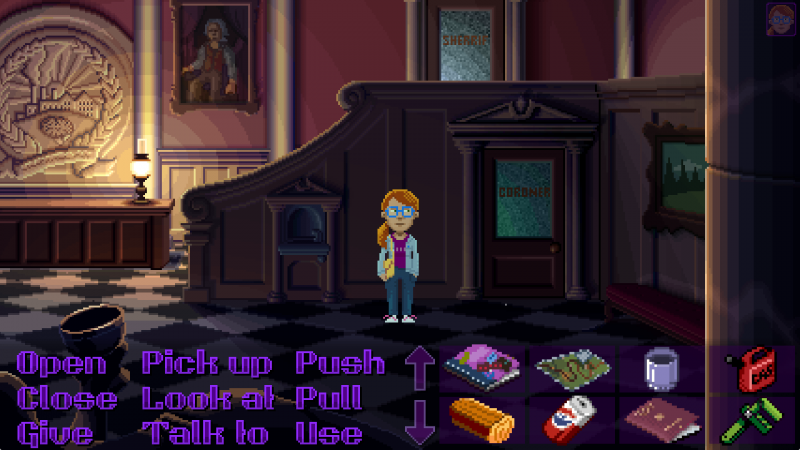 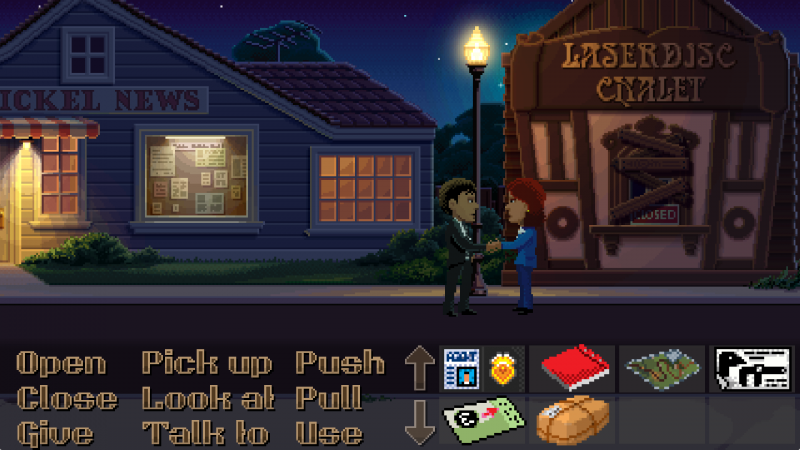 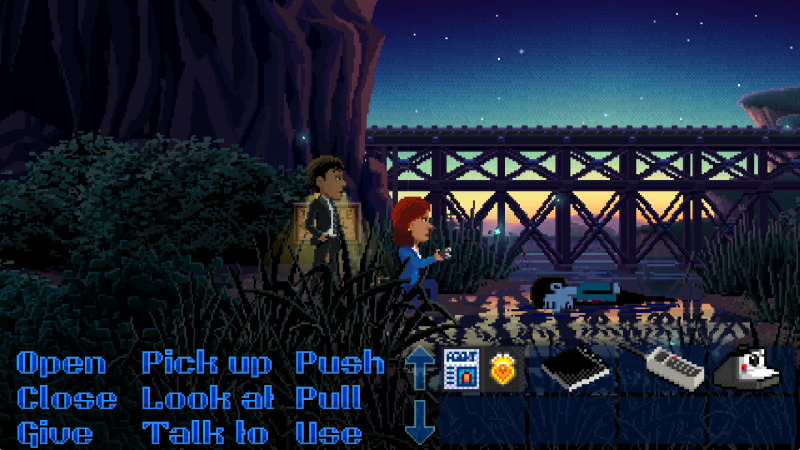 8.5
About Game Informer's review system
Concept
Attempt to solve a murder and a string of conspiracies by completing puzzles as five different characters
Graphics
The pixelated graphics are evocative of an older era, while also looking crisp and colorful
Sound
An ominous and suspenseful soundtrack adds to the mysterious atmosphere of each location
Playability
You interact with characters and solve puzzles by clicking a list of verbs at the bottom of the screen, which feels archaic in design but appropriate for an old-school homage
Entertainment
Thimbleweed Park is endlessly entertaining, with clever humor and several references to classic adventure games
Replay
Moderately High