The Wolf Among Us: Episode 5 - Cry Wolf Review

The path to change is often full of setbacks and hardships. Bigby Wolf knows this all too well. It took a murder to alert him to the corruption surrounding his beloved Fabletown. Then he discovered the tendrils crawled even deeper, uncovering a prostitution ring run by a figure called The Crooked Man, who is blackmailing Fables to do his dirty work. What's a sheriff to do? The Wolf Among Us' finale puts justice in your hands; the decision feels liberating and impactful, giving you a final mark on Fabletown.

Episode 5 begins with Bigby face-to-face with The Crooked Man and the members of his crime ring. It is the encounter the season has been building to, and Telltale makes it an unnerving and interesting scene. The Crooked Man may sometimes fall into clichéd villain territory, but he works because you can tell he's always a step ahead of you. The tension is palpable, and the whole episode I had an uneasy feeling as I watched more Fables crack under the pressure, making startling revelations about the murder, Fabletown, and The Crooked Man.

Some minor characters develop further and become more important. Vivian and Georgie are more candid, and they share a particularly tragic and touching moment. Telltale also does a great job of fleshing out Nerissa (The Little Mermaid). Her role makes more sense, and you see the character in a different light. Despite these developments, I still did not feel a strong connection to the characters. Deaths didn't strike me the way they did in The Walking Dead, and I rarely felt conflicted or emotional about my choices. The one relationship I did care the most about (Bigby and Snow) started to become less important as the episodes progressed.

The finale does a lot of what's expected, with big fights, a get-under-your-skin villain, and moments of redemption. This is its biggest problem. Outside of a questionable, last-minute revelation, it remains a run-of-the-mill detective story. The episode still does plenty right. I appreciated the revved-up action, especially after last episode under-delivered. A chase scene brings some needed adrenaline, and the fight between Bigby and Bloody Mary stands as one of the best fight sequences Telltale has done.

Your past decisions also factor in (like who goes to the farm and stays), but Telltale still doesn't make these choices reach as far as they should. It falls back on the same uncreative method from The Walking Dead; you listen to people rattle off what you did, rather than witness any meaningful consequences. The scene is reminiscent of The Walking Dead's disappointing walkie-talkie man. I was hoping Telltale wouldn't repeat a similar, unsatisfying scenario.

Thankfully, Episode 5 gives you plenty of choices of how you want things to end. You decide what being just means, and there's no right or wrong answer. Even when you think everything is resolved, Telltale gives you one last bombshell to ponder. This twist got me thinking, driving me to replay certain parts of the story to figure it out. That's the most admirable part of this finale; Telltale leaves a lot up to your interpretation and values. Maybe you'll realize you made some mistakes along the way, or maybe you'll feel like you've done some good. The point is you've been role-playing as Bigby, trying to fight against the corruption the way you see fit.

Despite all the good parts, the finale is underwhelming, which sums my feelings about the overall season. It has amazing moments, but the missteps along the way make them harder to enjoy. I didn't walk away from the finale amazed, yet I did feel satisfied. Episode 5 ends smartly, leaving you with something to think about – one last mystery for the detective in you to examine. If only that last moment wasn't the only one in the five episodes that made me feel that way.

Note: This review is based on the PC version. The Wolf Among Us is also available on PS3, Xbox 360, and iOS.

7.5
About Game Informer's review system
Concept
Confront The Crooked Man and bring justice to Fabletown
Graphics
The unique art style still shines through and the creative designs of characters in their fairytale forms stand out
Sound
Voice actors play their roles well, and the dialogue feels natural
Playability
More fast-paced action means that you don’t have as much time to react as in past episodes, but failure is unlikely
Entertainment
The finale resolves lingering questions while giving you more to ponder
Replay
Moderate 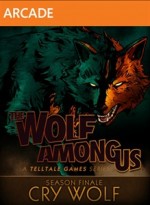 The Wolf Among Us: Episode 5 - Cry Wolf