The Wolf Among Us: Episode 3 - A Crooked Mile

Should You Fight Your Instincts?
by Kimberley Wallace on Apr 08, 2014 at 07:47 AM
Publisher: Telltale Games
Developer: Telltale Games
Release: April 8, 2014
Rating: Mature
Reviewed on: PC
Also on: PlayStation 3, Xbox 360, iOS 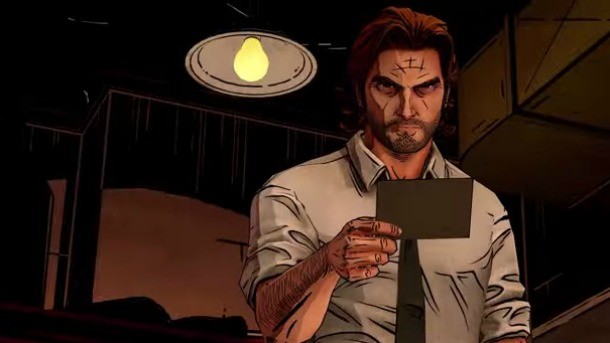 In Telltale's glimpse into the seedy world of Fabletown, we've already seen murders, prostitution, sociopaths, and plenty of corruption. Watching Bigby interact with the Fable community and its growing class divisions serves as a great lead up to where the comics pick up. A Crooked Mile continues to expose the issues of Fabletown's community, but also builds on the ongoing murder investigation, leaving you piecing together exactly where it's all headed.

Last episode, Smoke & Mirrors, didn't have as much momentum as I would have liked, but A Crooked Mile has much better pacing and development. A Crooked Mile picks up with Bigby adding familiar Fables to the suspect list and worrying about which Fables are in jeopardy. The second Fable death is still lingering, the funeral is under way, and members of the community are even more aggravated and demanding answers. This keeps you hot on the tail of those responsible for the murders, assessing your leads and following up on the most promising clues.

Telltale puts more of the investigation in your hands this episode. You have three different places to visit, and you choose where to go and when. Should you look for more dirt on the suspicious Tweedle Dee and Dum, search the belongings of the recently-deceased Fable, or go to the apartment of the newest suspect? No matter what, you can only go to two of the three locations. Depending on your choices, you interact with different Fables and gain insight into various characters and events. Telltale does a good job of giving you reasons to pick any of the three locations. Whichever one you don't visit will be investigated by another Fable, which presents its own problems. Do you trust your ally not to tamper with evidence? I second-guess who I can trust constantly. Everyone feels like a suspect, and that's exactly how it should be when you're investigating a murder.

As for the time and place choices, the end result leads you to the same final destination, but seeing different variations on how you reach this conclusion provides new content, making you feel like your choices mean something. These impactful choices work well, so I hope Telltale continues making them a part of future episodes. They make you assess what you're about to choose without any right or wrong answers. This episode also features a decision with far-reaching consequences; no matter how you choose, the future will be immutably affected.

Making these choices as sheriff isn't easy. You don't exactly have a fan club as the murders and corruption get worse. You must decide how you want to handle and appeal to various Fables. Dialogue choices are top-tier in this episode, ranging from how the Big Bad Wolf would handle a child to confronting awful circumstances with sincerity. I felt like I was determining what type of man Bigby's going to be in the middle of turmoil. You can play him as a man doing everything in his power to redeem himself, or as a level-headed man who prevents his in-the-moment emotions from clouding his judgment.

You aren't just picking Bigby's temperament. Telltale often pits you against other characters; if you think another Fable is wrong, do you risk calling them out and potentially put a strain on your relationship, or do you agree to appease them? The role-playing choices don't stop there. When you finally give in to Bigby's wolf tendencies, Telltale lets you decide how far to take it. Having a slew of different ways to role-play as Bigby kept me more invested in the experience than in previous episodes.

A Crooked Mile is a much more balanced episode than its predecessor. The excellent pacing, the varied choices, and how the writers still make me guess their next move keeps this episode riveting. Much like a good murder-mystery television show, you see the plot starting to unravel, but you're never confident that you know exactly where it will end up or who's at the root of all the problems. The new antagonist introduced in the closing scenes of the episode makes me excited to see where the next entry takes the story. One thing is certain: Something bad is going on in Fabletown, and Bigby is tasked with changing the community's fate. Now the real question is: Will unmasking the mastermind be as exciting as the build-up?

Note: This review is based on the PC version. The Wolf Among Us is also available on PS3, Xbox 360, and iOS. 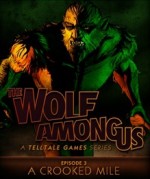 The Wolf Among Us: Episode 3 - A Crooked Mile

Bigby is still hellbent on saving Fabletown, but does this episode keep you invested?

Purchase More Info
8.5
i
Game Informer's Review System
Concept The investigation heats up with new leads, forcing you to decide how far you’ll go as the Big Bad Wolf
Graphics Not much has changed, but the gruesomeness is dialed up in A Crooked Mile. It fits the tone and is what you’d expect from the comics
Sound Voice acting is well-done all around. New characters are cast wonderfully, especially Mary
Playability The point-and-click controls still work for the action sequences and investigation parts. The episode also focuses a lot on dialogue choices, lending you even more ways to role-play as Bigby
Entertainment A Crooked Mile takes the story in interesting new directions, while also giving you more of a say in how and when events pan out
Replay Moderate