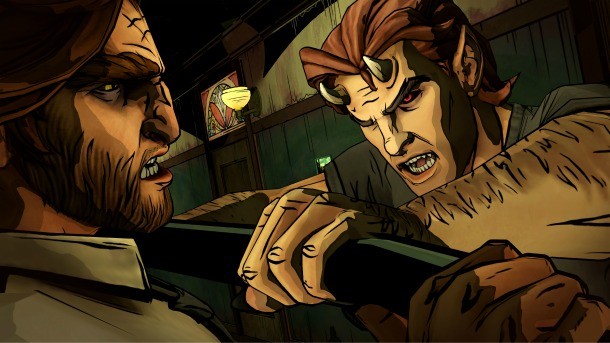 Telltale's opener to The Wolf Among Us proved its commitment to Bill Willingham's Fables and its dark side. The first episode ended on a startling cliffhanger, leaving the second, Smoke & Mirrors, with some big shoes to fill. While still engaging on its own, without any groundbreaking decisions or exciting sequences, Smoke & Mirrors feels a little empty.

Smoke & Mirrors slows down the action from the first episode to deliver more about Fables' universe and introduce a slew of new characters. It gets you out in the world to explore as you resume your investigation to track down the Fable murderer. The transition is engaging, especially seeing how twisted the Fables' world is, with strip clubs and fairy tale characters forced into prostitution. Episode 2 also explores more of the class division between certain Fables - something I'm hoping continues, as it further explains how some went down such a dark path.

My biggest gripe is that this episode debuts too many characters without letting them find their place. For instance, the infamous Jack from fairy tales such as Jack & Jill and Jack and the Beanstalk makes his debut, but is little other than annoying. On the other hand, expansion of characters like Ichabod Crane is a welcome addition, especially considering his role in the comics. Crane's writing is well-done, keeping you questioning his motives but wondering if he's just misunderstood at the same time. I can only assume that the under-developed characters will get more opportunities to grow in future episodes, but their roles feel half-baked for now.

Smoke & Mirrors' gameplay is more barren than the previous episode, and it takes a toll. Remember those cool time-stopping, big decision moments from the first episode? Episode 2 doesn't feature a single one. To make things worse, the decisions you did make last time don't seem to matter; outside of your treatment to certain characters, like Beauty and Beast's dilemma (which isn't particularly exciting), you don't see ripples from your previous actions. I hope more hard-hitting consequences appear in future episodes because right now the scope of the decisions feels miniscule.

Smoke & Mirrors also focuses on relationship-building, which is more about proving yourself to certain characters. This is done through interrogation sequences. Can you question a child without being too forceful? Will you break stuff around a strip club to get answers? As the Big Bad Wolf, should you physically harm someone to find what you need? Telltale places these choices in your hands, but sometimes they feel too guided. For instance, instead of giving you an option to break one or two things, you have a handful. It starts to make you think the developers want you to behave in a certain way. Being repeatedly offered similar decisions makes the process lose its luster.

You're still investigating murder scenes, but it feels as though connecting clues has been dumbed down. Telltale places the answers right in front of you. What's going on is obvious, but you need to confirm it through dialogue and clues numerous times. This was done better in episode one, where you were connecting what happened to Toad, but piecing it together wasn't as in-your-face-obvious as it is in this episode's investigations.

I was let down by how slow-moving Episode 2 is; it feels more like a bridge in the story than a complete chapter. Still, I can't deny that the world and the mature tone are captivating. The latest chapter doesn't tarnish my enthusiasm for where the story's going, especially with a new cliffhanger that leaves you just as concerned and stunned as the last one. I still can't wait to see where Telltale goes as it explores more of the seedy world of Fabletown, but Episode 3 needs to cover more ground. This episode hardly fails though; the "that's messed up" reactions that hit during this episode are its strongest offerings, making it worthwhile. I just wish it had a little bit more meat on its bones.

The Edge
The PC still trumps the PS3 and Xbox 360 versions when it comes to visuals and load times. Waiting for new scenes or smaller loads within them was pretty equal between the PS3 and Xbox 360. However, the PS3 still outshines the 360 slightly in the graphics department.
7.5
About Game Informer's review system
Concept
Continue to investigate in pursuit of the Fable murderer
Graphics
Graphics still look sharp and the new, detailed locales capture the darker tone perfectly
Sound
The ‘80s synth matches the time period well, with other appropriate music throughout. The voices are solid, but repeating actors from The Walking Dead is distracting at times
Playability
Point-and-click controls still get the job done, and action sequences are forgiving. This chapter is more about story and exploration with limited gameplay
Entertainment
Telltale is crafting an engaging story in Bill Willingham’s twisted Fables universe, keeping both fans and newcomers hooked to see the next thread
Replay
Moderate