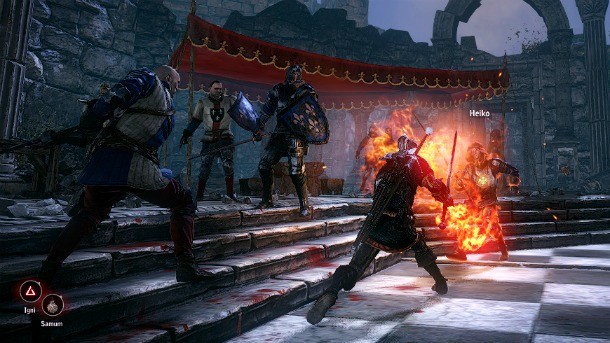 I’ve spent the last year holding up The Witcher 2: Assassins of Kings as a compelling reason to make the investment in a gaming PC. Its weighty combat, difficult choices with real consequences, and fascinating storylines are some of the best gaming has ever seen. I can no longer lord it over the console masses with this one, though, because this long-in-development Xbox 360 port is just as amazing as the original. It’s actually better than it was at launch thanks to the year of patching, refinement, and additional DLC content that this version benefits from.

Main character Geralt, the eponymous witcher, is in his own words “a mutant created for swordsmanship.” As I look back on the game, I’m surprised to find that the “mutant” part of that statement is the most important. Tearing apart foes with Geralt’s acrobatic blade work and magical signs is fun, but taking on the role of a hated and feared inhuman adventurer in this rich world is so much more than that.

Choice and consequence in The Witcher 2 isn’t the kind of moral absolutism that most RPGs featuring choice typically descend into. It’s helping a fanatical anti-human terrorist or an amoral spymaster, chasing down a murderer or saving (ahem) brothel employees, and punishing or profiting from ancient war crimes. Depending entirely on the player, Geralt can be a beacon of hope to the common people, a whimsical drunkard, a terrifying avatar of vengeance, or a selfish smartass. More importantly, the witcher has logical reasons for each action or response and the player simply decides which of his motivations has priority. Furthermore, the situations (treatment of minority groups, occupation by a foreign power, abuse of authority, etc.) have obvious real-world analogs that have far more emotional resonance than your typical save-the-world video game plot. It doesn’t hurt that the middle section of the game is radically different depending on one particular decision. 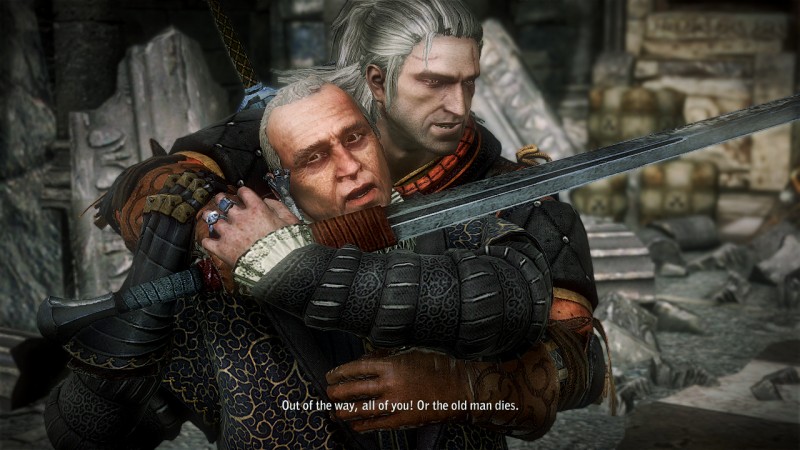 The tale is a thick web of politics, magic, love, and revenge that weaves interesting characters around historic events that could be medieval Europe with different names but for all the monsters and magic. The world, exquisitely detailed in the books by Polish author Andrzej Sapkowski that The Witcher is based on, hangs together well enough to make the plotting of the various factions and nations fascinating. Powerful sorceresses, rival witchers, kings, and generals all have their own agendas and motivations, many of which will surprise you once you decode the truths, half-truths, and outright lies that the story is parceled out in.

The developers did a wonderful job decoupling narrative from mechanics, so you won’t make a decision based on which mission branch gives a more powerful quest reward. Even if the possible items for different paths were laid out up front, though, you probably wouldn’t care. The loot game is boring and has little impact on your combat performance so long as you remember to equip that new suit of armor you just got and mix together enough bombs and potions to keep your pockets full. This is an improvement over the original PC launch, which was irritating and mandatory instead of merely dull and trivial.

Geralt’s success in combat is predicated on player skill, not stats – though a modicum of thought into picking skills that complement your playstyle as you level up pays great dividends. The flipside of that is that the player is punished harshly for trying to button mash their way to victory. Keeping track of the positioning of enemies, avoiding being surrounded, and making good use of magic and consumables like bombs is a must unless you want to constantly be reloading. The tactical challenge is mostly entertaining, though a few horribly balanced encounters are beyond frustrating. The one consistent misstep in the scripting is in throwing the player directly from dialogue into nasty combat situations with no time to prepare or save and an autosave point too far back for comfort. I had to replay many sections of the game several times thanks to unconscionably absent checkpoints.

The Enhanced Edition bonus content is fine, but has little impact on the overall game and is nothing to re-purchase it for – especially since owners of the PC original are getting that as well as this release’s rebalancing in a free patch on launch day﻿.

There are very few differences between playing this on 360 or a high-end PC. The graphical gap is noticeable but trivial, load times are short and infrequent on both, and the game plays equally well on mouse/keyboard and gamepad. Several complaints I had about the original – horrid inventory management, punishing early difficulty, targeting problems – have been patched away since launch, and those improvements are incorporated here (thus the slightly higher score). The few flaws I take issue with should in no way discourage anyone from playing this fantastic, unique RPG. So long as they’re over 18, anyway, because this is the most deserving M rating I’ve ever personally played through. 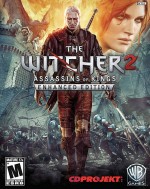 This long-in-development Xbox 360 port is just as amazing as the original.

Purchase More Info
9.5
i
Game Informer's Review System
Concept Thread your way through a branching, epic plot that has equal parts heroism, villainy, combat, booze, and (ahem) short-term romantic encounters
Graphics This looks almost as good on 360 as it does on PC. If you put your mind to it you can find some low-res textures and level-of-detail pop-in, but they do little to cheapen the experience
Sound Every piece of dialogue is voice acted, and very few exceptions mar the generally high-quality work in a variety of accents
Playability Navigating both combat and menus works great on a 360 pad. Don’t confuse the game’s modeling of momentum and the long animations for being hit or parried as unresponsiveness
Entertainment This unique RPG is finally available to console owners, and not in any kind of diminished form. This is a triumph of technical achievement, world-building, and plotting
Replay High