So, you say you want to start a revolution? As we've seen through history, the press has helped facilitate change by informing the public of corruption. The Westport Independent gives you the intriguing duty of managing an independent newspaper in the final weeks before a government censorship bill passes. Will you make your last days matter by printing the real issues and exposing extortion or will you try to stay on the government's good side to avoid a total shutdown?

Unfortunately, that summary is more exciting than playing The Westport Independent. It takes place in a fictional post-war country, where an oppressive government rules with an iron fist, censoring movies and preventing subversive propaganda. Two extreme groups have formed: The Loyalists, who are in blind support of the government, and the Rebels, who want to bring it down. As editor-in-chief, you select which stories to run, alter headlines, select writers, and omit certain information to push your agenda. The concept has potential, but falls short due to undercooked ideas.

Your main goal is to tell the side of the story you want and attempt to sway the other side if possible, all while selling newspapers. However, the game doesn't make it seem like the other side can waver, nor does it explain how you can influence public opinion in the opposite direction. For instance, advertising is more strategic than it first appears. You can advertise to increase your popularity in certain districts, but their political allegiance still dictates their opinion, so you have to throw in some articles to please them if you want them to support your paper.

I constantly felt like I didn't have enough options to report the way I wanted; instead, it felt like it was making reporting too cut-and-dried to be satisfying. You can't even get extra sources to confirm the stories you're receiving are true. The whole interview process is absent. In journalism, it's essential to get both sides of the story to print, but you never get that opportunity. You only get two headline options for the news that appears in your inbox. When you select the headlines, your choices are either sensationalized or sanitized; more options would have gone a long way. Sometimes you're forced to pick a side in your title, choosing to tell the story from the Loyalists' or the Rebels' view. After all, you're trying to sell papers, but at what cost?

That brings me to one of my other problems with The Westport Independent: it operates on extremism. It doesn't have middle ground - reporting events as they happen doesn't get you anywhere, as your paper sales and popularity depend on catering to these rabid groups. Maybe insincere pandering to a specific audience is part of the point, but the game makes you feel like you're this town's last hope for change, making you not want to feed into either group's problematic agenda.

This can be tough, because both sides do some horrible things to get what they want. The Loyalists will look the other way at the police being violent if it ensures less crime, while the Rebels have no issue with ignoring laws and leading dangerous and violent protests. Egging on either of these groups can accelerate their extremism; rebels resort to terrorist attacks, and the police get more corrupt in dealing with dissidents. If you go full-on with catering to the rebels, the government shuts you down, resulting in a game over. Siding with the government only has narrative repercussions, resulting in them increasing censorship and influencing the academic curriculum.

Your staff is also in the crosshairs. Of your four writers, each lands somewhere on the Rebel or Loyalist scale. They may refuse to write certain stories if they represent the opposing side. Assigning the work to the right people is a balancing act, and the government might arrest your employee if the story goes too far, giving you fewer articles to print. At the very least, you learn about your staff's feelings about the articles you print each week in small skits that delve into their personal lives. This is a nice touch, as it humanizes them instead of just making them faceless supporters of one side.

If your paper can stay open without making the government suspicious of propaganda you get an ending that focuses on the state of each of the four districts you sell the papers in and the current lives of your staff members. You can't stop the bill from passing, but you can overthrow the government. Most playthroughs will take anywhere from 30 minutes to an hour depending on how thorough you are, but you can test out different strategies and see how they play out in the multiple endings. Even so, the endings are unsatisfying. Winning over these extreme groups by catering to their agendas is easy. However, I was disappointed to see the game end without any solutions or progress, despite the fact that I feel like I made the right calls and ran stories that exposed corruption. I had the most fun seeing how covering certain stories played out and seeing if I'd get a nasty letter from an unhappy reader or government official.

The Westport Independent is a great idea, but doesn't have enough content to capitalize on it. More strategy, variety, and reward would have gone a long way. Journalism is far from a glamourous job, but stories that make a difference are the most gratifying part. Unfortunately, The Westport Independent never made me feel that was possible. 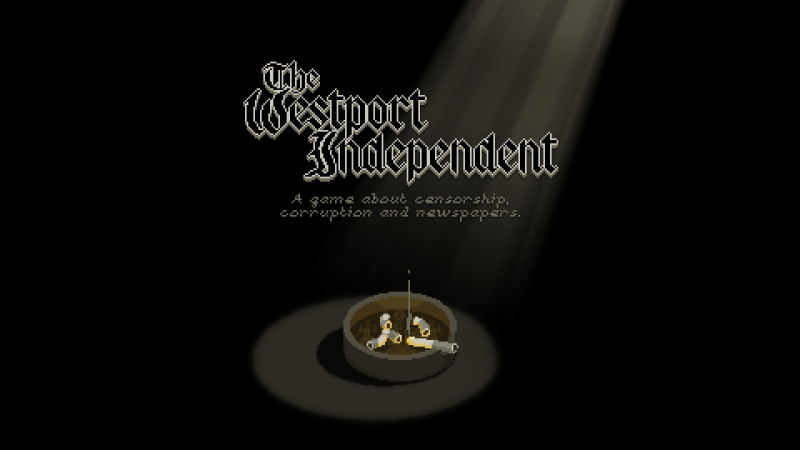 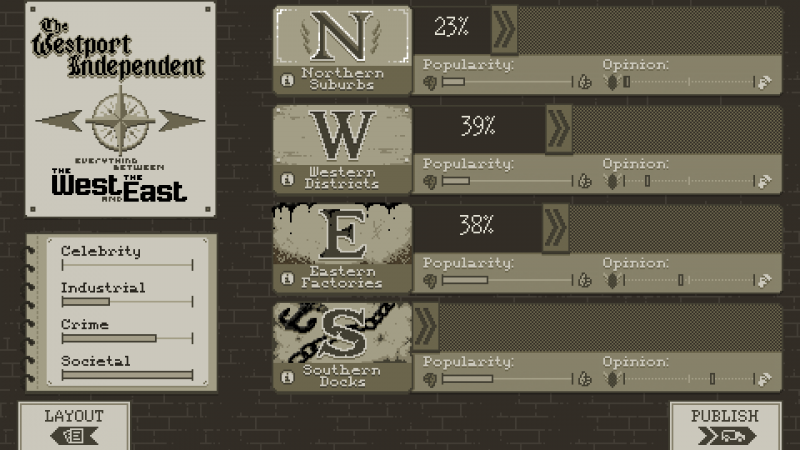 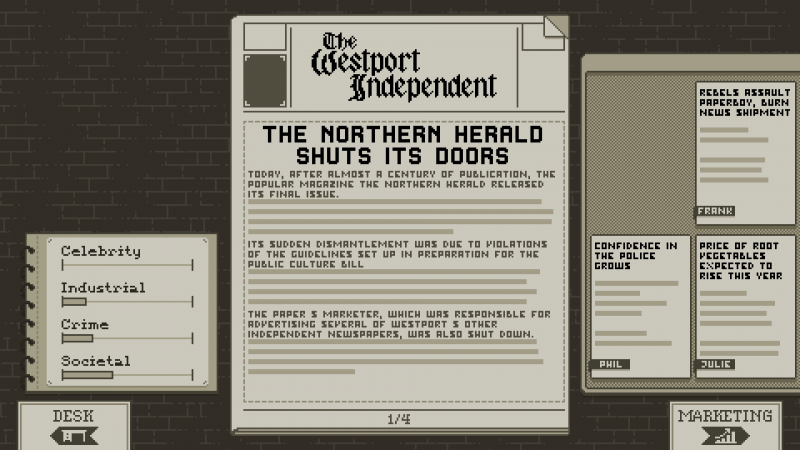 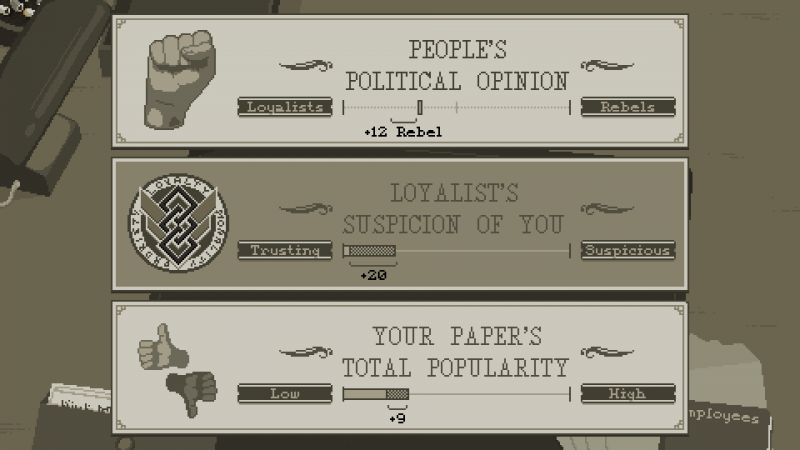 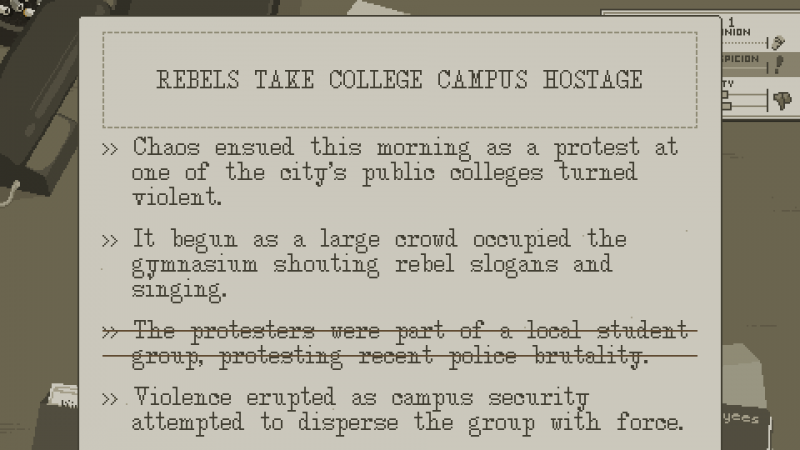 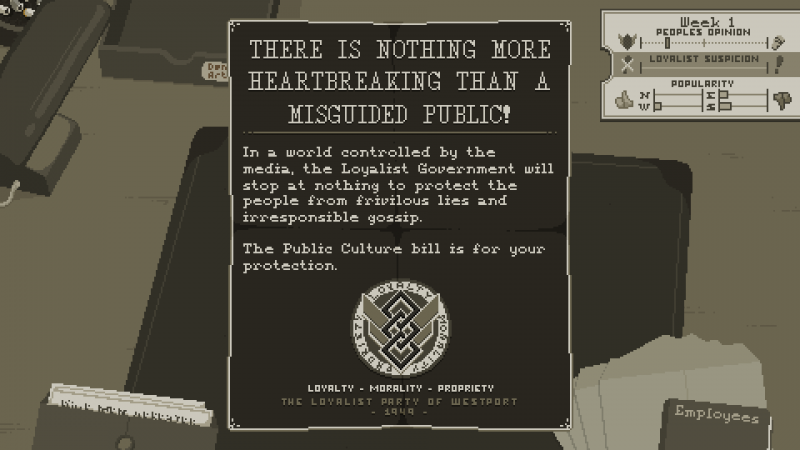 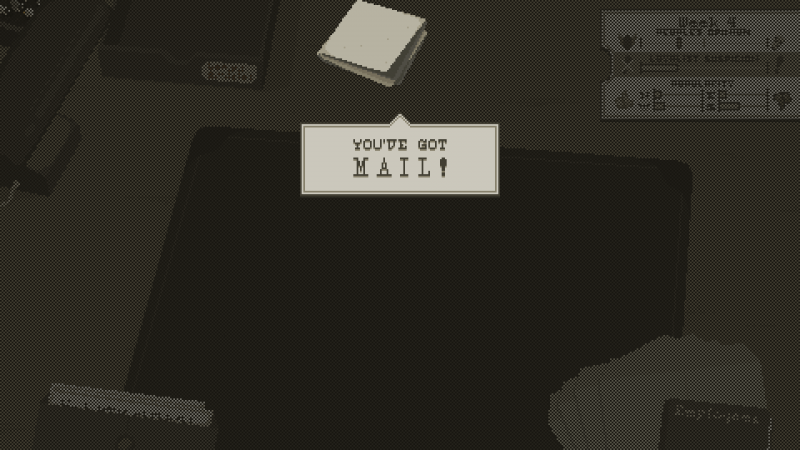 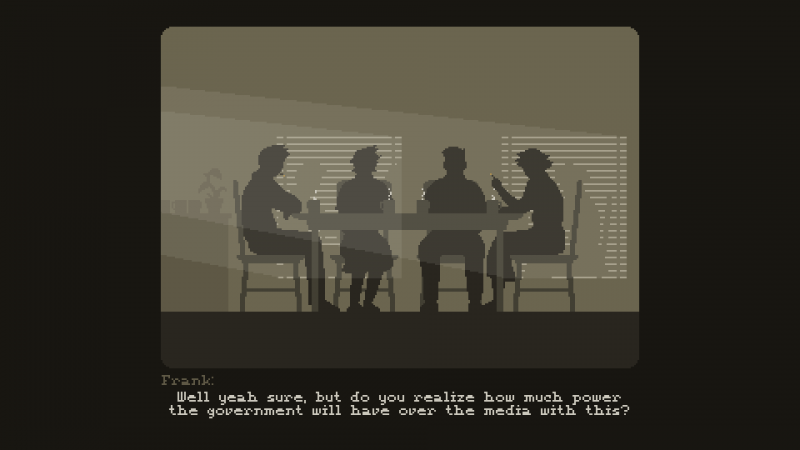 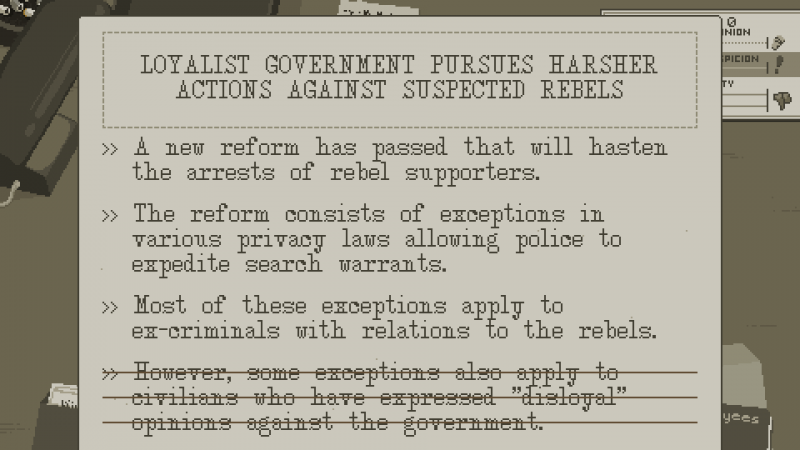 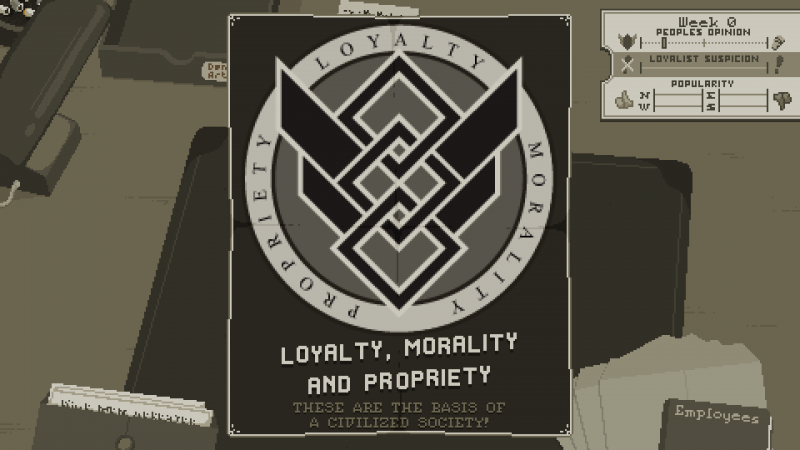 6.5
About Game Informer's review system
Concept
As editor-in-chief, you must decide which articles and headlines to print without making the government suspicious of your intentions
Graphics
The simple art style works well, allowing you to focus on the things that matter: stories and assignments
Sound
The minimalistic approach extends to the sound effects, which aren’t memorable
Playability
After a brief tutorial, you’re set loose to figure things out for yourself. Some of the systems like advertising and influencing different districts could be better explained
Entertainment
The Westport Independent is amusing, but I wish it had more depth
Replay
Moderate