The Walking Dead Season Two - Episode 4: Amid the Ruins Review 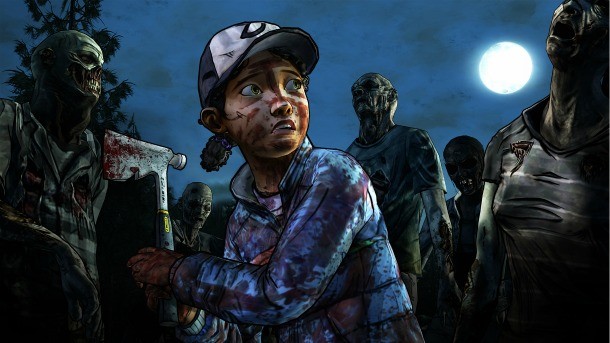 A zombie apocalypse has bleakness and desperation - something that The Walking Dead has always embraced. Can you remain sane in such a hopeless situation? When do you finally just give up and realize that surviving is more trouble than it's worth? Telltale has done a wonderful job exploring the will to live and still finding hope amidst such a harrowing situation. Episode 4, Amid the Ruins, reminds me why that's important.

Amid the Ruins is slower paced, but the plot still advances and takes intriguing turns. The last two episodes were high on adrenaline, bombarding you with shocking reveals. This episode still has its surprises, but they creep on you instead of punch you in the gut. What I liked most is that it got me contemplating what's best for Clementine and challenged me to see her alliances in a different light.

The episode begins right where the previous one left off: You're trying to get through a large zombie horde without being noticed, but things turn chaotic when one of your group members gets attacked. You witness the aftermath of this event while still figuring out a way through the massive deadly wave. This is where you start to see your alliance start to crack; nothing is going smoothly and you've lost track of about half of the people. A common struggle of this episode is fighting between emotion and logic, forcing you to assess who is an asset and who is a liability to your survival.

The storyline does a lot right. It takes characters in interesting directions, like newcomer Jane. Telltale has a habit of introducing characters and not always giving them a place in the story, so I was glad to finally get some insight into Jane. She is tough, and has learned to survive on her own after losing her sister. She takes Clementine under her wing and teaches plenty of survival skills, like a new way to kill zombies by tripping them and then stabbing them in the back of the head. Jane also has some emotional baggage she's trying to hide, and you never really know when it's going to surface. She's unpredictable - a ticking time bomb - but the front she puts up makes her realistic.

Despite fleshing out Jane, other characters are beginning to lose their places in the group. Telltale also introduced Mike last episode, but outside of a few humorous lines, he's merely been an extra body. I can't tell you much about him. Luke has also lost his place in his plot, even though it originally looked like he was going to be a big influence on Clementine.  Now his role has been diminished to getting into arguments with another character. Telltale tries to inject him in the plot this episode, and he always feels out of place when they do.

Part of my concern with the zombie apocalypse setting is that the environments you see start to get old fast. Camps, roads, and forests all start to look the same after a while, but Telltale got a bit more creative this episode. You visit a museum, break into a gift shop, and then the weather changes into a snowy blizzard. The gameplay is tenser than in previous episodes, thanks to certain sequences where you have a limited time to find the right solution in the environment. I like these moments, since the diminishing time adds the stress you should feel during these situations.

Unfortunately, Telltale also goes back to some slower sequences, which have you searching environments for specific objects. These aren't as fun, especially since Clementine's walking animation is so slow. The environments aren't even large, but it still takes her too long to get from one end of the screen to the other. At the very least, Telltale doesn't make Clementine shoulder the burden of every problem this time around. In fact, in the one instance you can use her, it backfires. I was happy to see the group not turn to an 11-year-old to solve every dilemma.

Amid the Ruins shines most when Telltale slyly turns the tables on you. Is being nice to people always the best option? For instance, you are a given a choice when you find a lot of painkillers. A few group members are injured and Rebecca is about to have a baby. The decision seems easy - but you must steal the medicine from someone with a sick sister. This was one of the more effective direct decisions, but I also appreciate how the episode starts building to bigger dilemmas. How can you trust anyone during the apocalypse? What makes someone else's needs more important than your own?

These issues constantly put my emotions to the test. For instance, I may like Jane, but her reckless behavior may one day be costly. Playing as Clementine also helps, since you always want to give her the best odds by making the best decisions for her. For the first time, I looked at the group that took her in as potential liabilities. Members of your alliance are starting to either become dead weight or emotionally unstable, and it might not be best for Clem to stick with them.

From somber deaths to one satisfying slap, Amid the Ruins has a lot of memorable moments. As you approach the end, you're left in an unexpected place that keeps your head spinning. Telltale was smart to involve players in this final moment, forcing them to make a knee-jerk reaction to a complex situation. Season two has been fantastic so far, but this episode makes me even more curious and anxious for the finale. It resurfaces the question: Can Clementine ever be happy living in this awful world?

Note: This review is based on the PC version. The Walking Dead is also available on PS3, Xbox 360, and iOS.

8
About Game Informer's review system
Concept
Try to keep the group together and search for a safe place as dangers rise
Graphics
Some graphical hiccups show, but everything is on par from what we’ve previously seen
Sound
Sound effects and appropriate music amplify situations. For the most part, the voice actors nail their roles
Playability
Telltale puts more time pressure on sequences and it works well to increase the tension
Entertainment
The plot remains solid, and Telltale does a great job at exploring different mental states during the apocalypse
Replay
Moderate