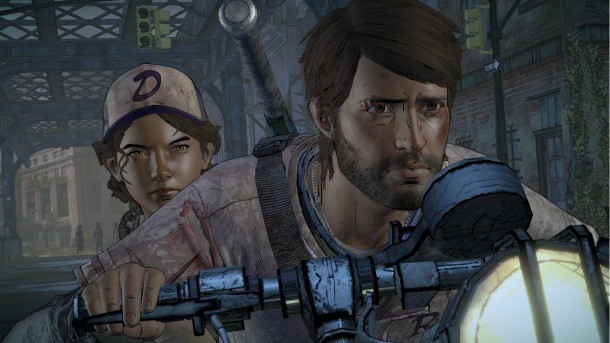 Keeping a story engaging gets harder the longer it goes on. Writers must balance new elements with familiar standbys to make the experience feel fresh. Season three of Telltale's The Walking Dead demonstrates this struggle, having its share of ups and down as it tries to capture the tough choices, interesting characters, and shocking twists fans love. This season has its bright spots, but it also suffers from recycled plot points and uneven writing. From The Gallows represents this season's inconsistencies; it has some satisfying moments, but it also features just as many head scratchers. At the very least, From The Gallows is a decent conclusion to Javier's story – but it didn't leave much of an impression on me.

This whole season has been centered on family, especially the bond between brothers Javier and David. The two clearly care about each other, but have always been at odds. Episode five challenges your devotion to your bloodline, as hothead David becomes more unhinged as the tension rises. I've enjoyed watching this relationship tear and repair throughout the season, and the finale lets you decide its final outcome. One fight scene brings their rivalry to a head and ranks up there as one of my favorite action scenes in the series to date. You can choose to fight through your issues or just let your brother know you love him, but the tense execution and how Telltale calls back to an earlier conversation with your now-deceased father makes it impactful.

Outside of your issues with David, the big conflict is what to do about Richmond. Last episode, chaos erupted in the settlement as a corrupt leader publicly painted your alliance in a negative light. It led to a large altercation, which resulted in bloodshed and the settlement's protective barrier collapsing. A large part of this episode is deciding if and how to make things right with Richmond before the zombie horde on its way pours in. While little callbacks to previous episodes are present, such as certain characters appearing depending on previous actions, this chapter comes down to one big decision, pitting your devotion to the ones you love against the greater good. Depending on how you build your relationships, the outcome of this choice can play out in many ways.

This made me happy, as Telltale has often had trouble making decisions feel like they matter. In fact, this season is the most I've seen choices impact The Walking Dead, although Telltale still has room to improve. The writing with some of the branching paths feels rushed and weak, and one clearly feels like the "correct" path. I won't spoil anything, but in one scenario a member of my alliance died and it was quickly glossed over. The characters spoke two lines and moved on, which felt unnatural. With a different selection, that scene changes drastically and the moment is much more memorable.

Another area that bothered me was inconsistent character motivations, since some decisions people make don't line up with what they've expressed previously. For instance, Gabe is at odds with David the entire episode, and even has a heart-to-heart with Javier about how he appreciates how Javier raised him  – but then Gabe supports David in one of the biggest decisions regarding the group's future. The whole episode tries to emphasize how smart and mature Gabe has become, but this moment enforces the exact opposite. Even with these missteps, I still enjoyed learning about these characters and where their stories ultimately lead.

The finale focuses on your legacy and what you want to leave behind with Javier, who made his share of mistakes before the apocalypse. Seeing the man he grows into is satisfying, especially knowing you had a hand in influencing his relationships and choices. However, it all leads back to Clementine in the end, making this adventure just feel like a side story in her larger arc.

The finale focuses on your legacy and what you want to leave behind with Javier.

Purchase More Info
7.5
i
Game Informer's Review System
Concept As legions of zombies approach, decide how far you’ll go to help the Richmond settlement withstand the attack
Graphics The visuals nail the tone of the dark and desolate world, but feel dated, especially when it comes to characters’ expressiveness
Sound For the most part, the voice acting is solid. A great closing song makes you reflect over the final moments wonderfully
Playability With simple QTEs and dialogue options, everything is easy to grasp and plays out smoothly
Entertainment The season ends with some intriguing and satisfying developments, but just like the rest of the season, it doesn’t maintain an even quality throughout
Replay Moderate