Several impressive games were featured at the Indie MegaBooth at PAX East last year, but one stuck with me more than the rest and left me excited to experience the finished product. Made by small developer Facepalm Games, The Swapper is a highly atmospheric, gorgeous title with a variety of mind-bending puzzles. The ride is over quickly, but it will stick with me for quite some time.

The Swapper’s sprawling map and 2D perspective may draw comparisons to Metroid, but its gameplay proves to be far different than the classic Nintendo franchise. You won’t encounter a single enemy, and all of the items and mechanics are introduced in the first 10 minutes. What’s amazing is how Facepalm presents such a wide variety of puzzles with such a limited set of tools.

You play as an astronaut stuck on Space Station Theseus. Almost immediately upon starting the game, you come across a swapper gun that proves critical to each and every puzzle. By holding the right mouse button and hovering over open space in the environment, you can use this gun to create up to four clones of yourself. These clones move and jump with the same keyboard commands as the “true” you, and many puzzles have you closely monitoring the position of several copies of yourself. By aiming at a clone and clicking the left mouse button, you can swap places with it. Clones can fall to their death or be crushed by environmental objects, but nothing matters unless the clone you control dies.

Colored lights conspire to make puzzles difficult for your space traveler. Blue light allows swapper rays through, but clones can’t be created in it. Conversely, you can create clones in red light but it blocks swapper rays. Pink light restricts both. Puzzles frequently involve creating clones and having them step on switches to shut off the lights in a specific way. It sounds basic, but The Swapper’s puzzles are hardly easy.

Like many of the best puzzle games, numerous moments in The Swapper made me stare at the screen in confusion for what felt like an eternity. Many convinced me that I didn’t have the tools to solve them yet, but I quickly learned that nothing but the swapper gun is needed for any puzzle. Few things in gaming are as satisfying as conquering a puzzle that stumps you for a half-hour. The Swapper offers this feeling frequently.

Without any enemies, boss fights, or long narrative breaks (the story is mostly told via cryptic text), you spend most of your time exploring Theseus and collecting encryption orbs in an effort to access gated areas and eventually escape. If you find one puzzle particularly confounding, another option is typically available. On many occasions, I found difficult puzzles more manageable when I took a break from them and came back with fresh eyes.

Every area in the game is beautiful, thanks mostly to the visuals made out of clay and found objects. Combined with haunting piano music, the aesthetic shines just as bright as the stellar gameplay. This is even more impressive when you consider that a four-man team made The Swapper.

Some of my favorite gaming experiences are those that come out of left field and completely blindside me. I love it when a big-budget, triple-A title meets high expectations, but I’m sometimes even more happy when a title I’ve never heard of blows me away. It didn’t take me long to fall in love with The Swapper; it continuously surprised and impressed me from its intriguing first moments to its fantastic ending.

Want to see The Swapper in action? Check out our recent episode of Test Chamber that covers the game.

9.25
About Game Informer's review system
Concept
Escape a doomed space station using nothing but a swapper gun and your wits
Graphics
Found objects and clay models make for one of the most unique 2D visual styles I’ve seen
Sound
Sparse, sad piano music adds to the dense atmosphere
Playability
A wide variety of puzzles can be solved with just a few basic keyboard commands
Entertainment
Don’t let its familiar perspective fool you, as The Swapper’s gameplay is entirely unique
Replay
Moderate 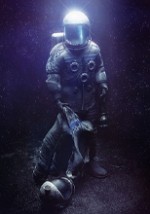