Both of the previous Sims games received pet-related installments, and now the inevitable has arrived for The Sims 3. The new content includes dozens of breeds of dogs and cats, as well as the ability to control the pets directly. The additions give a little more dimension to your neighborhood, but The Sims 3: Pets on consoles isn’t quite a fan’s best friend.

One of the primary appeals of Sims expansion packs is that their effects are cumulative. When you buy a new add-on, the world of your sims grows a little bit and you have access to the full spectrum of items and features. That’s how the series has worked on PC for years, but on PS3 and 360, Pets isn’t an expansion. It’s a standalone game. That’s good news for people who haven’t played The Sims 3 on console yet, but terrible news for those who have. The Sims 3 Pets doesn’t work with your previous Sims 3 saves, so you aren’t just adding pets to the lives of your sims. You’re starting over.

If you’re fine with a fresh start, you’ll find all of the mechanics that distinguished the console iterations of The Sims 3 intact. The karma powers are a hilarious way to mess with the lives of your sims, and the challenges give players a nudge toward some cool rewards without making them follow a linear storyline. The console version is still technologically inferior to the PC (I had a lot of chugging and slowdown when running a six-sim household), but it’s better than nothing for Sims enthusiasts without a computer.

Pets adds more powers and challenges, many centered on the four-legged inhabitants of the world. While that gives you a few new activities to explore, the real draw of this installment is being able to create and control your own cats and dogs. The attention to detail is impressive; an array of breeds and customization options will satisfy animal lovers, allowing them to craft an army of adorable pets. Once you’ve created them, the pets join your sims as full-fledged members of the household.

If you’re more interested in new gameplay than creating a realistic replica of your beloved family pet, don’t get your hopes up. The cats and dogs aren’t as complex as regular sims, and don’t offer the same kind of engaging options. Even though they have their own traits and wishes to fulfill, pets only have one skill to advance (digging for dogs, hunting for cats), and the ways they interact with each other and with people is pared down.

Even though the pet-related content didn’t blow me away, the saving grace of The Sims 3: Pets is that the game underneath it is still solid. All of the fun of The Sims 3 is still here – it just has an extra lackluster layer of stuff. You don’t have to create a pet if you don’t want to; you can just make regular loser and guide them through everyday life. The humor and freedom that defines the series remains intact. The interface isn’t perfect, but the functionality is impressive considering how much information you need to sift through using just a controller.

For gamers who just want a chance to make their own pretty kitty and then watch it scratch up the furniture, The Sims 3 Pets delivers. If you want a Sims experience that builds on previous installments, incorporates your progress from The Sims 3, and actually makes your simulated world more interesting…well, better luck next time.

The Edge
The Xbox 360 version supports Kinect by allowing voice commands, but they are largely useless and often annoying. You can only issue certain commands by voice, and when you do, you don’t have any control over the specifics. For instance, if you’re controlling a cat and you say, “Go to the bathroom,” you don’t get any input on where the business goes down. The cat might pee in its litterbox, outside on the grass, or inside on the carpet. The voice detection works fine, but the lack of control made me avoid all voice commands except for the ones that switch between sims – and that feat is just as easily accomplished with the press of a button.
Off
On
Off 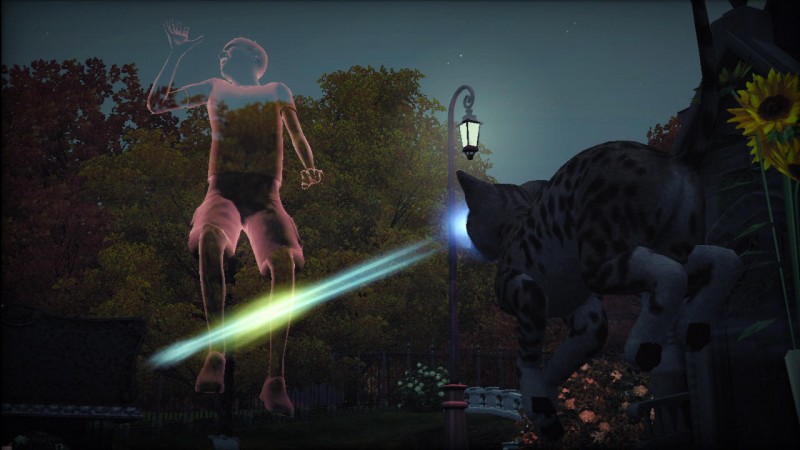 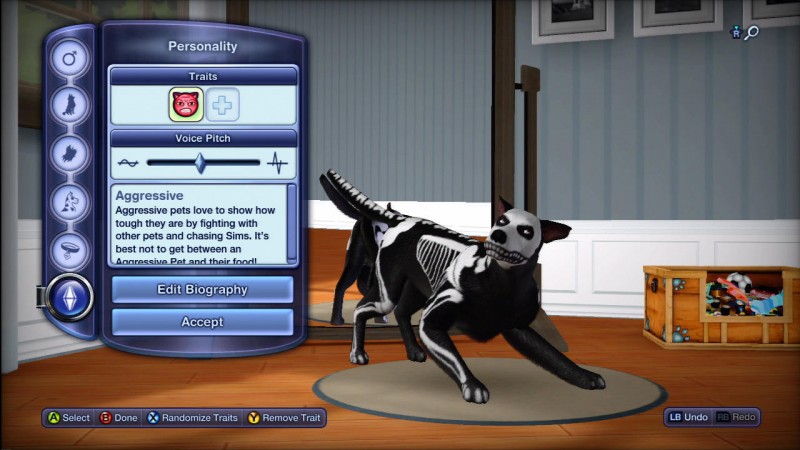 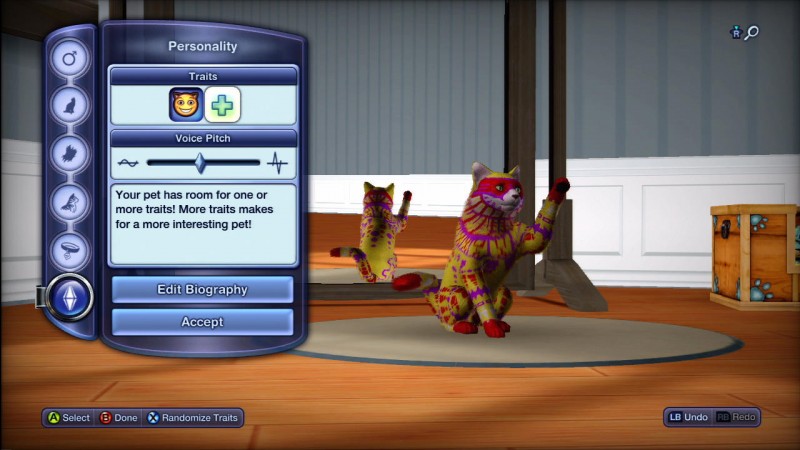 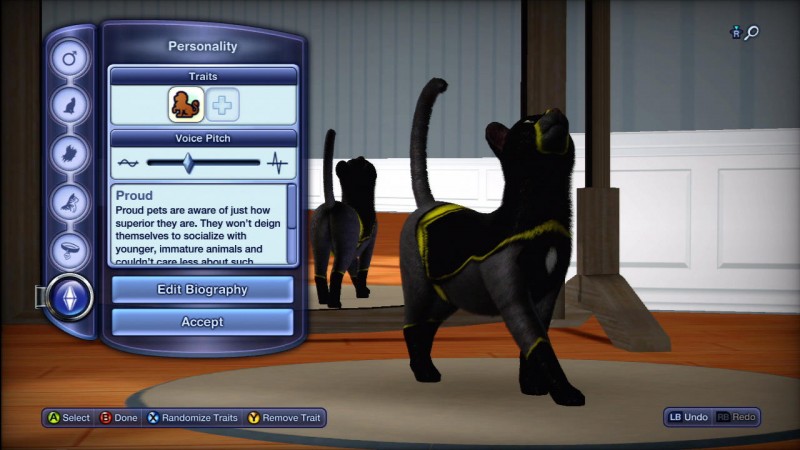 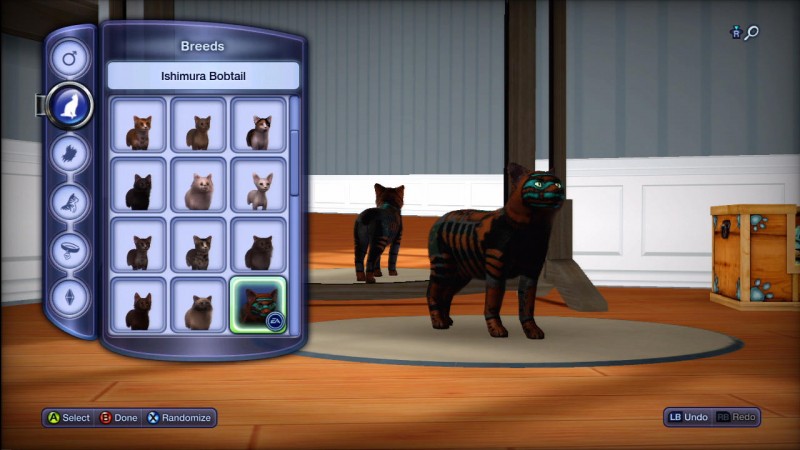 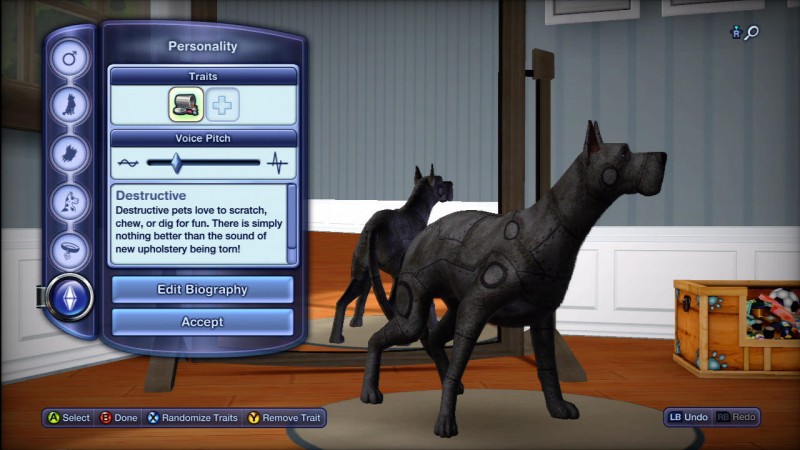 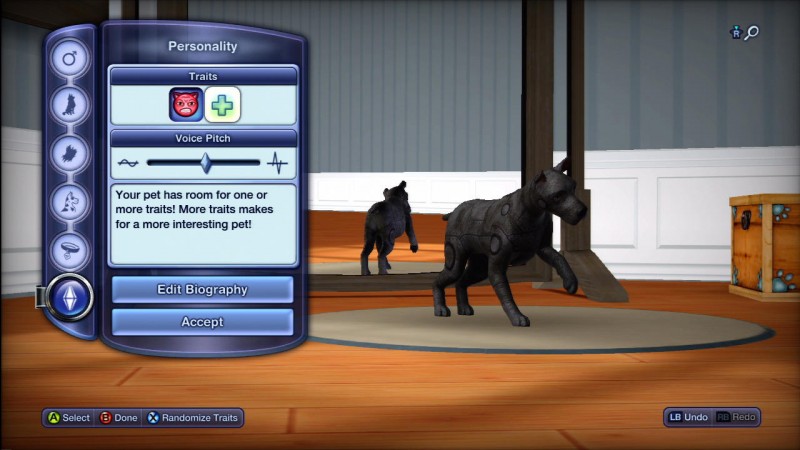 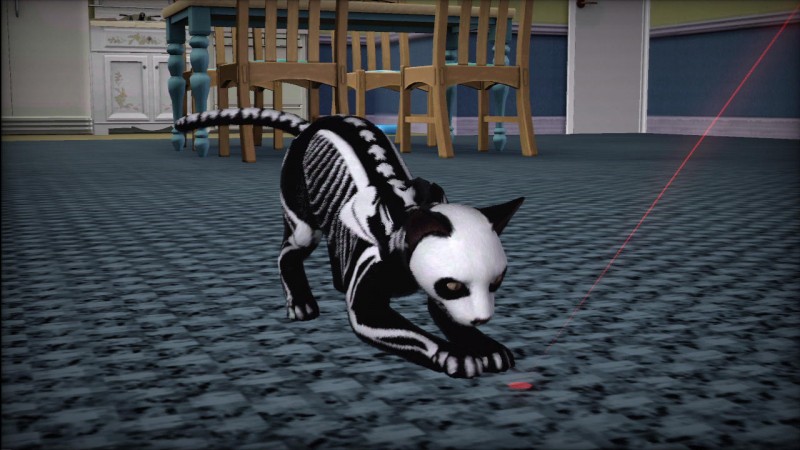 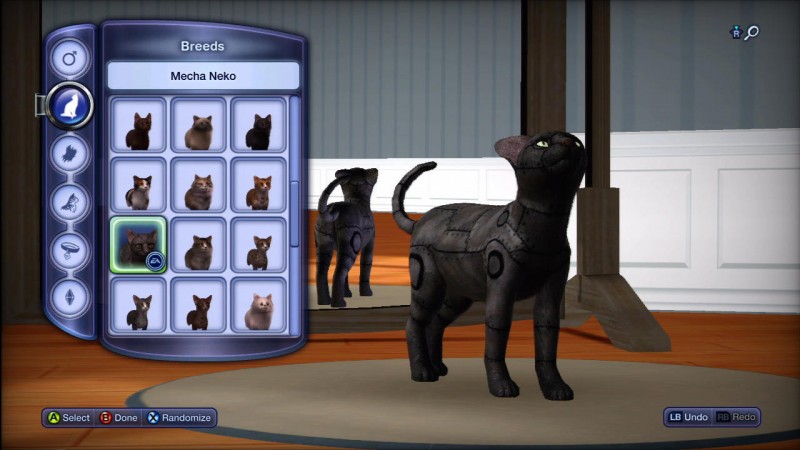 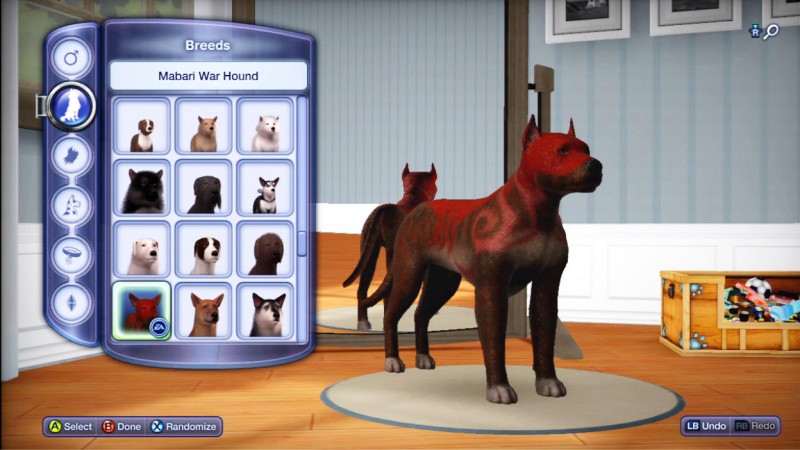 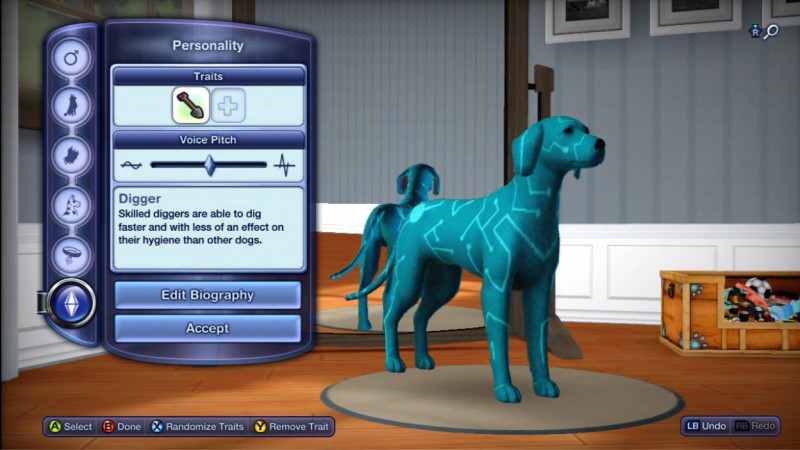 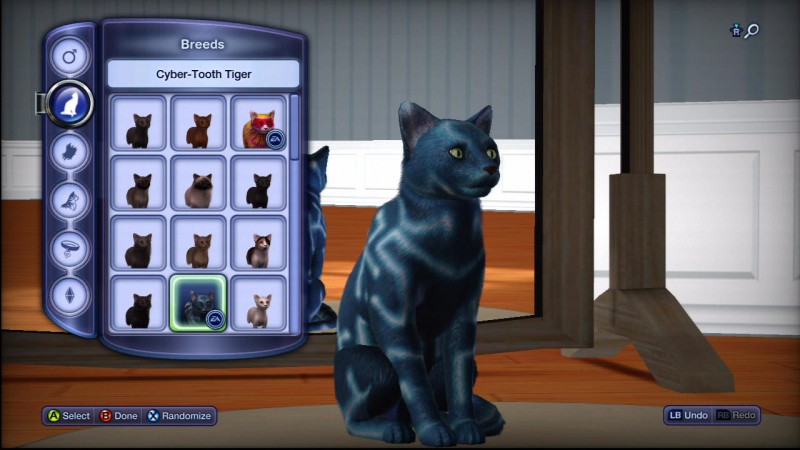 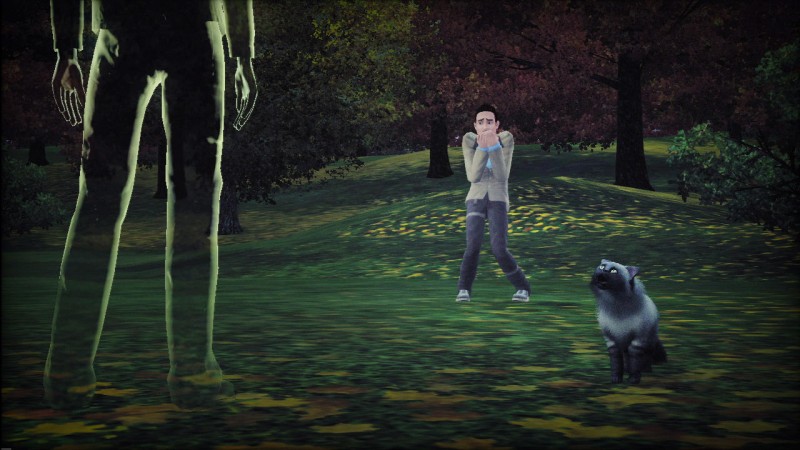 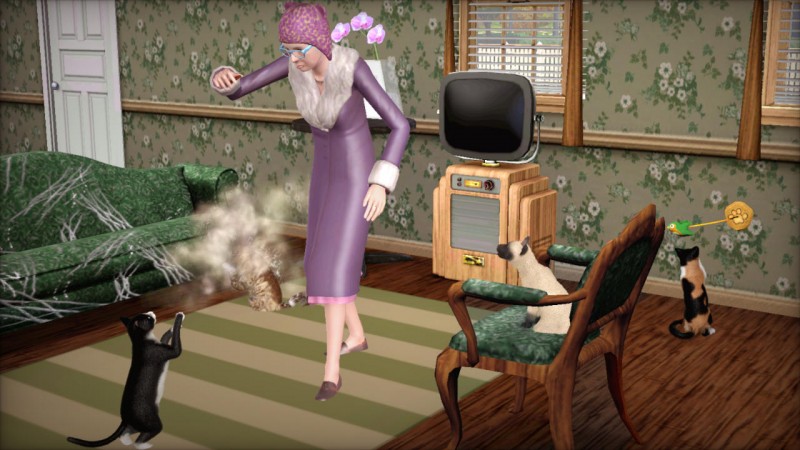 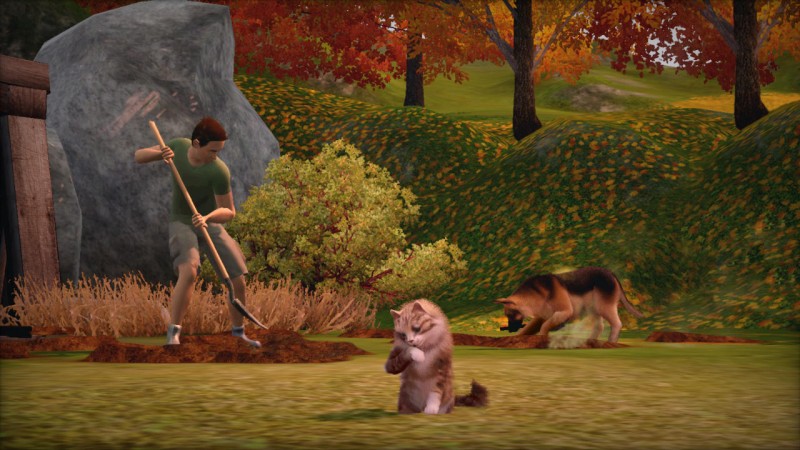 7.5
About Game Informer's review system
Concept
Give your sims pets…again. At least you can control them this time
Graphics
I encountered plenty of slowdown and texture popping, but the level of detail on the pets is impressive
Sound
The extra “meows” and “woofs” mix right in with the classic Sims-style soundtrack
Playability
The controls work fine, though they are cumbersome compared to the PC interface (especially the camera)
Entertainment
If you have an unconditional love of animals – no matter where they pee or what games they appear in – then you’ll have fun
Replay
Moderate 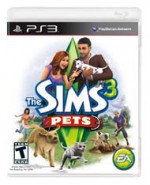