If you are the kind of person who has trouble choosing a career, The Sims 3: Ambitions might cause you a small panic attack. Not only does it add five new career paths to the base game, but after following your sims to work and experiencing all the hijinks they get into while on the clock, you might never want to get a real job.

Just like the original Sims turned everyday life into a joyous waste of time, Ambitions makes work a fruitful experience in play. The expansion helped me confirm my childhood suspicions that firefighters have the coolest job in the world (next to Top Gun's fighter pilots). The game’s firehouse is filled with so many cool things to explore that I pretty much moved in. Seriously, I don’t think I went home my first week on the job – now that’s dedication.

Likewise, being a ghost hunter has its own charms, such as wearing an outfit that is as close to a Ghostbuster uniform as possible without inviting lawsuits. You can also raid your neighbor's fridge as a reward for a successful exorcism. Unfortunately, hunting down ghosts gets old quickly, because you just repeat the same drill over and over using the series' familiar point-and-click mechanics.

This is ultimately Ambition’s greatest flaw. The jobs don’t offer anything new. Being a stylist means you just give sims makeovers using the game’s character creator. Being a design contractor has you entering the standard buy mode to spice up a sim's apartment with better furniture. In fact, my least favorite part of being a firefighter was fighting fires; I just liked living in the firehouse (and telling sims I was a fireman didn’t hurt my chances with the opposite sex...no joke).

Yes, this does what an expansion pack is supposed to; Ambitions adds new household items for your sims to play with. Are a handful of new toys and a few jobs you'll get tired of really worth $40? I’m not sure there is enough content here to appease all but the most diehard Sims fans. After what I thought was a pretty good add-on in World Adventures, this second Sims 3 expansion just feels uninspired and lacking.

7.75
About Game Informer's review system
Concept
For years The Sims has always been a release people sought after they got off work; now you can relax while you pretend to work
Graphics
Exactly what we experienced in Sims 3, but the exagerated animations of these automatons still make me laugh
Sound
More of the same; this has always been the perfect game to play while blasting your own tunes
Playability
The jobs in Ambitions make the work week fly by in a blink
Entertainment
You’re basically doing a lot of the same stuff that you do in your sim home; this won’t fundamentally change how you play the game
Replay
Moderate 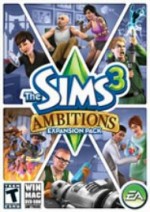