Light gun shooters are one of the few genres that you can still find in America’s dwindling arcades. That isn’t a coincidence; they sport a time-tested formula of mindless, nonstop action for you and a friend. Thanks to Sony’s new hardware, The Shoot provides crisp HD visuals and impressively accurate gunplay, but misguided design makes this rail shooter far less entertaining than it could be.

The Shoot offers a decent amount of content for light gun fans, with five different movie-themed levels, each comprised of four different scenes. The set pieces offer a lot of variety; you’ll shoot up western saloons, scour the seabed for buried treasure, and behead zombies in a haunted house. Unfortunately, the enemies offer less variety. Whether you’re shooting robots, mobsters, bats, or zombies, you perform the same actions again and again, including dodging projectiles, waiting for shields to deplete, and finishing every boss battle with a quick draw. You have a few special abilities at your disposal, but they require convoluted actions to activate, including spinning in a circle or shooting at the floor or ceiling. Not only do they momentarily screw up your calibration, but they also make the game difficult to play on your couch. Maybe I’m just lazy, but I don’t want to stand for hours on end just to shoot up a screen full of bad guys.

Most of The Shoot’s problems revolve around its movie set premise. Unlike every other light gun game on the market, you’re not actually partaking in an adventure, but merely recreating shootouts for an ornery director, who constantly barks complaints and praise at you, both of which are equally annoying. If you get shot too many times, the scene is unusable and you need to use one of your continues.

The levels are full of explosions, and many of the environmental objects shatter into pieces when you shoot them, which is always satisfying. Unfortunately, the characters don’t fare as well. Instead of being animated 3D models, all of your enemies and hapless civilians are cardboard cutouts hanging from wires. This decision no doubt won The Shoot its E rating, but as I played through the levels I couldn’t help but feel I’d be having more fun if I was shooting actual robot and zombie characters, instead of 2D imitations.

The biggest problem with The Shoot is its archaic unlocking scheme. Instead of allowing players to pick which level they want to play, you must unlock each set in a specific order. Beating each level is not enough; you have to attain an increasingly high score (which isn’t cumulative), forcing you to play the same four scenes multiple times before reaching your goal and moving on. This mechanic is completely unnecessary considering the game already contains a fail/continue system. Being constantly told by the director that my performance is “the dawning of awesome,” only to miss the high score and have to replay the whole scene again is incredibly frustrating. As if that isn’t bad enough, attaining this high score also unlocks Score Attack mode, which is the only way to play co-op. By the time your friend can even join in on the fun, you will have already pretty much mastered all of the game’s content. Anyone who has ever played a light gun shooter knows that it’s more fun with a friend, so why not allow it from the beginning?

I enjoyed The Shoot’s accurate aiming controls and the variety found in each level’s special effects and destructible environments.  I can even live with having to shoot lame cardboard cutouts instead of real enemies, and the morbidly obese director insulting my performance every five seconds. The fact that you have to post annoyingly high scores just to unlock the next level or play with a friend, however, is unforgivable. 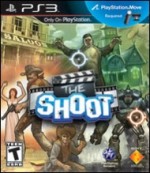 Thanks to Sony’s new hardware, The Shoot provides crisp HD visuals and
impressively accurate gunplay, but misguided design makes this rail
shooter far less entertaining than it could be.

Purchase More Info
6
i
Game Informer's Review System
Concept Create a family-friendly rail shooter for PlayStation Move
Graphics Surpasses Wii shooters with HD visuals, but the cardboard cutout enemies are pretty lame
Sound The soundtrack is great, but the director’s annoying voiceover will make you wish he was your main target
Playability Move proves to be an accurate light gun replacement even during the most frantic shootouts
Entertainment he action is solid, but the movie set premise and system for unlocking new levels hamper the fun
Replay Moderate