The original The Room is still one of my favorite iOS puzzle games. A haunting experience, the game perfectly captures an early 20th century horror vibe, even though you spend most of your time solving puzzles. However, I always wondered why the game was called The Room and not The Box, since you spend the entire game focused on a puzzle chest at the center of an otherwise nondescript room. The moniker makes a lot more sense with the sequel, which widens the player’s perspective and asks them to explore a series of rooms filled with oddities. Thankfully, the series’ haunting atmosphere and clever puzzles haven't changed much.

The Room was about manipulating objects in a virtual environment and digging ever deeper into the secrets of a mysterious chest. In The Room Two, you still solve puzzles and find hidden compartments, but the objects you play with are more varied. Instead of prying apart one big box, you explore various objects inside entire rooms – slowly pulling apart model boats, piecing together ancient typewriters, and deciphering riddles using Tarot cards. A touchscreen interface only gives you so many ways to spin, twist, or pull a virtual object, but Fireproof Games does an incredible job making these puzzles unique and interesting. Even after learning all of the first game's tricks, I thought that I might grow tired of more of the same, but The Room Two isn't easy to put down.

Part of the lasting appeal comes from The Room Two’s eerie ambiance. Its haunting audio makes you feel like you are not alone in your isolation; I was constantly spinning around the room looking for a ghost or some other unspeakable horror. As much as I loved the first game, I never got a clear idea why I was trying to open the puzzle box in front of me. The Room Two's story is a little more involved. You begin the game in a strange room with no clue who you are or how you got there, but as you explore your environment, you discover old notes and letters from someone named A.S., who came before you and set up these elaborate contraptions after uncovering the secrets of a strange new element called Null. I wish the story got fleshed out a little more by the end of the game, but there are still enough threads throughout the experience to keep you invested in your journey.

The iOS store houses plenty of games designed for one- or two-minute bursts; The Room Two isn't one of them. It's powerful atmosphere and involved environmental puzzles deserve your undivided focus. This sequel doesn't dramatically change the formula, but like its predecessor, you want to curl up in a dark room with this mobile title and experience all it has to offer. 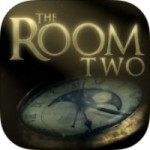 A
haunting experience, The Room Two perfectly captures an early 20th century
horror vibe, even though you spend most of your time solving puzzles.

Purchase More Info
8.25
i
Game Informer's Review System
Concept A horror and puzzle game mash-up, and the sequel to one of last year’s breakout mobile hits
Graphics Fireproof Games’ superbly detailed artifacts make The Room Two one of the best looking mobile games to date
Sound Don’t listen to anything else while playing; the eerie ambient effects draw you into the experience and create a general sense of unease
Playability The Room Two’s touch screen interface is about as simple as it gets, and the hint system nudges you in the right direction if you get stuck
Entertainment A perfectly bite-sized experience that inspires you to uncover its mysteries
Replay Moderately Low