The King of Fighters XIV Review As other fighting game series expand the genre’s territory with new single-player modes and art styles, The King of Fighters series digs its trench deeper, appealing to the interests of the hardcore fighting game fan. The King of Fighters XIV doesn’t deviate from that, and while the core three-on-three fighting allows expressive and tense matches, it doesn’t give new players a good enough reason to jump in.

The King of Fighters XIV falls somewhere between the no-nonsense technicality of Virtua Fighter and off-the-wall bombast of Capcom’s Versus series. If you understand the basics of fighting games, you can combo just by pressing buttons and moving the stick around, but the most riveting matches happen when the technical and wacky come together in intricate combos which string together basic, special, and outlandish super moves.

This series has always been about intricacy. You only have four attack buttons to worry about, but many characters have moves requiring directional and button inputs, as well as several special and super moves. The King of Fighters XIV’s tutorial introduces you to all the maneuvers at your disposal, but it’s more of an encyclopedia than a guide to playing well. The various jumps, evasive rolls, special moves, and supers allow for a diverse array of approach angles and defensive options, but might prove daunting to learn for even long-time fighting vets.

On top of this, Max mode changes up some of the fundamentals of the series. Using up one bar of super meter, you activate the ability to use powerful EX versions of moves freely and cancel moves mid-animation to extend combos for a short time. It’s a novel way to approach combo creation, since you have to go all-in on a combo when you see the opportunity for one, but it adds a timing pressure that further complicates the fighting system.

Every fighter has its share of combos to learn, but the moves require more finesse and precision to pull off than most, which makes combos more difficult. Since consecutive hits don’t offer as diminished a return as in other fighters, combos are more essential to winning, too. The Rush combo offers new players the ability to string combos together by just mashing the light punch button. These combos don’t deal as much damage as bespoke ones, but it’s an invaluable addition for players whose combo knowledge disappears in real fights. Experienced players won’t use these much – think of them as training wheels. Unfortunately, the game doesn’t offer a step between mashing out Rush combos and learning the real deal. It’s fun to mess around with friends and see cool attacks happen, but The King of Fighters XIV isn’t flashy or rewarding enough on that level to make that enough. It rewards refined play, but doesn’t guide players toward it.

It doesn’t help that the jump to 3D models from 2D sprites is a step back aesthetically. Character models look much better in motion than in stills, but they’re a downgrade from XIII’s beautiful renditions of Terry Bogard, Joe Higashi, or King.

The game compensates for its bland look with an impressive 50-character roster, of which 18 are new. The character diversity is impressive, and makes it so that everyone can find a character they like. But it also makes the learning curve steeper, since new players have to learn more character matchups.

Most of your learning happens by diving into online matches. The online is far more playable than The King of Fighter XIII’s (I found more than my fair share of solid matches), but I still encountered slow-motion matches and disconnects, even when my opponent had a four-bar connection.

In terms of single-player offerings, The King of Fighters offers the standard arcade mode, a time trial, a survival, and trial modes. I spent most of my time in trial mode, since the combos are a fun challenge and a decent way to get to know each character better. The other modes let you test out combos in live situations, but fighting computer-controlled opponents is nowhere near as fun as fighting real people.

The King of Fighters XIV’s combo system is loose and expressive, and the character variety makes it easy to keep playing for hours. The learning curve is still a bit too steep for new players, but those who make the effort to climb it will find a fun, if unadventurous, fighter. — Suriel Vazquez 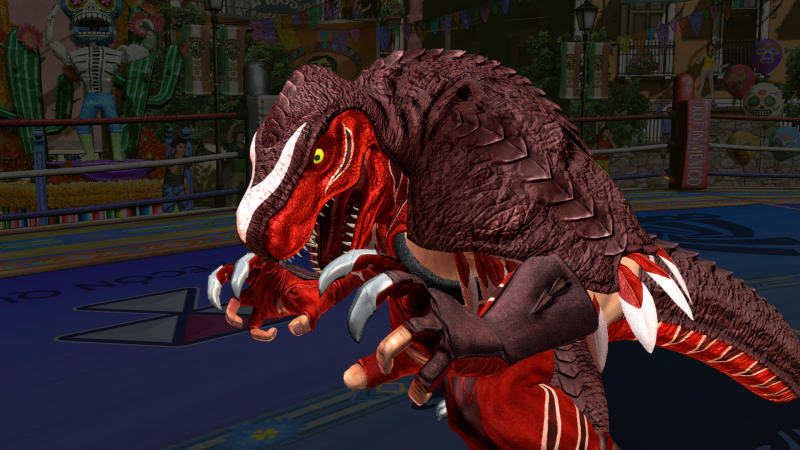 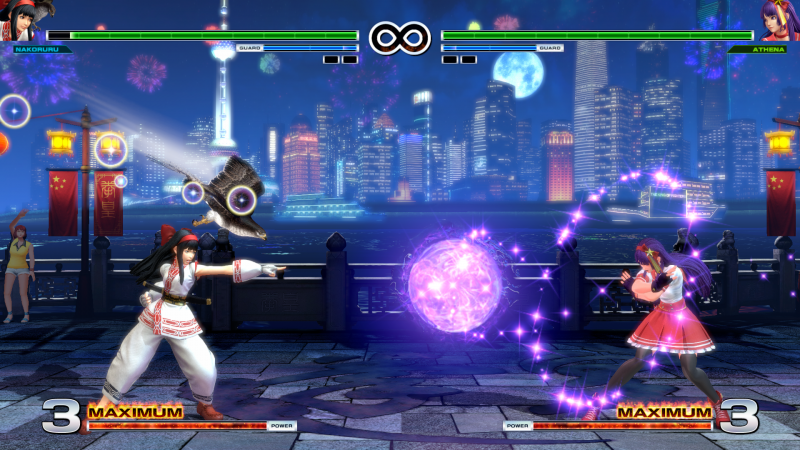 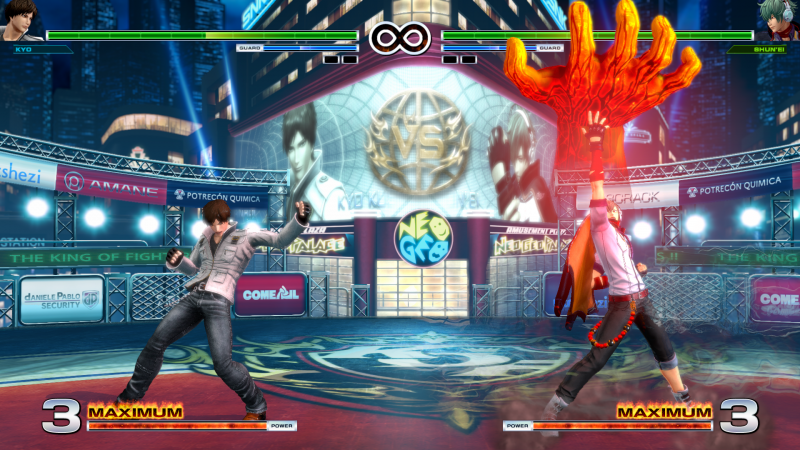 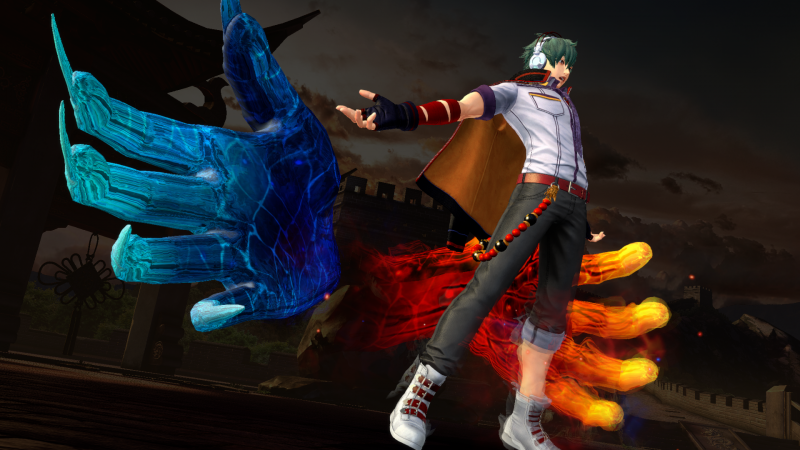 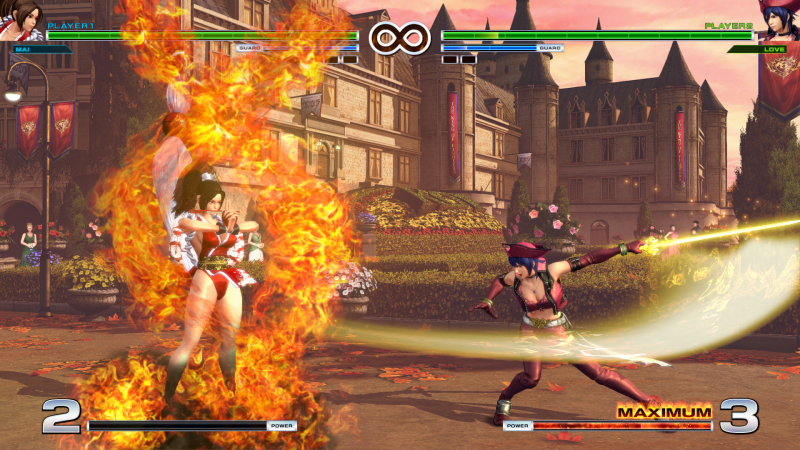 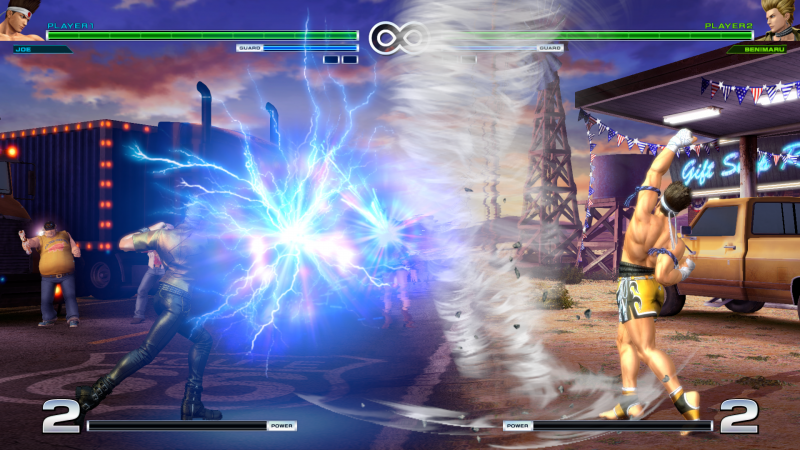 7.25
About Game Informer's review system
Concept
Take The King of Fighters XIII’s gorgeous characters and fighting system and slather them onto 3D polygons
Graphics
Fluid character animations meet character models from the fake games you see on TV shows
Sound
Decent stage themes, but the awful main menu music will be the one stuck in your head
Playability
Characters have a wide breadth of movement and combo options if you can wrap your head around them all
Entertainment
Lots of characters and online modes to tinker with, but the single-player portion feels limited
Replay
High