Roughly three hours into this Kinect-only shooter, I told myself I was going to take a break. My arms were getting tired from waving them across the screen to highlight targets, and my Xbox 360 kept reminding me that I should consider resting for a bit. My current level was going to be my last for the day, until the Gunstringer lowered his pistol in disbelief to watch a lumberjack make passionate love to an alligator. At this moment, I told myself that I would endure any amount of arm pain to see this ridiculous game through to the end.

I couldn’t tear myself away from it. Twisted Pixel Games’ unique brand of humor (read: disturbing, over-the-top, certifiably mad) is on display through most of this tale. Players step into the boots of the Gunstringer, a skeletal marionette containing the soul of a restless spirit hell-bent on exacting revenge against his former posse. With a six-shooter in hand and a ghostly being (the player) guiding his movements, he puts a bullet in everything standing between him and his vengeance, even civilians and cute animals.

In a strange twist, a theater full of people (real, living, breathing human beings) watch this journey unfold. They roar with approval when he fills an opponent with lead, and boo when he takes a bullet himself. Some of these people even interact with the game. If the Gunstringer needs assistance on the battlefield, the player can thrust his or her arm toward the ground to summon a giant Monty Python-like fist to smash his opponents. I can’t stress enough just how weird these moments are. I laughed at some of the crowd reactions, but mostly found myself wondering if the game could possibly get any stranger.

As it turns out, it does. In addition to having an audience laughing and booing, a narrator – very much in the same vein as Bastion’s excellent guide – is quick to provide color commentary. Some of my biggest laughs came from the deadpan delivery he’d give to outrageous lines of dialogue. As if I need to say it, few games have a presentation that is as bizarre and surprisingly successful as it is here.

The ‘stringer’s sharpshooter skills also impress. While most of the action can best be described as a shooting gallery on rails, platforming and evasive maneuvers add unique challenges to this familiar gaming mold. In most levels, the player is tasked to control the Gunstringer’s side-to-side movements to dodge obstacles and incoming fire with the left hand while simultaneously waving the right hand to highlight and shoot targets. Kinect handles all of these actions as well as one could hope. The shooting action is fast and skill-laden, and the platforming challenges, while simplistic in design, factor in lag (most jumps have long runways) and further add intensity to the mix.

Outside of the core mechanics, variety comes in the form of enjoyable flying sequences, and horrible boxing battles, which rarely break from the design of “throw a left punch. Now a right! Repeat until victory is achieved!” Each stage also ends with a boss battle that pushes the player to do something a little different.

Death rarely rears its ugly head. The Gunstringer can take plenty of bullets, and health hearts are often located around the next bend. While players can casually run through this entire game, difficulty is tied to getting gold medals on each stage. Each time the Gunstringer takes a bullet or fails to avoid an object, he loses points. If he misses a target, he may break a combo streak, resulting in a lower tally. The higher the score, the better the medal. I obtained a few gold medals, but found that the game’s best form of replay is going back through levels with Rooster Teeth’s audio commentary tracks activated. Rooster Teeth gives plenty of reason to venture back for a second time. A second player can join in on the action, too, but they merely take on the role of an additional gun. Two complete playthroughs requires roughly an eight to nine hour time investment. Achievement junkies should note that this game tosses out points whenever it can.

The Gunstringer proves that Kinect can appeal to hardcore gamers looking for fast-paced action and a great story. You won’t find animal petting, unnecessary exercising, or a blurry approximation of yourself digitized in this game. This is a classic game design that just so happens to have motion control. 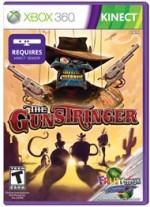 Purchase More Info
8
i
Game Informer's Review System
Concept No strings or cords are attached in this enjoyable Kinect shooting gallery
Graphics The Gunstringer’s character model is beautifully crafted, yet stands against the bland environment designs and texturing
Sound Hilarious narration joins an excellent soundtrack and a rare video game laugh track that actually fits the tone of the game
Playability All of the gameplay mechanics work well, and require speed and precision from the player. This is one of the few Kinect games I’ve played where I felt like I had full control of my character
Entertainment The game is short, but is well worth a playthrough or two for gamers looking to laugh and riddle the strangest of foes with lead
Replay Moderate