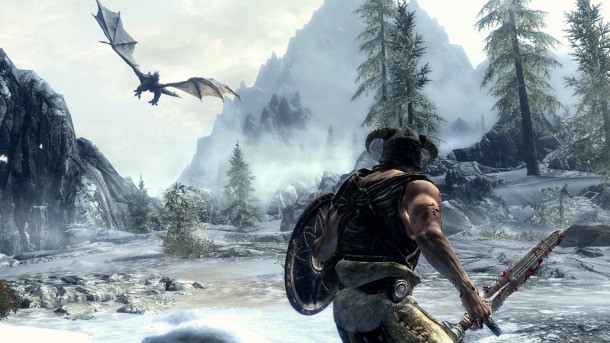 The Elder Scrolls has always had a dedicated following, but given the success of Oblivion and the expectations for its sequel, I assumed Bethesda would play it safe and deliver a slightly enhanced continuation of the franchise. Instead, I walked away feeling I had played the next evolution of the series.

I wasn’t so optimistic as the game opened. Skyrim’s story begins with a political prisoner’s beheading at a public execution. This sequence is worrisome, not because my character was the next in line to feel the axe, but due to the choppy narrative flow. The intensity that is supposed to accompany this scene is stripped away by robotic character animations, confusion over who is talking at any given point, and uncomfortable lulls in the pacing. Making this scene feel real requires just as much imagination as a Dungeons & Dragons session. Cinematic storytelling has never been Bethesda Game Studios’ strong suit, and I find it surprising that the team decided to make it such a prominent component in Skyrim’s introductory moments.

This disappointing sequence concludes with an unexpected yet praise-worthy series of events. Before my character's head was permanently separated from his body, a dragon swooped in and burned as many of the poorly established characters as it could. This awesome moment transitions to an escape sequence that plays out similarly to a Call of Duty “follow” mission. As I ran in the opposite direction of the thrashing beast, it smashed through walls in pursuit, implying that I was the target all along. Again, this exacting approach seems out of place in an open world Bethesda production, but it ends up being a great transition that sets up the true heart of this adventure. After its rocky first steps, Skyrim’s story and gameplay find their stride.

From the moment the attack subsided and my character emerged safely onto Skyrim’s mountainous terrain, I found myself in awe of the world around me. All of Bethesda's releases this generation have given me that “I’m not in Kansas anymore” feeling once the open world is revealed, but not to the degree that Skyrim does. This world has that Rapture or Arkham Asylum allure, and is as much of a star of this adventure as any of the characters, dragons, or gameplay. 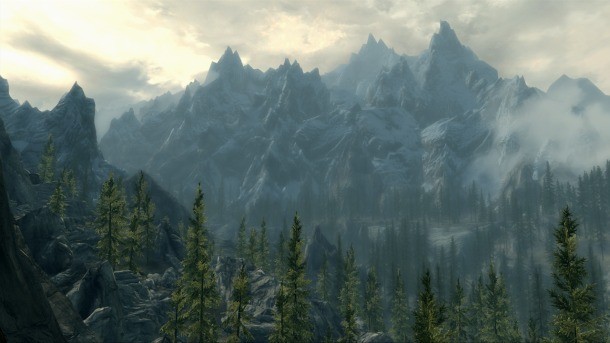 While Skyrim's landscape doesn’t have the fantastical elements of the aforementioned places, excitement and a true sense of discovery are tied to the secrets hidden within. I climbed a mountain to find a long-forgotten tomb, crossed a frozen tundra in search of powerful masked adversaries linked to one of this world’s greatest mysteries, and found myself riding my steed with haste toward a village under dragon attack. Much of the content the world offers is worth devoting time to, whether that leads to an enchanted sword or a settlement filled with side quests.

The frequency with which you obtain new quests is astounding. At one point, I had 14 main quests and 32 miscellaneous quests active at once. This huge list turned me into an antisocial outcast; I stopped approaching other characters for fear of getting more quests from them. Even this strategy wouldn't work, as messengers would hand me documents containing new quests, and some NPCs rewarded jobs well done with additional tasks. After completing the narrative quest and logging over 100 hours into the game, I still found myself overwhelmed by the amount of uncompleted quests, NPCs I neglected to talk to, and areas of the map that I hadn’t visited yet.

A story thread accompanies almost every quest. Some of these tales tie into the main conflict at hand (your character is the “Chosen One” tasked with cleansing the kingdom of dragons), while other side stories stand on their own or flesh out the world history. In a way, the game feels like a gigantic collection of short stories. The main campaign is superbly penned and is Bethesda's best effort to date. All of the scenes involving the greybeards are fantastic. I also thoroughly enjoyed Skyrim’s take on the Dark Brotherhood, and I got a big kick out of being a part of the Bard's Guild (my evil character had music in his heart all along). Even the books scattered across the kingdom, of which there are a dizzying amount, have great tales to tell.

Most of these story threads took me to new places on the map. Oblivion was knocked for its lack of variety in its dungeon designs. This isn't the case with Skyrim. Yes, there are repeated textures and rock formations, but the composition of each dungeon is largely unique and individualized – in some cases with one-off Indiana Jones-like puzzles or traps. The dungeon designs also factor in player convenience with easily accessible exits. That's right, you no longer have to endure extensive backtracking to return to the overworld.

I planned to create a tank character who relied on a sword and shield combination, but quickly became addicted to the brilliantly designed spell casting. It empowered me with the feeling that I was a medieval Emperor Palpatine, capable of decimating foes by blasting fire and electricity simultaneously out of two outstretched hands. 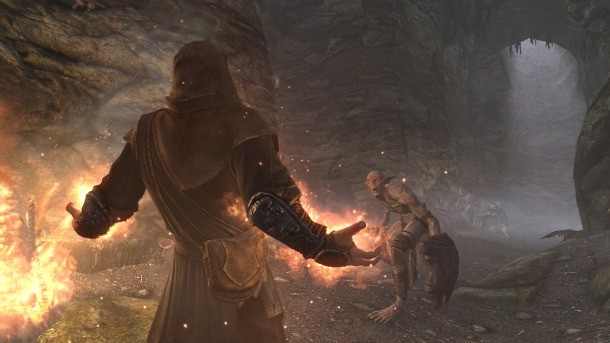 Since your character is Dragonborn (“Dovakiin” in the game’s ancient dragon language), he or she can also bellow powerful magic-like shouts. The fact that the simple act of yelling can engulf a handful of enemies in deadly flames is hilarious, bad ass, and an amazing new power added to the Elder Scrolls mix.

The variety of spells and shouts is extensive and fun to experiment with (try rocking fire, ice and electricity at the same time). I also found myself experimenting more with my skill types than I have in any other Elder Scrolls game, thanks to the rewarding new perk system.

All of the game's spell and weapon management is handled exceptionally well through a streamlined menu system that is the most user-friendly solution I’ve seen in an RPG. Any spell or weapon can be added to a favorites list and magic weapons can be recharged with soul gems with just a few button clicks. I wish inventory management were handled better in a broad sense, since I had to spend too much time finding vendors who would accept certain items and have the adequate funds to buy them. Not being able to sort items in the chest is also a time-consuming pain. 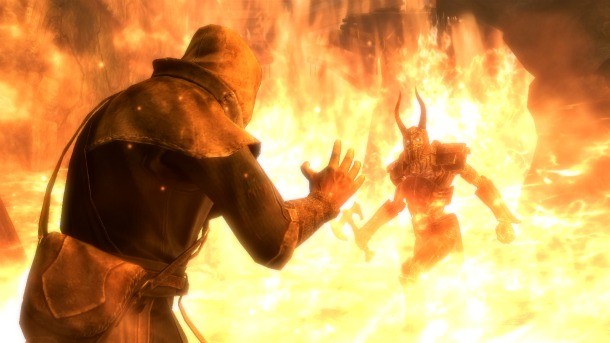 Combat showcases just as much improvement as the spell functionality. In Oblivion, I exploited enemy AI by backpedaling and firing spells as foes haplessly tried to reach me. This tactic no longer works in Skyrim. Enemies on the offensive move faster than your backpedaling character. While their pathfinding can still be exploited in certain situations – such as an enemy being unable to navigate a table successfully – combat is largely a test of skill. Every facet of the combat system works well. Swords clang violently, shields are the lifesavers they should be, and thanks to your ability to multitask, healing spells can be cast at the same time as striking.

As terrifying as it is to see a dragon rain fire down on people fighting to save their homes and families, early fights with these beasts don’t pack much excitement or challenge. Despite their menacing appearance, dragons don’t have much defense for sword or spell strikes to the leg or wing. These flying pigs are easy to cheese...early on. More powerful dragon types come into play as the game goes on, even after the critical path's conclusion.

The biggest problem Skyrim runs into has plagued every Bethesda-developed game I’ve played: It’s buggy. Not to the degree that Oblivion was – Bethesda makes headway in delivering a more stable product, but I ran into numerous bugs that forced me to reload previous saves. The auto-save system charts several recent points, which can be a relief, but losing progress is annoying and can erase significant victories and character development. If you play the game for dozens of hours, you’ll likely run into setbacks like these a few times. Some of the glitches can be quite funny. For instance, one of my followers floated behind me horizontally like Han Solo trapped in Carbonite. I also killed a dragon in one hit, yet its skeleton remained alive and invincible in the world (I named him Broken, the fearsome).

These problems, as unwanted as they are, don’t hold Skyrim back from being Bethesda Game Studios’ finest release to date. This is one of those games that I go into with a clear idea of what I want to accomplish, but somehow along the way find myself on the other side of the continent with eight hours of gameplay under my belt and no checkmarks next to my planned tasks. Skyrim ruled my life for two straight weeks, and I wouldn’t be surprised if it becomes a fixture in my gaming rotation for the remainder of the year. It's one of the biggest, most content rich games I've had the pleasure of playing. 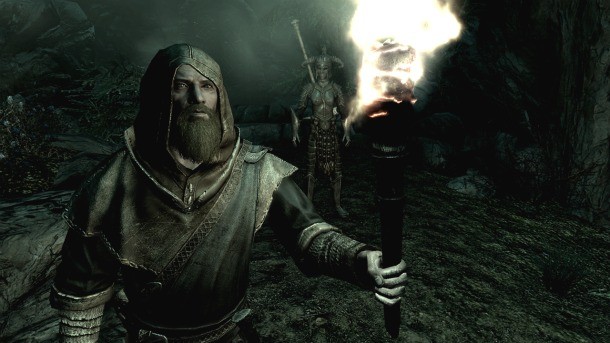 Review Stats:
I spent 11 days within the world of Skyrim. Here are a few of the stats from my playthrough:

The Ending
If you think you completed the story campaign, but the credits didn’t roll, trust your gut. Given the expansiveness of the side quests in Skyrim, Bethesda chose to throw you right back into the game world rather than force you to watch 25 minutes of credits. If you want to see who made the game, there’s an option to watch the credits in the main menu.

The PS3 and PC Versions
Bethesda Softworks did not have PlayStation 3 or PC code to send us in time for our review. Reviews for these versions will be posted in the following days.

Bethesda's long-running series returns with its best chapter yet. Be warned: We reveal minor plot spoilers.

Purchase More Info
9.5
i
Game Informer's Review System
Concept Bethesda’s long-running series returns with its best chapter yet
Graphics Everything looks great from a distance, but some textures are muddy when viewed up close. Texture pop-in also occurs frequently
Sound One of my favorite soundtracks ever. Voice acting quality is still inconsistent, but at least there are more than six people providing voices
Playability The combat and world exploration are incredibly fun. The streamlined menu and favorites systems works like a charm
Entertainment You can easily sink 100 hours into this game and still find yourself overwhelmed by the amount of content remaining
Replay High