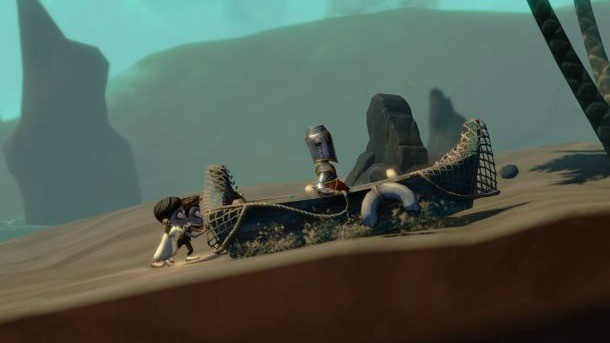 Ron Gilbert’s return to adventure games has been widely anticipated, and as his first co-venture with Double Fine, The Cave represents an amalgam of new and old. The twisted humor and inventive puzzles that define classic Gilbert-authored adventure games like The Secret of Monkey Island and Maniac Mansion are in full effect. However, the new 2D presentation streamlines play, and the absence of an inventory demands logical choices in your approach to solutions. The creepy characters and varied locales hidden away inside the cave make for a fun adventure, but the whole affair is hampered by confusing level layouts and the need for backtracking, making this a game squarely targeted at the more patient among us.

The Cave’s greatest strength is its characters, and the way those individuals inform the game. Any single playthrough involves only three of the seven available protagonists. Each character has a unique special ability, but the more significant effect of your choice is the paths it opens. Half of each playthrough is set in character-specific locations that can only be breached by the connected adventurer. If you want to visit all of the cave’s locations, you will need to play through a few times.

The voice of the cave itself narrates your journey – a not-so-subtle malevolent presence that draws unfortunate souls into its depths. The hidden nooks and crannies contain all sorts of surprises, from a lost Egyptian pyramid to an attraction-filled carnival. Each environment introduces a new linked set of puzzles, all of which lead to a subversive and twisted story payoff – often to further our understanding of the adventurers.

Puzzle design is varied and often fascinating, demanding careful observation of the environment for clues on how to proceed. The Monk’s meditative trials task players to think like a Zen master. The Time Traveler’s challenging scenario forces players to alter small details in an environment millions of years ago to get a different result in the far future. When the solutions to these puzzles click, the game nails the thrill of old-school adventure gaming.

Even so, frustrations abound as you explore the twisting corridors. It’s easy to get lost in any given section, as similar-looking chambers and branching turns meld together in the mind. Items you need for a puzzle are often several minutes away, and that presumes you wrap your head around the solution the first time you pass the requisite bucket, barbell, or bone. Backtracking is tiresome, and the absence of any quick travel system further slows things down. That’s especially true as you navigate each of your three characters into the spots they need to stand to solve a particular challenge, often running each down the same paths to reach something like a weight-sensitive pressure plate. The lack of an inventory forces you to think critically about which single item to carry, but it also means if you pick up the wrong item you’re running back to get the right one. Fans of old-school adventure games won’t balk at the irksome runaround, but The Cave misses its mark in eliminating the pacing problems that characterize those earlier classics.

At least you don’t have to solve solo; The Cave supports up to three players working together on a single TV, but falls short of letting players split up, so you still have to switch back and forth as puzzles demand characters in different locations. Still, that cooperative vibe echoes the way many players first encountered the genre – a group of friends gathered around a screen, laughing at the crazy solutions required to slip past a perplexing blocked path. In replicating that novel experience, The Cave succeeds. 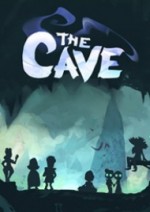 Ron Gilbert's return to adventure games is filled with twisted characters and clever puzzles, but the game is not without its flaws.