The Castle Doctrine is a curious MMO with roguelike elements. To some, it may seem brutally unfair and punishing. To others, it may be exactly the kind of competitive experience they have always wanted. Players must protect their own assets while attempting to steal from others to survive and thrive; it feels like a darker player-vs-player version of 2013’s Monaco while making some grim observations about the nature of society. As a strange social experiment and multiplayer playground, The Castle Doctrine provides a genuinely interesting experience for those willing to look past the shoestring interface and visuals.

The concept is simple: You start with $2,000 to spend on various defensive and offensive tools like walls, guard dogs, traps, guns, saws, wiring, wire cutters, crowbars, and more. You create a lethal maze to protect your family and safe from other players who invade your home. You have to navigate your own death trap before moving on, so it must be possible to complete. There is an interesting assortment of items to pick from and combine, and players that enjoy “mazing” and tower/dungeon building games should find construction of the perfect death house enjoyable. With your home protected, you spend the leftover cash on tools to assist with breaking into your opponents’ houses.

Death is permanent. Once your character dies – which can happen as a result of a botched robbery or by being out of resources and committing suicide – you respawn with a fresh character, family, and $2,000. This concept of permadeath makes each and every choice have considerable weight, and that weight only gets heavier as you accumulate wealth and growth during a character’s life. The longer you last, the more agonizing the inevitable death becomes. On each attempt, you have the option of seeking revenge; the security cam lets you check out players as they maneuver through your traps, so you can write down the names of those who succeed and deliver vengeance.

The leaderboards display the current reigning champions and the success rates of robbers attempting to break into their caches. The closer to the top you are, the bigger a target your cache is, especially for hungry thieves with little or nothing to lose. It’s probably a better choice to feed off the weak at first, and move up to the dangerous mansions after you have some practice and a robust sack of tools.

As I became hardened from each gruesome death, I was inspired by other players’ trap factories and planned new ways to get back at my own intruders. When you rob other players, you may push them to virtual suicide. It’s a good thing that the concepts are somewhat removed from reality via heavily pixelated graphics, because this game is incredibly dark. Will you become wealthy and powerful on the corpses of fallen victims? Will you seethe in silence planning the ruin of Jordan Michael Roberts or Hector John Herbert? Will you stop playing after losing everything?

The Castle Doctrine is a player-driven PvP paradise of well-laid traps, vengeful voyeurs, and desperate thieves. The presentation and traditional aspects like graphics, sound, and interface are rough around the edges, and it isn’t deep enough to stay interesting for long. Even so, The Castle Doctrine is an intriguing diversion from uninspired copycats and clones that often plague the industry. It won’t suit everyone, but I applaud its creativity. 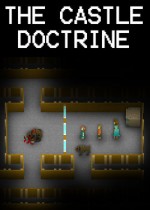 The Castle Doctrine is brutally unfair and punishing, but for some it may be exactly the kind of competitive experience they've always wanted.

Purchase More Info
7
i
Game Informer's Review System
Concept Protect your family, rob your neighbors, and watch everything go down on security cameras. Your home is your castle, and you protect it at all costs from other players
Graphics The pixelated simplicity is an interesting way to present some dire situations and grim consequences
Sound You’ll probably shut the music off after a few minutes
Playability The controls are simple and easy to learn
Entertainment This is definitely a niche title, but those looking for something well off the beaten path won’t be disappointed
Replay High