The Binding of Isaac Review If you told me that the artist half of the Super Meat Boy team was going to make an indie roguelike/twin-stick shooter/Bible satire/Legend of Zelda-style dungeon crawler, I’d probably have pictured something very much like The Binding of Isaac. It wouldn’t be as cool, because I’m not half as creative as Edmund McMillen and co-creator Florian Himsl, but that bizarre mashup of incongruous concepts is a perfect description of this unusual game. The execution is far from flawless, but the $5 price of entry is easily worth it for this trippy peek inside McMullen’s psyche.

There’s no easy way to say this: The Binding of Isaac has you murdering your way through a randomized series of brutally challenging top-down rooms, using the tears of the crying child you’re controlling as a weapon, on your way to kill your mother, who was told to kill you by God to prove her faith. You’ll encounter an unfortunate amount of poop and pee along the way. You might find the special Mom’s Bra (or, heaven forfend, Mom’s Pad [yes, it’s what you think it is]) item. You’ll almost certainly die a dozen or more times and have to start over from the beginning before you beat the game, and that’s just the first step toward unlocking everything The Binding of Isaac has to offer.

Most games have an art style easy to sum up and write off in a sentence or two at most. The Binding of Isaac, like McMillen’s other work, is like if you loaded Ren & Stimpy into a cannon and fired it point-blank into a Miyazaki film like Spirited Away. Or took Aqua Team Hunger Force and beat up Bomberman with it. Or rolled out 8-bit Zelda and sprinkled Reddit all over it. The visuals are hardly happy or inviting, but the unique look is oddly compelling even when you’re vaguely disturbed by wildly shooting blood out of a demon-horned child’s eyes at a constantly pooping white worm. Most of the game is randomized within a few constraints. Each dungeon floor has a boss and a treasure, but beyond that you could run into just about anything. Shops, arcades, minibosses, and secret rooms are sprinkled in between the usual flow of monster arenas. This may look a lot like The Legend of Zelda, but there are no puzzles and you generally have to kill everything in the room for the doors to unlock.

This randomization is most apparent in the different treasures and upgrades you come across in a given playthrough, which typically runs between five and thirty minutes. You’ll have awesome games where you get some combination of bonus damage, rate of fire, and range that lets you merrily blast your way through almost anything. Other playthroughs will give you three items in a row (of which you can carry only one), and the best of them will be a 10-second limited invulnerability – meanwhile, you’re trying to clear roomfuls of monsters with the crappy basic attack. I enjoy being made to play the hand I’m dealt within reason, and at least when the random generation screws a game over I’m only out 10 minutes or so. Plus, the huge variety of dungeon levels and floor bosses makes every game a journey of wondrous (gross) discovery.

You’ll start seeing the same room again after a few hours with the game, but even a dozen hours in you should be encountering new content as often as not. Even if it’s a room you’ve played before, it’s likely a brand new challenge because you’re probably coming in with a dramatically different set of abilities and upgrades. Monsters do everything from chase you tirelessly, blow up into other monsters or explosives on death, split into new monsters, regenerate from stubs unless you finish them off, shoot random or aimed projectiles, spawn new mobs, and much more. The particular danger you face at any given moment is the result of a dozen variables, and coming up with a strategy on the fly (and executing it with twitch skill) never gets old. It does get easier with time and experience, but you’ll still die regularly unless you’re some kind of top-down shooter savant even after you’ve seen most of the content. Most of your deaths will be deserved. You didn’t dodge well enough. You should have used some of your consumables to take out a challenging room rather than losing half your health right before a boss fight. You traded max health for extra lives (never do this, by the way). You squandered your money on bonus health instead of saving it for permanent upgrades. You died with a fat wallet after not buying a health refill. Going to zero life is always what kills you, but there are a shocking number of ways to reach that state.

Some of your deaths will be the game’s fault. Too many objects onscreen caused enough slowdown or input lag no matter how powerful your machine is. You alt-tabbed (don’t alt-tab, ever, by the way). The random dungeon refused to give you any health pickups, or you got crap upgrades that weren’t compatible or just sucked. Maybe the game just crashed, like it does sometimes.

The technical issues range from annoying (taking a few hits you shouldn’t have because of lag or slowdown) to frustrating (a new character not unlocking when it should) to rage-inducing (your entire save not persisting between sessions). I didn’t personally progress much past annoyed, but the reports of issues from players online are widespread enough that you should be aware before you buy the game. At least McMillen seems to be patching with a quickness, so hopefully these concerns will be addressed in the coming weeks and months.

The Binding of Isaac is an exceptionally weird game with a list of caveats longer than I’d like, but when McMillen’s vision shines through, it’s as compulsory of an indie title as Castle Crashers or Everyday Shooter. Even if you get bitten by a save or achievement bug, I have a hard time believing you’ll regret dropping five bucks here.

8
About Game Informer's review system
Concept
It’s a twin-stick shooter. It’s also a roguelike, and a satire of a Biblical story, and an unsettling artistic interpretation of childhood fears
Graphics
The simple style is by turns disgusting, disturbing, and beautiful
Sound
Daniel Baranowsky's alternately dreamlike and intense electronica soundtrack is the best I’ve heard since Braid
Playability
No native gamepad support is borderline unforgivable, but moving with the keyboard and shooting with the mouse is at least playable (unlike both moving and shooting with the keyboard)
Entertainment
Has its share of technical flaws and stupid deaths, but the moments where the fantastic idea in its core shines through are more than worth it
Replay
High 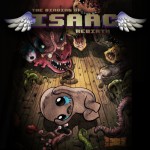 The Binding of Isaac