I wasn't a good tennis player in high school because I didn't have the mental strength necessary to succeed. Tennis demands consistency in every stroke and the ability to move on from a bad point. That becomes almost impossible in Tennis World Tour because the movement assistance often works against you, and even well-timed strokes frequently go awry. If I was on the court in real-life, I would have nobody to blame but myself – but in this case it's not my fault.

Tennis games have the complicated task of balancing the movement of your player with the timing of your racket swing. It has to look harmonious as you transition from a run animation into a swing, and it has to feel responsive as it reacts to quick volleys and changes of direction. Tennis World Tour bucks these conventions in the worst ways, automatically moving you at times away from the ball (particularly during service returns or net approaches) or sometimes not even responding to a ball well within reach.

Amusingly enough, the reverse is often also true. Balls realistically out of reach are returned due to the poor collision between the ball and your racket, making it look like the ball is being hit by an invisible force.

Phantom surprises are also in store due to the game's inability to read your shot selection and placement. Rearing back to unleash a topspin winner can inexplicably produce a weak, defensive slice. Cross-court or down-the-line shots regularly go anywhere but where you plan. Without the ability to execute a stroke strategy against your opponent, the chance for a clear-cut winner into an open court puts you on edge, filled with doubt. Even Pong had a reliability about it that this game lacks, and that was over 45 years ago.

One of the big draws of this title was its career mode, but its positives aren't enough to keep you on the tour. You have a wide array of skills to choose from, and I like that some of them only kick in at break points, and that you can change your loadout between tournament matches. I also like choosing off-the-court activities like a workout that bestows temporary monthly bonuses, but overall managing your time and fitness through the calendar system isn't deep. Training exercises take you back onto the court, which is the one place you don't want to be. Thanks to a bug, you can't even select a different coach or agent; the game just reverts back to your original staff.

As if the unfulfilling career mode wasn't enough, at launch Tennis World Tour does not have online multiplayer. Online doubles is also coming this summer as a free update.

You could reductively describe tennis as a sport where you hit the ball back and forth. That would be unfair, since it strips away the strategy and physical feats – which is exactly what Tennis World Tour does to the sport. In real-life tennis, when you're so frustrated that you yell and throw your racket like a brat, it's decorous for your opponent to ignore you and tighten the strings on their racket. At least the A.I. in this game mutely shares a sense of embarrassment, hoping that the moment passes.

4
About Game Informer's review system
Concept
A tennis title that cannot fight past its faults on or off the court
Graphics
The create-a-player faces and those for the real-life pros are fine but unremarkable
Sound
You’re going to get sick of McEnroe, and not because he’s obnoxious; his point-by-point commentary is shallow and repetitive
Playability
Shot selection and placement, as well as player movement, are not executed properly
Entertainment
Finding enjoyment is hard when even a long, dramatic rally ends in a true unforced error committed by the gameplay
Replay
Moderate 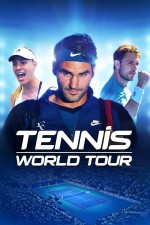