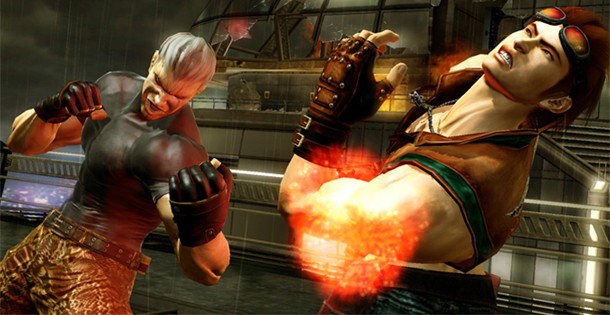 Considering the first Tekken was released soon after the PSone’s debut, and Tekken Tag Tournament accompanied the PlayStation 2 at the console’s launch, it’s surprising to see the franchise make its current-gen debut so far into the lifecycle. The wait has proved worth it, as this sixth installment is the most refined since the almost universally loved Tekken 3.

One of the first things you’ll notice is the comically huge character select screen. For the standard arcade, versus, and ghost battle modes, players have access to every fighter from the very beginning. This includes dozens of returning favorites, as well as some new faces. Apparently there’s a rule that every new fighting game has to feature a fat, surprisingly agile blonde American, as Tekken’s rotund Bob joins Street Fighter IV’s Rufus in this role. Dr. Bosconovitch’s creation Alisa appears a polite young girl at first, at least until her chainsaw arms and robot wings pop out (and it only gets worse when she pulls off her own head and uses it as a weapon).

Newcomer Lars is the focus of the new Scenario Campaign mode, which is the weakest aspect of the game. Cutscenes are surprisingly long considering they make little to no sense and feature (surprise!) a spiky-haired protagonist with a case of amnesia. This mode has its own built-in version of arcade mode, featuring CG endings for characters after a few short fights. Going back to the lazy beat ‘em-up levels of Scenario Campaign is rough after a few traditional one-on-one fights, as the colorful and interesting locales of the latter are replaced by the cut-and-paste docks and bland environments of the former.

Worst of all, your movesets are castrated in the Scenario Campaign, which is a shame considering how robust they are in standard fights. After learning their various tweaks, Tekken veterans will feel right at home with returning characters. Combat is focused on a heavy dose of combos and juggling, although it’s still entirely possible for newbies to pull out a win by frantic button mashing. Part of the fun of a fighting sequel is learning the unique styles of the new combatants, and it’ll take some time getting used to the snake-like kicks of Zafina or Miguel’s quick and powerful combos.

Online play performs relatively well compared to other fighters, but lag still rears its ugly head every once in a while. However, the lag isn’t exactly choppy; it’s more of an overall slowdown of the fights. Your inputs still register as you intend, albeit a little slower than in single-player. The overall online setup offers a few more features than Street Fighter IV’s bare-bones approach, but it’s nothing substantial. Lobbies and matches connect almost immediately, and you can even upload replays and “ghosts” of your performances for others to download.

As a fighting game, Tekken 6 proves why it’s been a consistent success for over a decade. Controls and combos are incredibly tight, and the entire package is dripping with polish. Despite the lackluster Scenario Campaign, it’s still a solid purchase for fighting fans. 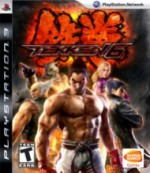 Tekken 6 proves why it’s been a consistent success for
over a decade. Controls and combos are incredibly tight, and the entire
package is dripping with polish.

Purchase More Info
8.75
i
Game Informer's Review System
Concept A new King of Iron Fist tournament featuring more combatants and polish than ever before
Graphics Most of the one-on-one stages look spectacular, and the fighters animate beautifully. The same can’t be said for Scenario Campaign’s uninspired locales
Sound Stage music doesn’t depart from the series’ previous offerings, and the voice acting is passable
Playability Extremely rewarding combat for longtime fans, but button mashing still works (to a degree) for newcomers
Entertainment The robust movesets and varied fighters help this installment live up to the franchise’s reputation
Replay Moderately High