Casual observers could be forgiven for looking at a new Tales game and saying, ''Didn't one of those games just come out?'' The answer, of course, is yes. Many of the familiar staples of storytelling and design from previous Tales games repeat again and again, rarely evolving in any meaningful direction. Depending on your perspective, Vesperia either fails to innovate or willfully embraces a popular tradition. Either way, the game is a solid and straightforward example of a beloved genre.

Visuals and sound highlight the series debut on 360. The graphics are like an anime film brought to life. The sharp, crisp lines, evocative faces, and colorful backgrounds are breathtaking. These visuals are only enhanced by the tremendous amount of spoken dialogue that flows through the game.

Combat is based strongly on earlier incarnations of the series, with a focus on simple, quick real-time fights. However, a few features make it stand out. The 3D field of battle encourages at least a modicum of strategy and movement options to avoid the most dangerous areas. The combat system evolves as the game continues, offering new ways to flesh out the action, and you can even play cooperatively with friends once a battle starts. Sadly, these features can't keep the experience from feeling too focused on button mashing. For far too long in the early hours, the combat is easy and uninteresting.

The painfully standard story is the biggest disappointment. Say what you will about keeping or throwing away old gameplay features, but decent narrative, unique characters, and a compelling plot is where RPGs should shine. Tales of Vesperia fails right out of the gate, embracing tired cliches with abandon. I don't want to spoil anything, but if you think someone might be a princess in disguise, you're probably right. The painfully linear and predictable story progress bogs down in an endless barrage of in-game cutscenes and dialogue exchanges. The end result is a largely forgettable yarn that goes where you expect.

Nothing I've said should discourage players who eagerly await the gorgeous visuals that the 360 provides to Tales. If you're still a fan of the old school approach to storytelling and gameplay, you'll be pleased to know that Vesperia is a tour de force of what you love. For the rest of us, this series meets our modest expectations, albeit with a pretty visual overlay.

7.25
About Game Informer's review system
Concept
Journey the world in a traditional Japanese RPG with gorgeous anime visuals
Graphics
The highlight of the game is the art style ? bright and inviting graphics draw easy comparisons to animated movies
Sound
The well-done voice work fits the tone of the story, but the music doesn't keep pace
Playability
While often too easy for experienced players, the familiar RPG conventions aren't hard to pick up or follow
Entertainment
It may be by the numbers, but the combat system keeps the game afloat
Replay
Moderately Low 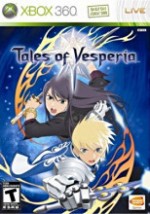