Capcom was heavily criticized in the early-to-mid '90s for putting out slightly altered versions of Street Fighter II ad nauseum. Each version offered a few new characters, an added mode or two, and some slight character tweaking, but at their core they were essentially the same game in different cartridges. With the release of Arcade Edition, it would be easy to make the same accusation, but at least this time it’s offered as reduced-priced DLC for those who already own Super Street Fighter IV (although a $40 retail disc is on the way). Whether or not I’d recommend SSFIV:AE depends entirely on what kind of fighting fan you are.

The most noticeable additions Arcade Edition brings to the table are Evil Ryu, Oni, Yun, and Yang. If you’re a casual Street Fighter fan, the former two seem like slightly altered versions of Akuma. They’re both super-evil, flaming fighters that rely heavily on fireballs, dragon uppercuts, and hurricane kicks. One or two special moves may fall outside of Akuma’s set, but they play remarkably similar to him. While the casual fans may see these two as reskinned versions of an existing character, the tournament crowd will assuredly pick apart their level of damage and combo capability and find more substantial differences.

Yun and Yang return from Street Fighter III, and they’re both speedy characters that are a blast to play as. Aesthetically, they look like the exact same character model with different hair (also, one is a rollerblader while the other is a skateboarder). Unlike Oni and Evil Ryu, these two don’t immediately resemble anyone else’s fighting style. They’re unique and quick, and are my favorite additions to Arcade Edition.

With new characters come new beginning and ending videos, but these fall into the same lackluster level of quality as the previous games. You’ll get a couple scenes of uninspired drawings, accompanied by generic voice-over and paper-thin story. Street Fighter fans have become accustomed to these movies seeming like afterthoughts, so it’s doubtful many will be surprised here.

Whereas Super Street Fighter IV introduced several new online modes, Arcade Edition simply adds extended support for replays. You can find replays of the top players in the elite channel, or even follow top players to get a constant stream of their newest bouts. This seems more geared to the tournament crowd, as casual fans probably won’t spend hours studying footage of top-ranked fighters.

Balancing has been introduced to many characters, which is another change directly focused at the hardcore fans. I’ve probably put 200 hours into the two previous versions of the game, and I still didn’t notice any major changes. However, the tournament crowd that scours message boards and memorizes hit boxes will surely appreciate the tiny tweaks.

If you are one of those players that takes their tournament stick around the country and competes against the best, you’ll undoubtedly want Arcade Edition in your collection. However, it’s harder to recommend if you’re on the more casual end. Two characters feel like reskins, so you’re basically paying $15 (or $40) for two similar characters. Street Fighter IV is one of the best fighters of the last decade, but it’s getting harder to justify spending money on what’s essentially the same experience. 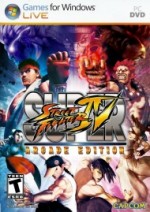 It may be one of the best fighters of the last decade, but
it’s getting harder to justify spending money on what’s essentially the
same experience

Purchase More Info
7.75
i
Game Informer's Review System
Concept Add four characters and some bonus replay features, call it a new edition
Graphics The same graphics you saw in 2009
Sound The same sound you heard in 2009
Playability Only the most hardcore fighting fans will notice the tweaks and balancing
Entertainment Street Fighter IV was a blast, and this is too if you haven't burnt yourself out on the game
Replay Moderately High