My first baseman is named Grunt Manly. Most of my pitchers itch their butts before throwing the ball. My team, the Herbisaurs, is taking on the Sirloins. Super Mega Baseball 2 doesn’t take itself too seriously, but that doesn’t mean you’ll see moonshot home runs or pitches corkscrewing comically to the plate. Despite the goofy setup, developer Metalhead Software delivers a surprisingly authentic baseball simulation that is both competitive and fun.

If you played the 2014 series debut of Super Mega Baseball, and the updated Extra Innings version, which released a year later, you know the series is slowly inching closer to realism. The player models, while still looking like they were yanked out of a children’s CG movie, no longer have overly expressive cartoon eyes, and their physiques lose the bobblehead qualities to look more appropriately human. The bats they wield are also slimmed down from the wide size often used by toddlers to smack wiffleballs.

The improved player models showcase nice animation touches like waggles in the batter’s box and stretching to catch a ball for a bang-bang play at first. However, the animations for fielding flyballs and grounders are still a bit stiff and slow, meaning they won’t get to everything you think they should. Even with a few balls squeaking by for questionable hits, the balance of play is spot on, usually delivering a similar number of hits, runs, and scoring opportunities you’d see in an MLB game. The balance stems from the beautifully designed pitching and batting mechanics, which allow players to work the plate and hopefully induce desired outcomes, like pitching outside to make a pull hitter nub a weak grounder. The pitching in particular feels fantastic, relying on timing-based reflexes to accurately paint corners of the plate. After selecting a desired pitch location, you must quickly move a reticle onto that spot before the ball leaves the pitcher’s hand. The closer you are, the more likely the pitch will hit that spot. If you want to put a little extra mustard on the pitch, the execution window is even shorter, meaning you may catch too much of the plate, but if you are successful, it’s harder to hit.

Batting also incorporates a risk/reward timing-based skill that pushes you to charge a swing and fill a meter as much as possible at the point of contact. Accomplishing this can be tricky, as pitchers have different deliveries and pitches fly at different speeds. Some guesswork is involved, but you don’t always have to charge the swing; standard contact is performed by simply tapping the button. Extra skill comes from angling the swing with a cursor.

Fielding is the weakest part of the experience. Most of it is handled by the computer, but you can always take control to do it yourself. This is ill advised, as the only way to read a ball’s trajectory is by its shadow. Even with the computer handling the basic flyballs and grounders, the user must initiate throws and jump or dive for balls. The latter of which is used more often than you would think, and ends up being quite fun in terms of spectacle and nailing the timing. If you aren’t on with your timing, a throw could sail past the fielder, or your dive may result in the ball hitting your body instead of the glove. There’s some fun to it, but I wish I had more of a hand in it. Base running is mostly solid, although A.I. players don’t always tag up on deep flyballs.

Super Mega Baseball 2 doesn’t offer many avenues of play. You won’t find Franchise mode, Home Run derby, drafts, or much depth anywhere. The big modes are Season, which can be adjusted from a full schedule down to just 16 games, and Pennant Race, an online mode that pushes you to win as many games as possible over a set amount of time. Given how fast games go thanks to the computer being eager to swing at almost everything, a short Season can be completed in an afternoon, and most of my Pennant Race games proved to be nail-biters. Both modes deliver plenty of thrills that bring out the best of the sport.

Super Mega Baseball 2 may not have the MLB or MLBPA licenses, but it does offer robust team and player customization. If you take the time, you can recreate the MLB rosters, and team colors, but it will take a skilled artist to make the logos, which can be edited and include artwork layers. Metalhead clearly knew people would do this, and even allowed for the conferences and divisions to be altered. Up to 32 teams can be customized for a league. As of now, there isn’t a way to download player-made rosters or teams.

As your skill level increases, you may need to bump up the difficulty. Thankfully, that doesn’t mean a jump from normal to hard. Metalhead devised a slick skill-based system called Ego, which allows the player to tick up the difficulty for batting, pitching, base running, and fielding.

Super Mega Baseball 2 delivers a rock-solid baseball experience that may come up light on modes, but homes in on the fun and skill of pitching and batting. I hope this becomes an annualized series, as Metalhead has a great foundation to build upon. 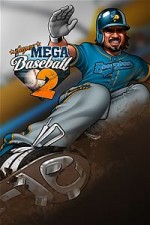 Purchase More Info
8
i
Game Informer's Review System
Concept Ignore the cartoon look. Super Mega Baseball 2 is an authentic baseball simulation with excellent skill-based gameplay
Graphics Player models are more detailed than in previous iterations, but animations are still a bit stiff
Sound The lack of commentary is filled by a nice array of stadium sounds – from the organ to the crowd reacting accordingly
Playability The timing-based pitching and batting capture the small nuances of the sport. Unfortunately, fielding is mostly automated, but does demand player input for exciting moments
Entertainment Don’t let the lack of modes turn you away. Super Mega Baseball 2 nails the fundamentals of the sport
Replay Moderately High