Sunless Sea is a macabre nautical trip through Fallen London and the Unterzee. The major draw is the lore behind this somewhat Lovecraftian backdrop of horrors in the unexplored darkness out in the sea. Unlike many roguelikes, the story is not a generic afterthought; Sunless Sea is almost half visual novel, half traditional roguelike. The mix works, driving you through the mist as you stretch your fuel reserves and hope to make to the next dock before your little boat sputters out in the black void.

The core loop involves staffing your ship with a solid crew, loading up on supplies and fuel, and heading out into the unknown abyss to discover all manner of terrors and mysteries. Each voyage holds the promise of uncovering untold secrets as you visit sunken landmarks, engage in the unique cultures on each Odyssey-style dock encounter, and wander into potentially disastrous situations. The ever-gnawing appeal of the next discovery drives you on, with the thought of death ever present – though a progression system assures that your legacy lives on.

Will you find some long-forgotten civilization? Will you perish in the cold dark, alone, mad, and feasting on your unfortunate sailors? I never knew what was waiting for me in the fog, and that irresistible curiosity drove me forward. The situations are grim, but wry humor peeks out beneath the surface. When exploring new areas, it’s always a good idea to do some research, reading, and reconnaissance first; one island culture revolves around masks, and wearing the wrong one can have devastating results.

You encounter monsters of the deep and deadly pirates as you maneuver the Unterzee, meeting odd denizens who provide your crew with stories to bring back to the people of Fallen London. These tales are worth collecting, since they bring in echoes (currency) to spend on ship upgrades, fuel and supplies, better lodgings to house your heir, and more. These upgrades are meaningful, allowing you to sail far from the safety of the docks of Fallen London and take on more powerful enemies. The combat, while quirky and entertaining at first, is threadbare with its simple aim-and-shoot mechanics. This isn’t a huge problem, as combat is not a major focus of Sunless Sea.

At the core of Sunless Sea is the concept of choice; players make decisions during each playthrough ranging from core crew members to the pursuit of plunder and romance. The “turn-the-page” system, with its mini-expositions on each bizarre slice of life in the Unterzee, works great on the isolated islands. However, it gets more unwieldy at the main dock at Fallen London; the many screens you must maneuver in a choose-your-own adventure fashion often loop back on each other, forcing you to fight against the byzantine menu as you select a deluge of options. Sometimes it’s challenging to get back to where you want to go in this maze of menus.

Sunless Sea is an interesting game that’s worth playing for those that appreciate a dark yarn, players that love exploration, and even the “let’s find out how to game the system perfectly” roguelike crowd. It’s a unique mix of genres that’s a finely crafted experience, marred by a few cracks in the cabin.

8
About Game Informer's review system
Concept
A richly told story unfolds in the dark depths of a sea within the world of Fallen London
Graphics
While they are threadbare, they do a fine job displaying the sea and its many locales
Sound
The score does a great job conveying the dual elements of mystery and despair that propel your journey
Playability
The tutorial is rather rough around the edges for a player new to roguelikes, with a tough-to-navigate UI and tome to read in addition to learning as you go, but once you have the basics down you should settle into the groove easily
Entertainment
It’s a rich, story-driven game of moving from island to island like some sort of Lovecraftian Odysseus. It’s engaging, but loads of screens to push through and lackluster combat detract from the experience
Replay
Moderately High 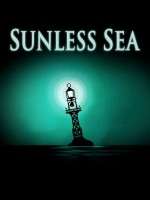