The worst part of my job is writing a scathing review of a game I was looking forward to. An economic city-building simulation feeding into freeform castle design and real-time medieval combat? Yes, please! I like what developer Firefly tried to do with Stronghold 3, but the utterly incompetent execution is a disaster.

Stronghold 3’s basic gameplay loop is intuitive and simple. First you set down buildings for your peasants to work. Then you keep them happy and fed by setting taxes, rations, etc. as they harvest and process resources like wheat, wood, stone, and iron. Once your economy is established, those resources can be turned into a variety of weapons to equip your armies and fortifications for them to defend in RTS combat. Depending on the scenario, you might be dealing with anything from collecting a set number of resources to hungry wolves in the forest or invading armies.

No matter which aspect of gameplay you look at, problems crop up in its implementation. Whether it’s the shallow, yet hard-to-manage economy or the fabulously broken pathfinding, the only difference between the systems is how poorly designed, infuriating, or merely boring they are.

Setting up your economy is simple to the point of absurdity; buildings take no time to construct and peasants automatically work any open slots. Yet you can’t see how your production chains are getting along other than manually checking your stockpiles of various resources. How many planks is a wood camp producing per day? Is something slowing down the progression of wheat to flour to bread? Who knows? Pursuing efficiency – the primary goal of most economic sims – is a matter of trial and error. Everything goes through the stockpile (of which you can only build one), so your miners have to deliver their iron to a central location where your smiths can pick it up instead of sending it directly. This means every town looks more or less the same, as there is only one “right” way to build.

Hand crafting your perfect castle should be the game’s highlight, and it is. Unfortunately, in Stronghold 3’s case, that means “sort of works like you’d hope but is nonetheless a massive disappointment.” Setting up traps like log drops and creating kill zones where enemy troops will get funneled into overlapping fields of archer fire is undeniably cool. In practice, however, the tiny maps mean you have an extremely limited canvas to paint on.

Combat is unbelievably awful. Not only is the pathfinding so broken that it gets units stuck inside buildings, but sometimes drag-selecting units – the most elementary of RTS actions – fails. Mouse interaction is so bad that trying to right-click an enemy to attack it gives a move order half the time instead, because you weren’t pixel-perfect on the unit model. Otherwise it might just do nothing at all for reasons unexplained. Sieges should be awesome clashes between defenders pouring oil and raining death through murder holes on hundreds of attackers. Instead, it’s archers getting confused as they try to find a line of sight to their targets while a dozen macemen gently wave their weapons at the base of the walls until they crumble.

You’d think that between Stronghold 3’s three modes you could find some entertainment, but each fails in its own unique way. The horrific combat sinks the several historical sieges available when they’re not flat-out crashing to desktop. Both the military and economic campaigns suffer from lame objectives and set-in-stone scripts that force you to find the “correct” route to victory rather than experimenting with creative solutions. Sandbox mode has little to recommend it; both (!) maps are so small that you can’t build anything impressive even with effectively unlimited time and resources.

I wish I could say something positive about Stronghold 3. The closest I can come is to call it Stronghold 1 with better graphics. Even that is unfair to the 2001 original, which at least worked on a basic level – a task sadly above Stronghold 3’s capabilities. As much as I wanted to like this game, I can’t recommend it in good faith to anyone. 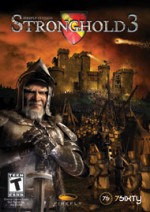 I like what developer Firefly tried to do with Stronghold 3, but the utterly incompetent execution is a disaster.

4
i
Game Informer's Review System
Concept Try to recapture the magic of the first Stronghold by sticking tightly to original design, but fail to make either the real-time strategy or the castle building fun
Graphics Even on a monitor whose resolution is supported (unlike my oh-so-esoteric 1920x1080), this looks muddy and unpleasant
Sound The lone bright spot in a sea of failure, the voice acting is spot-on cheesy British and the score is wonderfully evocative of the period
Playability The oversized UI doesn’t deliver all the relevant information, but it’s a delight compared to the broken pathfinding
Entertainment Get your city building and your RTS somewhere else, because you won’t find anything worthwhile of either here
Replay Low