Released today for the iOS, Stride & Prejudice brings players an endless runner game to Jane Austen’s Pride and Prejudice. The game, developed by No Crusts Interactive, gives players control of a running and leaping Lizzy Bennet. The levels are made entirely of the novel’s text, whose gaps players have to jump over.

Players can choose between survival mode, where you must start from the beginning of the novel, and reader mode, where the game picks up from where you die. Players can customize the scrolling speed and other reading preferences, allowing players – if they wanted to – to read the entire novel.

Be sure to scroll through the screenshots below. You can buy Stride & Prejudice for a dollar on the Apple store. The app is designed for both iPad and iPhone. 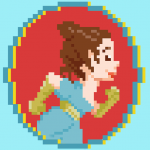